Pestilence, War, Death and Famine masterfully turned into brutal and obscure Death Metal by a heavier-than-hell unity hailing from Portugal. 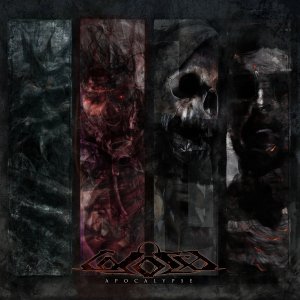 What if a vicious horde hailing from Portugal decided to turn the Four Horsemen of the Apocalypse, described in the last book of the New Testament of the Bible, the Book of Revelation by John of Patmos, into gruesome and raw Death Metal? That’s exactly what a project formed in 2011, currently comprised of Max Tomé on guitars, keyboards and vocals, Alexandre Ribeiro (Grog) on bass and Robin Stone (Norse) on drums, collectively known as Porto, Portugal-based Death Metal unity Colosso, has to offer us all in their brand new EP simply titled Apocalypse, translating into modern and sharp Death Metal all the darkness flowing from the four riders Pestilence, War, Famine and Death.

After years of toiling in the underground, putting out six releases of ever-evolving Death Metal such as their debut full-length opus Peaceful Abrasiveness, in 2012, and more recently Rebirth, in 2018, Colosso seem to have reached their most demonic shape and form in Apocalypse, being highly recommended for fans of the music by Norse, Morbid Angel, Nile, Incantation and Suffocation, among other behemoths of extreme music. Mixed and mastered by Max Tomé himself, and featuring a beyond obscure album art by Phlegeton Art Studio, as well as guest vocals by Guilherme Henriques of Oak and Gaerea, Diogo Santana of Analepsy, and Sérgio Afonso of Bleeding Display, Apocalypse is an undoubtedly breathtaking and refreshingly diverse album, showcasing the myriad aspects of this bold and innovative Death Metal band without compromising on their aggressive, apocalyptic sound.

And pestilence and plague permeate the air in the vicious and heavy-as-hell Pestilence, blending the violence of Death Metal with the grim and infernal sounds of Blackened Doom while guest vocalist Guilherme Henriques barks and roars like a creature from the netherworld. Not only that, Robin smashes his drums mercilessly nonstop, with that disturbing and evil onrush of sounds going on and on until the song’s visceral ending. Then guest Sérgio Afonso lends his guttural vocals to Colosso in the also Stygian tune War, with the sounds of machine guns and explosions making the whole song even more realistic, leaning towards classic Death Metal. Moreover, Alexandre’s bass jabs and Robin’s beats feel like the epitome of evil, resulting in a pulverizing display of extreme music for lovers of the genre. 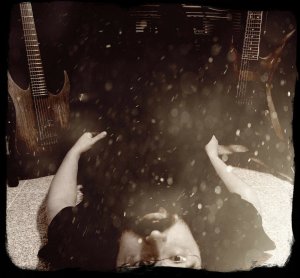 Max himself is responsible for the vocal duties in Death, a lot more melodic and crisper than its predecessors while still providing the band’s characteristic rawness and darkness. Furthermore, Max is spot-on with his razor-edged riffs accompanied by Robin’s intricate drums and, as a surprise, Max fires clean, ethereal vocals instead of the album’s characteristic putrid gnarls, bringing elements from Atmospheric Black and Doom Metal to Colosso’s core savagery. And last but not least, Diogo Santana provides his share of deep guttural roars to Famine, where the band gets back to their most demented and hellish mode, showcasing all band members in total sync led by Max’s strident riffs, while Robin sounds like a stone crusher on drums and, as a consequence, flirting with Brutal Death Metal at times.

In summary, if you’re an admirer of the meanest and heaviest side of Death Metal you must give these Portuguese metallers a very good try as Max and his henchmen have all it takes to explode your mind and darken your soul with their brand new installment Apocalypse, which by the way will soon be available from the band’s own BandCamp page and from the Transcending Obscurity Records’ webstore in distinct formats such as the awesome T-shirt + CD + Digital Download bundle. Also, don’t forget to show your support to Colosso by following them on Facebook and by listening to more of their somber creations on Spotify. As the four dreadful figures in the Book of Revelation who symbolize the evils to come at the end of the world get closer and closer to us, there’s nothing better than the avalanche of Death Metal roars crafted by Colosso to provide them a warm and friendly welcome, don’t you agree?

Best moments of the album: War and Famine.