Do you dare to submerge thyself within the daeva’s very depths? Then let this peculiar Swiss duo offer you the perfect soundtrack to that with their brand new opus of Zoroastrian Death Music. 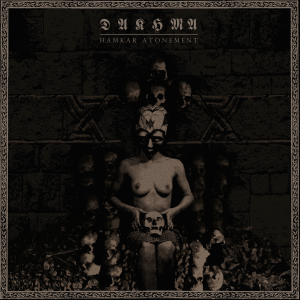 Dakhma (Avestan for “grave”) is a term for a ”Tower of Silence” (which is an English neologism), a circular, raised structure used by Zoroastrians for exposure of the dead, particularly to scavenging birds for the purposes of excarnation (although in the Avesta, the term is pejorative and does not signify a construction of any kind). In heavy music, the term is used to name the cryptic and hellish Blackened Death Metal entity Dakhma, who are releasing their first full-length opus, the enigmatic Hamkar Atonement. Formed in 2014 in Zürich, the largest city in Switzerland, the band comprised of Kerberos on “Howls of Druj and Rites of Purification” (vocals, guitar and bass) and H.A.T.T. on “Thunderstorm of Daeva” (drums) plays what they like to call “Zoroastrian Death Music”, with their new album being a work of towering immensity, of unorthodox ritualism and subverted bestiality, descending and ascending with seven hymns within a staggering 61 minutes in a total sensory overload, an immersion that begets annihilation that begets rebirth.

As Dakhma explain of the title, the Avestan word “Hamkar,” which literally translates to “co-worker” or “helper,” is used in reference to the daeva of Angra Mainyu (Ahriman in middle Persia), himself the omnimalevolent and most destructive spirit. In the collection of texts describing Zoroastrian cosmogony and creation, traditionally called Bundahishn, Angra Mainyu creates a horde of daeva to counter the creation of cosmos by Ahura Mazda (Ohrmazd or Ormuzd in middle Persian), with each daeva mirroring an opposite Amesha Spenta. In mirroring the tasks of the Amesha Spentas as servants of Ohrmazd, daeva are the instrument through which Ahriman creates all the horrors in the world. Following the interpretation laid out in texts such as the “Shayest ne shayest,” where the daeva are seen as being utterly real and not mere philosophical representations, the music contained on Hamkar Atonement describes creation through the ultimate destruction of Ohrmazd’s good deeds, good thoughts, and good work by the daeva. Hamkar Atonement begins with the demise of Ohrmazd and therefore the destruction of all that is holy on the earth, allowing the daeva to roam free and corrupt human existence, described in greater detail throughout the album. Each song serves a specific narrative purpose, be it the dedication to a specific daeva or describing the results of their exploits on earth.

An esoteric intro ignites an 11-minute feast of wicked and tribal sounds titled The Glorious Fall of Ohrmazd (Hail Death, Triumphant), with the vociferations by Kerberos crawling deep inside your mind, mesmerizing your senses and haunting your soul, until all hell breaks loose and sheer darkness is unleashed with H.A.T.T. crushing his drums manically. And their scorching hot riffs, thunderous bass lines and pounding beats keep shaking the foundations of the earth in Akhoman (Spill the Blood), another full-bodied display of their Zoroastrian Death Music where Kerberos delivers some deep, obscure roars, effectively blending old school Black Metal with the visceral sound of Death Metal, just as devastating as its predecessor. Following such distinguished tune we have Varun (Of Unnatural Lust), where tribal, ancient drums are gradually joined by eerie noises and tones, until the music explodes into rumbling and vile Black Metal for our total delight. Furthermore, the sound of the bass by Kerberos is amazingly thunderous and vibrant, adding an extra layer of dementia to the overall result.

In Nanghait (Born of Fire) the duo sounds even more tribal than before, generating a reverberating exhibit of Black and Death Metal led by the demonic roars by Kerberos while H.A.T.T. is simply bestial on drums, with their wicked extravaganza of sounds going on and on, leaving you disoriented and eager for more of their Blackened Death Metal, ending in an absolutely raw and cryptic manner. Then smooth and serene tones permeate the air in the atmospheric instrumental bridge Spendarmad (Holy Devotion), elevating your soul to new heights and preparing you for the Stygian and visceral Gannag Menog (Foul Death, Triumphant), where the duo takes their Black Metal to a more menacing level, with the guttural growls by Kerberos growing in intensity and getting as deep as hell. In addition, the piercing riffs and bass punches by Kerberos bring tons of electricity to the musicality, with the song’s ending being as crazy and imposing as possible,  building an instant connection with the closing hymn titled …Of Great Prophets, with Kerberos extracting a strident sound from his guitar; and just like what happened throughout the entire album, the music remains mysterious and austere from start to finish, taking you on a one-way trip to the band’s dissident world of Extreme Metal, also showcasing somber breaks intertwined with pure devastation that turn the experience of listening to this breathtaking song truly unique.

In summary, it’s not every day that we face something so peculiar and gripping as the music by Dakhma, with Hamkar Atonement representing to perfection the true meaning of Zoroastrian Death Music. In order to show your utmost support to this infernal Swiss duo,  go check what they’re up to on Facebook, and grab your copy of the whimsical Hamkar Atonement from the Iron Bonehead Productions’ BandCamp or webstore, as well as from the Hells Headbangers’ webstore, from Record Shop X or from the Shadow Kingdom Records’ webstore. In other words, do you dare to submerge thyself within the daeva’s very depths? Then let Dakhma offer you the perfect soundtrack to that with Hamkar Atonement.

Best moments of the album: Akhoman (Spill the Blood) and Nanghait (Born of Fire).