A stunning expedition through the depths of human mind, crafted by proficient Finnish metallers whom no light follows. 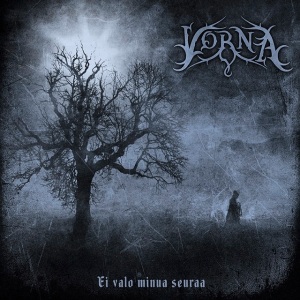 As I stated earlier this year in the review for the self-titled debut album by Stoner/Progressive Metal band Sata Kaskelottia, and also in the review for the 2005 classic Metallitotuus, by Power Metal band Teräsbetoni, anytime I receive material from a band from the land of ice and snow that’s sung in their mother tongue I get quite excited about what I’m about to listen to. It couldn’t be any different with Finnish Black/Pagan Metal orchestra Vorna (named after a character from the Finnish folklore), who have just release their second full-length album, an incredible full-bodied expedition through the depths of human mind entitled Ei Valo Minua Seuraa (or “No Light Follows Me”, in English).

Dealing with themes like nature, myths and struggles of mind, this ascendant six-piece group formed in 2008 in Tampere, Finland are an exquisite treat for all fans of Black, Pagan and Folk Metal, and their new album will blow your mind no matter how much you love (or even hate) those subgenres of metal music. From its minimalistic and gorgeous artwork, designed by Jarno Lahti (KAAMOS Illustration & Design Studio), to its intricate passages and somber atmosphere, Ei Valo Minua Seuraa offers all metalheads a memorable feast of darkness, all spiced up by the uniqueness of the Finnish language, of course.

The name chosen for the album is already legitimated by its opening track, the pleasant and dark Harmaudesta (“Away from Grey”), where the orchestrations blend perfectly with the harsh vocals by Vesa Salovaara, while the obscure keyboard notes by Saku Myyryläinen, together with the precise drumming by Mikael Vanninen, boost the song’s impact significantly. In Jälkemme (“Heritage”), a sense of epicness emanates through its soaring ambience, inducing a strong feeling that the battle is about to begin. In addition to that, Arttu Järvisalo and Henri Lammintausta do an excellent job with their flaming guitars by adding elements of Black and Viking Metal to their riffs. 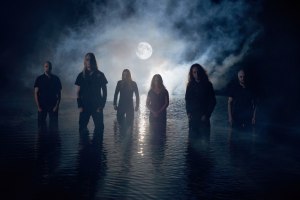 Their symphony of darkness goes on with a fusion of Melodic Black Metal and the band’s core Pagan Metal in Itsetön (“Soul Shriven”), a hellish waltz flawlessly crafted by the entire band until everything morphs into a melancholic ending; whereas Sieluni Varjossa (“In the Nightside of Self”) presents a sharper sonority thanks to the beats by Mikael and to the solid and resonant bass lines by Niilo Könönen. Moreover, the second half of the song is pure obscurity, perfect for afflicting your soul before the serene Vaipunut (“Of Life Descended”) arises full of melancholy and sorrow. It’s almost like a Dark Metal ballad, very interesting and gripping, showcasing the band’s versatility and Vesa’s clean vocals, which sound as powerful as his guttural.

All that sorrow keeps flowing in the amazing Yksin (“Alone”), with Saku leading Vorna’s metallic orchestra while Arttu and Henri continue to darken the music with their riffs, turning this song not only into the best of all tracks but, more important than that, into a beautiful aria of solitude, fear and sadness. And Vorna lead the listener to one final fight in Hiljaiset Rauniot (“Silent Ruins”), an emotive and razor-sharp chant with an inspiring intro and atmospheric keyboards, and where you can feel death is imminent through both the growls and clean vocals by Vesa, efficiently ending such a distinct album.

This proficient Finnish orchestra can be reached at their official Facebook page and YouTube channel, and their Stygian concerto Ei Valo Minua Seuraa can be purchased through the Inverse Store, Record Shop X or CDON.COM. Indeed no light follows Vorna, but that doesn’t mean their music is dull or unreverberant. Quite the contrary, Ei Valo Minua Seuraa is doubtless one of the brightest releases of the year.