Inspired by the Norse myth of the Ratatoskr, this Russian power trio brings forth nine first-class atmospheric and upbeat compositions in a unique fusion of genres labeled by the band as “Urban Folk Metal”.

Brothers in arms, behold the rise of an awesome Russian Urban Folk Metal horde known as IceThurS who, guided by the one and only Ratatoskr, are going to put us all to dance around the fire pit and engage into some brawls to the sound of their debut full-length album, the uproarious, fun and catchy Unlocked Door (or НЕзапертая дверь in Russian). In Norse mythology, Ratatoskr, Old Norse for “drill-tooth” or “bore-tooth”, is a squirrel who runs up and down the world tree Yggdrasil, an immense mythical tree that connects the nine worlds in Norse cosmology, carrying messages between the Veðrfölnir (a hawk sitting between the eyes of an unnamed eagle that is perched on top of the tree) and the wyrm Níðhöggr (a dragon who gnaws at a root of the tree). If you got slightly lost with the explanation of who our hardworking squirrel is, just see it as a symbol of degeneration and constant change of the existing, the main ingredients of a diverse album evoking the feelings of joy, festivity, sadness, victory and defeat, sometimes all in one song.

Formed in 2011 in the city of Moscow, IceThurS bring forth a unique blend of modern Melodic Death Metal with traditional Folk Metal and Russian music in Unlocked Door, resulting in atmospheric and upbeat compositions that live up to the legacy of ancient Slavic tradition and myth. Singing about topics such as nature, paganism and Norse folklore, the power trio formed by lead singer Ekaterina Loky, guitarist Anton Garm and bassist Andrey Konurovskiy, supported by a legion of amazing guest musicians on bass, drums, backing vocals and other instruments, delivers nine distinct songs in Unlocked Door that will surely entertain you from start to finish, each one telling their own story and all being an important part of the bigger picture proposed by the band.

Get ready to start dancing and prancing while drinking a pint of mead as their Urban Folk Metal comes crushing in the opening track En Sjörövare Sagan (Пиратская Сага), where the fantastic vocals by Ekaterina guide the listener through a vibrant folk journey with highlights to the harmonious and electrified solo by Anton; followed by Gift (Дар), with its futuristic beginning morphing into modern Folk Metal with elements of Alternative Metal added to the background, while Ekaterina’s vocals continue to hypnotize us. In addition, guest bassist Igor Batsov provides the musicality his special blast of grooviness through his metallic lines, enhancing the overall quality of this solid tune. Then we are treated to a fun devastation brought forth by IceThurS entitled Compotator (Собутыльник), an explosion of Death Metal where Anton is a beast with his guitar, delivering a blend of Thrash and Death Metal riffs that sound at times like a folk version of Arch Enemy. 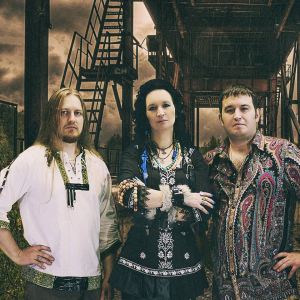 Getting back to their foundations, the band brings forward White Road (Белая дорога), a charming Folk Metal chant where Ekaterina has a very passionate performance whereas guest drummer Efim Burak makes the song more potent and aggressive through his beats, with its second half being a violent and melodious display of modern folk. Efim continues to pound his drums in the epic and thrilling Loki (Локи), supported by guest bassist Ivan Izotov, providing Ekaterina what she needs to showcase all her vocal range throughout the entire song. And exhibiting elements from the band’s cultural background, Razguliai (Разгуляй)  reminds me of some of the creations by their countrymen Arkona, sounding very traditional but with the band’s modern touch added to it. The only issue for me is that the song loses some of its electricity after a while, despite still being very enjoyable until the end.

The rebellious War (Война) presents a powerful vocal duo comprised of Ekaterina and guest singer Dmitry Stempkovsky, an enraged song with blazing guitar lines and a very melodic atmosphere that will inspire you to raise your fists and glasses in the air, before Vengeance of Veles (Велесова месть) offers the listener once again modern extreme music mixed with traditional Russian elements. Furthermore, Ekaterina fires some sick growls while Andrey smashes his bass strings in a potent way in this beer-drinking anthem, and if you know nothing about Russian please enjoy the translation to part of the lyrics as they’re truly poetic (“Everything that existed before / And was pleasant for heart / Became our ice grave / Let the blood in the veins / Get cold / Fury has raised up / This heart”). Last but not least, the title-track Unlocked Door (НЕзапертая Дверь) is sheer heaviness blended with an intricate instrumental, all spiced up by Ekaterina’s thrilling vocal lines. Showcasing a beautiful balance between demented gnarls and folk clean vocals, this full-bodied composition perfectly depicts everything IceThurS stands for.

IceThurS and their wild Slavic music are waiting for you on their Facebook page, VKontakte and YouTube channel, and if you want to take the fast Ratatoskr home you can go to the Bud Metal Records’ BandCamp page, to the band’s Facebook shop, to iTunes or to Amazon and grab your copy of Unlocked Door. In other words, enter the world of Urban Folk Metal crafted by IceThurS, and consequently make a friendly mythological squirrel extremely happy, how about that?