Profane, rebellious and vicious music for all diehard lovers of Black Metal, piercing your ravenous ears directly from the UK. 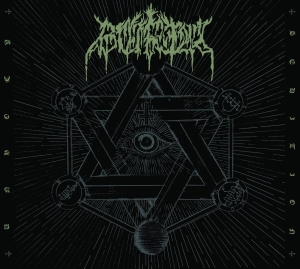 The good old city of Manchester, England might be known worldwide by the everlasting rivalry between Manchester City and Manchester United, two of the biggest soccer teams in the world, but since 2005 the city has also become a synonym to extreme music due to the scalding Blackened Death Metal forged by an up-and-coming power trio that goes by the name of Burial. After releasing a demo in 2008 named Shadowed by Satan, the EP Dissidence in 2010 and more recently their debut full-length album Beneath the Light in 2013, those black metallers are back with their second opus, entitled Unholy Sedition, a must for lovers of Black Metal, nuns, beer and Satan.

Fans of the music played by bands like Satyricon in their early days will have a great time listening to what this underground British act is capable of offering, being visceral but extremely technical at the same time. In addition, if you already know Burial you’ll notice a slight change in their musicality from their previous album, dropping part of the Death Metal sound and delivering an all-out Black Metal assault. In case this is your first contact with the band, get ready for 30 minutes of brutality in the form of the short, fast and devastating tunes found in Unholy Sedition. You won’t regret being blasted by the band’s ferocious music, I should say.

After a quick distorted intro, the opening track Infernal Spirit brings forward brutal Black Metal led by the bestial beats by drummer David Buchan, while lead singer and bassist Derek Carley varies his vocals from devilish screams to cavernous growls; and without a break they start firing the following tune, entitled Malevolent Possession, displaying some pulverizing riffs by guitarist Richard Barraclough. Not only that, even when they slow down a bit during this enraged song their heaviness remains at an outstanding level. Their malignancy keeps flowing in Satanic Immolation, a sick Black Metal song with hints of Death Metal where it’s amusing how violent the band can get in less than three minutes, with Derek’s vocals sounding exactly as many old school Black Metal vocalists.

In the high-speed havoc Coven of Death, David is unstoppable behind his drums, providing Richard the support he needs to craft his blazing riffs before we’re treated to Nothing Awaits, where a Blackened Doom-inspired intro powered by the gruesome vociferations by Derek suddenly explodes into vile Black Metal, with highlights to the metallic guitar lines by Richard. This is perhaps their best song to date, an excellent composition sounding as three distinct songs in one, and therefore showcasing the band’s highly developed abilities with their instruments. And in the rhythmic and dense Defile The Sacrament, right after a somber intro that goes on for almost two minutes, we have a furious fusion of Black and Death Metal with Derek barking like a rabid beast.

Cast To The Flames can be considered the most old school Black Metal of all tracks with the blast beats by David being its guiding “star”, never letting the level of dark energy go down; whereas Beyond Redemption seems to be the most Death Metal of all mainly due to the deep guttural growls by Derek, with its beats at the speed of light demolishing everything and everyone that stands in their way. Before Uholy Sedition comes to its end, Burial offer us all more of their putrid growls and a heavy atmosphere in the Black Metal hymn Devoured By The Earth, displaying sheer violence and gore in the form of music with highlights to the groovy and boisterous drumming by David. And lastly, we have the remarkably short but sensational Extreme Metal anthem Nun Fucking Black Metal, which not only has a beautiful name but also pays homage all things Black Metal, concluding the album on a high note with amazing performances by all band members.

In case you want to know more about the music by Burial, go visit their Facebook or ReverbNation pages, and if you’re interesting in putting your hands on a copy of Unholy Sedition, you can find the album for sale at the UKEM Records’ BandCamp page or webstore (it’s out of stock according to the website, though), or at the band’s official Big Cartel page, where you can also find a nice exclusive bundle including a physical copy of the album and a T-shirt for a very decent price. It’s profane and rebellious Black Metal for diehard lovers of the genre, and also a great option for newcomers to get introduced to the world of extreme music.