The devastating new album by this Blackened Death Metal band from Chicago is undoubtedly the perfect soundtrack for the total extermination of our species. 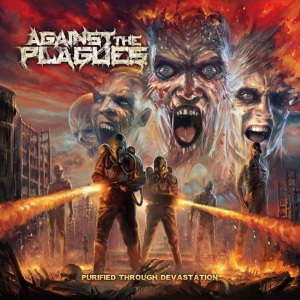 We all know that the human race has proven countless times to be a failed experiment of Mother Nature and that, consequently, there’s only one last resort to restore balance to the world, which is the total extermination of our species. Thus, as there’s no other way out, why not conducting that mandatory purge to the sound of the demolishing music found in Purified Through Devastation,  the brand new release by American Blackened Death Metal act Against The Plagues?

Based in Chicago, Illinois, this brutally heavy and technical band has been pulverizing the world with their Blackened Death Metal since their inception in 2005, mixing speed and slower tempos in a precise and explicit way for the delight of fans of extreme music. Featuring another first-rate artwork by renowned Swedish artist Pär Olofsson (you might remember him from some of our previous reviews such as the latest albums by Exodus and Irreversible Mechanism), six of the nine tracks in Purified Through Devastation were already part of either their 2012 EP The Quaternion or their 2015 EP Extermination Event, which altogether offer the listener a concept album that will leave you disoriented after its 47 minutes of annihilation are over.

Their pulverization begins in less than five seconds in Man’s Modern World, where lead singer Shaun Albro delivers potent screams and growls (hence leading the band’s dense musicality) while drummer Varyen Chylinski shows no mercy for mankind, sounding like a machine gun behind his drums. The brutal and atmospheric All Flesh Had Corrupted, showcasing a more modern version of Death Metal due to its background sounds, continues the band’s carnage and also presents some amazing guitar lines by Jon Corston and Aaron Covarrubias, especially their solos. And what can be said about Praetorian Icon, slightly faster, heavier and more demonic than the previous tracks, reinforcing their impressive technique to sound so destructive and tuneful at the same time? 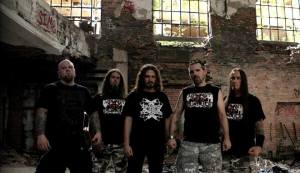 The next song, Theokratia, is a magnificent neck-breaking chant perfect for admirers of Melodic Death Metal but with sharper instruments, in special the bestial drumming by Varyen and the even deeper growls by Shaun. And their heavy artillery doesn’t give any sign of slowing down as seen in TerrorForm, where hints of Symphonic Black Metal blend perfectly with their traditional shredding, beats and screams, making it a highly-recommended tune for getting smashed in the circle pit. The same is valid for the awesome chant Extermination Event, where its initial siren alerts a scathing bloodshed is about to begin in the form of demented Death Metal.

Let’s say the album needed a short break from all extermination going on with the instrumental track Falling Further, but it’s just for less than two minutes before the psychotic tune Enblightened comes crushing your skull with its Black Metal elements, enhancing the already amazing harsh vocals by Shaun. And lastly, we have the threatening Enemy Herein to close the album, with all instruments getting darker than usual and Jon and Aaron firing more of their striking guitar solos.

Against The Plagues can be found on Facebook and ReverbNation, and there are so many awesome versions of Purified Through Devastation available for sale I don’t know where to start. You can grab your copy of the album at their BandCamp page, a limited edition CD signed by all members at their Big Cartel page, and both the regular version of the album or a special combo CD + T-shirt at the Non Serviam Records webstore. If the brutal extermination of mankind deserves a proper soundtrack, Against The Plagues are indubitably the ones to help us with that gruesome task.