Overflowing rage, despair and electricity, the brand new album by this implacable Colombian act will certainly help the band cement their name in the Extreme Metal underground scene worldwide. 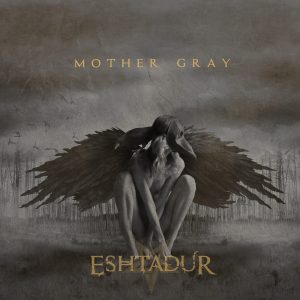 Formed in the fall of 2005 in Pereira, the capital city of the Colombian department of Risaralda, Melodic Death/Black Metal act Eshtadur has been on a roll since their inception, making a name for themselves in all four corners of the world with their unrelenting fusion of extreme sounds in the vein of bands such as At The Gates, Behemoth, Soilwork, Dimmu Borgir and Septicflesh, always adding imposing and symphonic elements to their music to make it even more impactful to our ears. For instance, the band has already toured Colombia, Peru and Mexico, they headlined a stage at Rock Al Parque (which is not only the largest rock festival in Colombia and one of the most important in Latin America, but also arguably the largest free rock festival in the continent) in 2016, and they’re getting ready for their first ever US dates and many other festival appearances in the coming months.

Having already released the full-length albums Dominated by Dummies, in 2011, and Stay Away from Evil and Get Close to Me, in 2013, as well as their debut demo Rebellion of Angels, in 2007, and the EP Oblivion, in 2015, the band comprised of Jorg August on vocals and guitars, Alejo Bet on guitars, Victor Valencia on bass and Mauro Marin on drums is effectively expanding their exposure to the metal scene worldwide with their third full-length installment, the excellent Mother Gray, featuring a classy artwork designed by French artist Sylvain (Razorimages), guest guitar solos by Christofer Malmström (Darkane), and an endless amount of electricity and rage flowing from all their instruments, all led by the desperate growls by Jorg.

The heavy and dark guitars by Jorg and Alejo ignite the aggressive opening track Belong To Nowhere, a high-end fusion of Symphonic Black Metal with Death and Melodic Death Metal where Mauro sounds possessed with his demonic blast beats while Jorg screams in a rabid and desperate manner throughout the entire song. Building an instant connection with the previous tune, Plaguemaker keeps the menacing aura crafted by the band even stronger, displaying a good balance of guitar lines, growls and potent drumming, while the keyboards in the background give it a Dimmu Borgir-inspired vibe; followed by the Melodic/Symphonic Metal aria Cornered At The Earth, where the band engages in their most sinister mode by deepening their growling and strengthening their beats, culminating in a violent and gripping rhythm boosted by its dark lyrics (“Gray the future and gray the earth / Dust in the soil, foil the religion / And the permanent conclusion of being the one who brings pest /Back to the world”). Whereas the Doom Metal-inspired Desolation brings forward a melancholic intro that slowly grows into an imposing sonority, as heavy and dense as it can be, with some faster moments to keep it fresh and vibrant. Moreover, the desperation flowing from the vocals is outstanding, going on and on until the song’s visceral ending to the sound of deep and putrid roars. 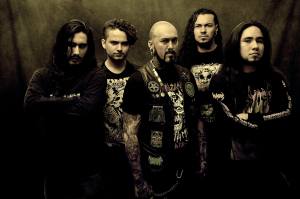 Getting back to a faster and more melodic sounding but still presenting the band’s characteristic symphonic elements, also showcasing fiery guitar riffs and solos as well as total havoc blasted by Mauro’s insane beats, the powerful Time Hole To Paris will certainly generate some sick mosh pits during their live concerts, while in March Of The Fallen we face an epic and somewhat funereal beginning to yet another ominous creation by Eshtadur, an eccentric “waltz” of Dark Metal with its keyboards and vocals taking the obscurity to a whole new level, again presenting more of those putrid gnarls before all is said and done. And as their “formula” seems to be one Stygian song followed by a sonic demolition, it’s time to speed things up again with the high-octane chant The Day After I Die, presenting slashing guitars blended with epic keys and rabid growls, without a single second of peace during its five minutes of sheer devastation.

As the first bonus track added by Eshtadur to Mother Gray, we have another symphonic extravaganza that will attack our senses named Heavens to The Ground (originally released in their 2015 EP Oblivion), with the guitars by Jorg and Alejo and the drumming by Mauro being in absolute sync, while the song’s keys make sure the atmosphere remains eerie for the otherworldly vociferations by Jorg.  The second bonus offered by the band is entitled Last Day Of The Condors, also from their EP Oblivion, sounding slightly similar to its predecessor (in special its guitar and vocal lines), not as tasty but still very enjoyable. And lastly we have a very cohesive, potent and fresh version they recorded in 2014 for Survivor’s hit Burning Heart (check out the original version HERE) featuring guest musicians Björn “Speed” Strid (Soilwork) and Christopher Clancy (Mutiny Within) on vocals, and Per Nilsson (Scar Symmetry) and Allan Marcus (Arecibo) on lead guitars. Survivor might be better known by the usual rocker for the all-time Rocky Balboa-classic “Eye of the Tiger”, but this song also represents all the passion Survivor had for rock music, not to mention this cover version is Eshtadur’s own tribute to Survivor’s longtime frontman Jimi Jamison (R.I.P.), who died of a heart attack in September 2014.

If you enjoyed all the fury blasted by Eshtadur in Mother Gray, I highly recommend you go check their Facebook page and YouTube channel for more of their kick-ass music, and if you want to purchase Mother Gray (which you can listen in its entirety on Spotify), you can grab your copy of the album at the Bleeding Music Records’ BandCamp, on iTunes, on Amazon, or at several other locations such as Barnes & Noble and ImportCDs. As mentioned in the beginning of this review, Mother Gray overflows rage, despair and energy, and as you’re more than aware of, those are some of the main elements which make us love Heavy Metal so much. In other words, Eshtadur nailed it with Mother Gray, surely making all metalheads in Colombia proud of their music.

Best moments of the album: Belong To Nowhere, Cornered At The Earth and Time Hole To Paris.