Bob is not alone anymore, and that’s more than enough to make him happy even in the middle of the apocalypse.

If you haven’t seen Alone yet, I suggest you scroll down to the end of this post first and watch the entire episode before reading the rest of the text.

Would you rather be alone or surrounded by other people in a zombie apocalypse? What if you choose to be with others, then you learn to like them, love them and live for them, just to learn that one day you’ll lose them and things are going to be even worse than when you’re completely by yourself? In my opinion, those were the biggest questions The Walking Dead wanted to left to the fans after last night’s episode. There were no answers to other important things, like where Rick, Carl and Michonne are, what Terminus really is or what happened to Glenn, Tara and Sergeant Abraham, though.

This episode was almost totally focused on the relationship between Bob and Sasha, with the inclusion of Maggie as the “desperate wife looking for her husband”, and more stupid scenes with Daryl and Beth “trying” really hard to screw up everything. By the way, it looks like one of the fan-favorite characters is becoming more and more like a rebel teenager, instead of growing up and becoming a man like Carl is. Again, are the writers trying to get more attention from the young female audience that’s afraid of zombies, and just want to watch the show because of Daryl? That’s not a wise choice of what to do with a good character, not at all.

But let’s go back to Bob, our main character in “Alone”. We finally got to know something about his past: poor Bob was just another lonely soul in a post-apocalyptical world, totally by himself, hopeless, wandering through the woods and facing at the same time his issues with alcohol and lots of flesh-eating zombies. We all have to admit that situation would be among the worst ones for any person with a heart and a soul, right? That’s exactly what Bob acknowledged after the attack at the prison that almost left each survivor on his own. Bob knows he’s the only person inside the prison that didn’t lose a loved one during or after the battle, and now for the first time in his post-apocalyptical life he’s not alone. He said there was some kind of “curse” on him, that he’s always the only survivor of his group, but fortunately it seems his fate has changed after being accepted at the prison (the third group in his life). In the end, that’s a very good reason for him to keep smiling even amidst so much destruction and death, and even after almost being bitten by a walker he looked relaxed! Well, Bob knows loneliness can be a lot more painful than any zombie bite, no doubt about it.

On the other hand, it takes some time for Sasha and Maggie to realize that, and therefore we see them struggling with their hopes and fears for too much time, not sure where to go and what to do. Sasha is more like that type of survivor that just wants to find a place to sleep and rest for some time, and she doesn’t want to think about Tyreese’s fate not even for a second, so strong is her fear of having lost him forever, while Maggie is just worried about finding Glenn no matter what (and that includes using zombie guts to create signs for Glenn!). One thing that I cannot stop thinking about is: what happened to Maggie’s southern accent? She sounds a lot more British now, has anyone noticed that too? Anyway, by the end of the episode, and after killing a bunch of zombies in very gruesome ways, they are ready to head to Terminus and finally find out if their loved ones are there too. 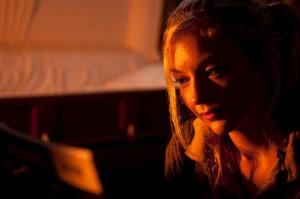 Last but not least, I truly didn’t want to talk about Daryl and Beth anymore after last week’s episode, but as the writers are focusing on that new “romantic duo” there’s nothing we can do about it. While they were at that mansion/morgue pretending life was normal and eating junk food even surrounded by dead corpses with weird makeup, I was wondering how that scene would have been with Merle instead of Beth. The “Dixon Brothers” would never have been so sloppy or reckless like that. Daryl has officially put his guard down after losing his big brother, and guess what? They were ambushed by a mysterious psycho, who kidnapped Beth while Daryl had to fight against dozens of zombies attracted to the house by that eerie person. That was extremely predictable, and making Daryl look like a “crying boy without his new girlfriend” after that didn’t work well. At least now Beth will face some real danger and maybe stop being so childish, and let’s hope Daryl turns all his despair and desolation into anger, gets back to the old days, and uses his famous crossbow to kill those mercenaries, especially the one who seems to be their leader. His name, by the way, is Joe.