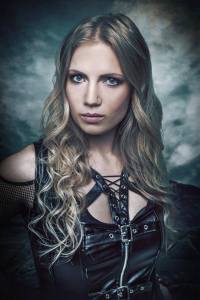 The heat that licks my skin, it takes me high…

Brothers and sisters of metal, let’s all get together to praise our metal chick of the month of April 2018, the stunning Finnish soprano and vocal coach Elina Siirala, better known for being the founder and frontwoman for English Melodic Metal band Angel Nation (formerly known as EnkElination), and for joining German Symphonic/Viking Metal act Leaves’ Eyes as the second female vocalist in the history of the band, replacing the iconic Liv Kristine. Having said that, are you ready to know more about such talented musician, and obviously head into the battlefield side by side with her?

Elina was born on October 27, 1983 in the Finnish capital Helsinki, being the second cousin of Tuomas Holopainen, well known founder and keyboardist of Nightwish. And let’s say that music truly runs in her veins as her whole family is comprised of musicians, not to mention she’s the third generation of teachers, with her passion for singing having started at a very young age when she was only 5 years old. Both her parents are teachers at the renowned Sibelius Academy in Helsinki, and her brother works as a professor in Munich, which means there was a lot of singing, playing and listening to music in her life while she was growing up. One funny story about her passion for music was that she basically begged her parents to start violin lessons, even building her own violin out of a piece of wood and rubber bands. She ended up playing the violin for seven years and also learned how to play piano by herself, but in the end singing was always what she loved the most in music.

After taking singing lessons at the age of 17, Elina got into the Metropolia University of Applied Sciences in Helsinki two years later, completing a Bachelor’s degree in classical music and performing in operas and concerts during that period, and after finishing her studies she decided to broaden her knowledge by moving from Helsinki to London, England, where she spent another year studying contemporary styles such as Rock & Soul (a very challenging one vocally speaking according to Elina herself), a course that also included a lot of performing by the way. In addition, throughout all those years of study, she was also a music teacher and wrote a lot of music, which culminated in 2011 with the creation of her own band EnkeliNation. As a matter of fact, her move to London was the true catalyst of her love for heavy music, with some hard times in her personal life being a source of inspiration for her music and lyrics.

In regards to her career with Angel Nation, as aforementioned it all started in November 2011 when she formed the band under the name EnkElination, with the band’s name being a play on words featuring “enkeli”, which is the Finnish word for “angel”, and also her own name “Elina” in the middle, changing the name to Angel Nation in 2016. Elina was initially joined by guitarist Shadow (Empyreal Destroyer, Stand Aside, Shadow Venger), playing the local London scene and developing the band as a live act while going through several lineup changes during the band’s first few years. Angel Nation also played a few important European festivals such as Bloodstock Open Air, Lankafest and The Dames of Darkness Festival, having released so far in their career the three-track, download-only EP titled Never Ending in 2012, and the albums Tears of Lust, in 2014, and Aeon, in 2017, as well as a couple of singles. Currently comprised of Elina on vocals and keyboards, Sonny Antoniou on the guitar, Julia B Cadau on bass, and Lucas Williamson on drums, Angel Nation play classic, straightforward Symphonic Metal, and you can enjoy their stylish music on their official YouTube channel, having the pleasure of listening to Elina’s powerful vocals in songs like Last Time Together (also available as an acoustic live version), Do It Anyway, and Tears Of Lust, as well as other live videos and special announcements.

During one of the concerts where Angel Nation worked as a supporting act, Elina came up to the attention of Leaves’ Eyes, being invited in 2016 to join the band to replace their departing singer Liv Kristine. And she started touring and recording with Leaves’ Eyes immediately after joining the band, including a tour with Leaves’ Eyes alongside Sabaton in the United States in 2016 (while at the same time still managing and fronting Angel Nation), and some very unique concerts like the one in Indonesia where she sang in front of 21,000 people despite the heavy tropical storm that hit the venue before the gig, and a small but fully packed venue in Belgium that she considers one of the hottest shows she’s ever done, feeling like a sauna on stage. Since Elina became the new frontwoman for Leaves’ Eyes, the band has already released a handful of singles; an EP titled Fires in the North, in 2016, which includes an original song (also presented in acoustic format) and three re-recorded songs from the band’s 2015 album King Of Kings; and now in 2018 their first full-length album with Elina on vocals, entitled Sign of the Dragonhead. You can have a very good time together with Elina and Leaves’ Eyes by listening to excellent songs such as Edge of Steel, Across The Sea,  Fires in the North, Jomsborg, and Sign Of The Dragonhead. When asked about her favorite songs by Leaves’ Eyes, our dauntless Valkyrie mentioned Take the Devil in Me (from the band’s 2010 album Njord) and Sacred Vow (originally from King Of Kings, but re-recorded with Elina on vocals for their EP Fires in the North) as two songs she would definitely add to her personal playlist, while Edge Of Steel and Swords In Rock (both also from King Of Kings and re-recorded with Elina on vocals for their EP Fires in the North) might be the ones she has the most fun playing live.

As previously mentioned, our Finnish diva has also been a vocal coach and teacher since she was 19, as during her years studying classical singing there was a a large variety of subjects such as music history, music theory and also music teaching, giving classes and lessons about breathing technique, vocal exercises (vocal placement and projection), stylistic awareness, repertoire, and stage and performance technique. Elina mentioned that she really loves teaching and that it’s been a pleasure for her to have already had many different students over the years, saying it’s at the same time challenging and rewarding. Of course, having to balance between Angel Nation and Leaves’ Eyes together with her vocal coach and teaching activities is not an easy task, with very little free time left, something she has to manage by scheduling and planning well in advance. Furthermore, she mentioned in one of her interviews that whenever she has some free time, she likes seeing her friends, watching movies and relaxing, also saying she doesn’t really have any time for hobbies. And to stay in shape on and off tours, Elina said she has an active lifestyle, practicing all kinds of sports to keep her fitness up, and while she’s on tour she said that being on stage is already a good workout for her, always resulting in her losing some weight.

Lastly, when asked about her biggest idols in music, and singers she admires and that inspired her in any way, Elina said that she really likes female singers such as Dutch goddess Sharon den Adel (from Within Temptation) and Whitney Houston, as she enjoys all kinds of styles, while her favorite male singers are Spanish tenor, conductor and arts administrator Placido Domingo, who she used to idolize when she was a teenager, and the one and only British icon Freddie Mercury, her all-time inspiration as a singer. Anyone who admires Mr. Freddie Mercury already deserves our utmost respect, and when that person is as talented, energetic and hardworking as our unstoppable Finnish banshee Elina Siirala, things get even better and more epic.

“I think it’s amazing how much emotions music can awaken in people, how it can change your mood and bring back memories. It’s the perfect way of expressing myself as an artist and sometimes writing songs is almost like therapy that helps you through hard times. Compared to other instruments I’ve played, singing is definitely the most personal for me as I’m actually the instrument and I get to express everything through my own voice and of course lyrics.” – Elina Siirala