Regression might be a return to a former or less developed state, but the new album by this talented Indian act is undoubtedly the evolution of Thrash and Groove Metal. 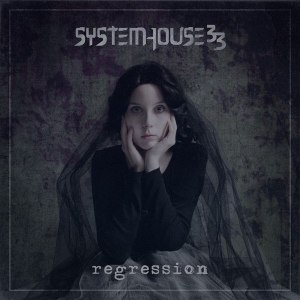 I guess the first time I realized how crazy for heavy music people in India are was when I watched Iron Maiden’s Flight 666 documentary for the first time some good years ago. Watching around 30,000 people in Mumbai, India being completely smashed and screaming like lunatics to my favorite Iron Maiden song of all time, the unique “Aces High”, showed me there’s a lot more in the Land of Prayers than that hardly watchable Bollywood shebang. And it’s exactly from the city of Mumbai that come the demented thrash metallers SystemHouse33, who are not only releasing an amazing new album entitled Regression, but are also more than ready to conquer the entire world with their high-quality metal music.

Unleashing a rip-roaring fusion of the traditional Thrash Metal by Sepultura with elements from Groove and Death Metal (and even Melodic Death Metal), and having released four albums already in their career, this talented band has been reaching many important milestones since their inception in 2003. Always against all the odds, SystemHouse33 was the first metal band to ever emerge from the small Indian town of Nagpur, quickly spreading their Heavy Metal over several rock festivals and music events around India, including Campus Rock Idols, Metal Meltdown and Wacken Metal Battle. And before the release of the new album, those Indian metallers toured with American Death Metal icons Six Feet Under around Germany and Austria in December 2015 on their annual Xmas in Hell tour, being the band’s first ever foreign tour and becoming the first Indian metal band to tour with a legendary Heavy Metal headliner.

SystemHouse33 founding member and vocalist Samron Jude elaborates on the concept behind the new album, “Regression is the paradox of progress; it is the disintegrating world we live in. We are doing more, but feeling worse.” And let me tell you there couldn’t be better words to describe the aggressiveness and the feeling of insurgency found in every single song of the album, because right after the ominous intro Catharsis, which feels as if the band is rising from the ashes of a fallen world, we have the title-track Regression, starting their Indian onslaught the best way possible. Featuring huge doses of savagery amidst a polished and groovy rhythm, this amazing tune showcases guitarist/drummer Atish Thomas providing his “business card” in the form of some serious riffage, and you can easily sense how much he loves Groove Metal by his drumming style. 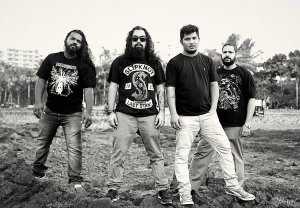 Indian brawler Samron Jude’s insane growls lead the powerful tune Lift This Plague, a solid composition perfect for banging your head nonstop where all band members are on fire, with highlights to its acid lyrics (“Pretentious flowing blood / Ignorance reaps resentment / Downward spiraling sky / Slumber of the sluggard”). Following that massacre we have the even better Namesake, one of the best tunes of the album (if not the sickest one), emanating endless electricity from all instruments. How not to get thrilled by those riffs and beats? Besides, it reminds me of the latest installments by many excellent Eastern European Groove Metal bands such as Ektomorf and Omega Diatribe. And a song named Death Chamber couldn’t sound any less visceral and obscure in a flawless display of what can be called Progressive Groove Metal, from its headbanging riffs to more progressive passages.

There’s not a single second to rest with the rhythmic and violent Detestable Idolatry, where you can feel the metallic bass chords by Leon Quadros striking you mercilessly while its contentious lyrics add a welcome touch of rebelliousness to its sonority (“Blood-filled ignorance in your soul / Self-righteous sacrifice of innocence / Slaying the name of a higher power / Shameful indulgence”). Pagan Breed is another progressive and experimental tune that never “forgets” the band’s core violence, with Samron firing anger through his harsh growls and the rest of the band doing a superb job in maintaining the ferocity of the song at a high level. Lastly, closing the album we have another berserk chant named Malicious Mind, yet again offering a potent fusion of progressiveness and old school Thrash and Death Metal. It sounds like if the band is demanding the listener to jump up and down with them, with Atish and Leon being in perfect sync with their guitar and bass lines, respectively.

I was about to give Regression a 3.5, but it honestly deserves a 4.0 for the band’s tenacity and passion for Heavy Metal in a country where almost everything seems to go against that type of music. And if you share the same passion for heavy music as the high-skilled metallers from SystemHouse33, go visit their Facebook page, YouTube channel and SoundCloud page, and grab your copy of Regression at their BandCamp page, at their official website, on iTunes, on CD Baby and many other locations. Although the word “regression” means a return to a former or less developed state, SystemHouse33 are making sure they change that concept to an evolved and exciting state of Thrash Metal with their flaming new album for our total delight.

Best moments of the album: Regression, Namesake and Pagan Breed.

Worst moments of the album: None. This album kicks fuckin’ ass.