A scorching extravaganza of Norwegian Black Metal that will consume your soul, thoroughly put together by a one-man army of darkness.

Norwegian Romantic Black Metal one-man army Minneriket is the work of vocalist and multi-instrumentalist Stein Akslen, who created the project back in 2014 for as much a philosophical and spiritual channeling as a musical outlet. Drawing on influences as various as punk and goth yet steeped in the intensity of the early Norwegian Black Metal scene, Minneriket, which translates as “the kingdom of memories”, is honest and real, reflecting both self and society, knocking down barriers and ignoring taboos, breathing new life into the genre in a completely uncompromising manner. After the releases of the albums Vargtimen in 2015, Stjerner, speil og svartebøker… in 2016, and more recently the Burzum tribute From the Veins of a Nearly Dead Boy in 2017 (which officially received inclusion on the Vikernes Burzum website), Minneriket returns in full force, unleashing upon humanity the project’s latest opus Anima Sola.

The title of the album, which means “lonely soul” in English, and the artwork, designed by Czech artist Anna Marine, are based on the catholic imagery of the lonely spirit burning in purgatory. The soul which is burning forever, but is never entirely consumed by the flames. It’s the war between spirits and matter, and fire as both a destructive force of nature and the kindle in your heart. Musically speaking, Anima Sola is a scorching extravaganza of Norwegian Black Metal that will consume your soul, with Stein doing a fantastic job on vocals, guitars, bass and keyboards throughout the whole album, leaving you completely disoriented after each of its ten piercing compositions is over, it doesn’t matter if sung in English or in his mother tongue Norwegian.

Tro, håp og kjærlighet (Norwegian for “faith, hope and love”) brings a somber, melancholic intro that keeps growing darker and darker, until Stein arises from the crypts of hades with his hellish gnarls, with his Stygian guitars generating a mesmerizing rhythm. In other words, this is Atmospheric Black Metal at its finest. And things get even better in An All Too Human Heart, featuring guest musician Fredrik Rex  (Blodsgard) on guitars and bass. Offering the listener that strident Black Metal riffage we all love so much, Stein attacks our souls with an infernal storm of old school Norwegian Black Metal, sounding absolutely bestial on vocals and, consequently, more obscure than anything or anyone you can imagine. Furthermore, it’s impressive how he masterfully blends the sheer obscurity of Black Metal with the smoothness and delicacy of ambient music, which is exactly the case in When Life Gets Sick, the Dead Grow Strong, always sounding and feeling pugnacious and chthonic, with the song’s riffs and beats being in full diabolical sync, effectively boosting its overall impact. 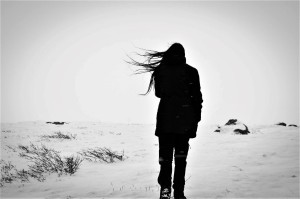 Then disturbing sounds permeate the air in I am the Serpent Son, a song tailored for lovers of the darkest form of Norwegian Extreme Metal where Stein uses his voice in an otherworldly way to distill its stylish lyrics (“I submit to your beauty and wisdom / I will learn all your black arts / Mother Lilith! / See to all my needs / so that I may grow and conquer this world”). And there’s not a single second of peace or hope in over seven minutes of extreme music in Between Infinity and Melancholy, where Stein keeps firing his blistering guitar lines and enraged vociferations, with the musicality feeling extremely raw and primeval, but still very polished due to the above average production of the album. Then in Det lyset jeg ikke kan se (or “the light I cannot see”), also featuring Fredrik Rex, we face over 13 minutes of a descent into the pits of hell full where thunderous bass punches and steady beats steal the spotlight for the first three minutes, before a sonic onrush of traditional Black Metal lacerates our minds mercilessly. In addition, Stein and his Minneriket don’t let our souls rest not even during the atmospheric break in this full-bodied blackened aria, proving how precise he is with his instruments.

Stein then treats us with a wicked beginning and his disturbing, Satanic vocal lines in Sorger er tyngst i solskinn (“sorrow is the heaviest in sunshine”), all effectively supported by the song’s somber instrumental pieces, feeling extremely metallic, inhuman and bizarre from start to finish; while Alle hjerter banker ei (or “all hearts beat one” in English) leans towards vile Blackened Doom, where once again Stein delivers hypnotizing riffs and beats that will drag your soul to the underworld, with endless grief and despair flowing from all instruments. And his most damned and depressive side keeps dominating his mind in the desperate hymn Smerte, skjønnhet og Satan (“pain, beauty and Satan”), being slow and steady as good Doom Metal should be without forgetting the project’s old school Black Metal core, before a sonic havoc of putrid sounds entitled Time for Suicide comes crushing our hearts, with its lyrics being as perturbing as they can be, especially through Stein’s evil gnarls (“Headaches taunt me with flashbacks of the past / Call it fear, but I think it runs deeper / an infection that eats away at my soul / furthering my suffering and doubling my agony”).

In summary, Anima Sola, which can be enjoyed in its entirety on Spotify, might be considered by many Minneriket’s strongest work to date, proving how focused, professional and passionate about extreme music Mr. Akslen is, always moving forward and never sounding outdated or bland. You should definitely check his other albums, news and future plans on Facebook and on YouTube, and grab your copy of Anima Sola through the project’s own BandCamp page, on iTunes or on Amazon. Stein himself commented that the album was created because “we need to talk about the darkness”, also saying that the album “speaks of solitude and ineptitude, loss and yearning; humorless Black Metal with music and lyrics equally painful and raw.” Well, let’s face it, the man behind Minneriket more than succeeded in sending his dark message to the world with Anima Sola.

Best moments of the album: An All Too Human Heart, I am the Serpent Son and Det lyset jeg ikke kan se.