Get ready for over one hour of top-of-the-line Symphonic Power Metal, courtesy of one of the most prominent and skillful bands from the Italian scene. 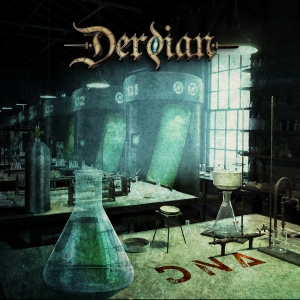 Hailing from the always fun and vibrant Italian city of Milan, a global capital of fashion and design, here comes one of the most important and most consistent metal acts from the European scene, Symphonic Power Metal squad Derdian, back with another vibrant and well-balanced album titled DNA, the seventh full-length release in their beyond prolific and interesting career. In an era where most renowned bands tend to release only a handful of songs per album, Derdian go against the tide by offering fans of their fusion of symphonic elements and Heavy Metal nothing more, nothing less than over one hour of first-class music split into 13 original songs, proving once again how much they love what they do.

Comprised of Ivan Giannini on vocals, Enrico Pistolese and Dario Radaelli on the guitars, Marco Banfi on bass, Marco Garau on keyboards and Salvatore Giordano on drums, which is the same extremely talented and focused lineup from their previous releases such as their 2014 album Human Reset and their 2016 release Revolution Era, Derdian keep blasting their usual sonic extravaganza full of symphonic layers, epic passages and endless electricity in DNA, all embraced by a crystal clear overall production that enhances the impact of their music even more, turning the experience of listening to DNA a musical orgasm for admirers of the genre.

Abduction, a symphonic-cinematic intro that sounds and feels very serene, sets the stage for Derdian to kick some serious ass with the title-track DNA, a fast and very melodic Power Metal feast inspired by the golden days of Sonata Arctica and Stratovarius, with Ivan showcasing a superb performance on vocals while Marco Garau and Salvatore have a healthy “duel” of delicacy versus stamina with their instruments. After such powerful start the band offers a top-notch Melodic Metal tune for the masses titled False Flag Operation, with its conspiracy theories-inspired lyrics (“It flies along the blue skies / No one knows what’s gonna happen / New York city will have / The right punishment to be / A nest of worms without a faith / Greedy hawks vultures and jackals / Soon the west will got a / Nice surprise to share with me!”) and sheer epicness flowing from the guitars by Enrico and Dario, followed by Never Born, where a smooth start evolves to a feast of harmonious and delicate sounds, but still bringing the traditional electricity of Melodic Power Metal. In addition, this is a great song to sing along with Ivan and the guys, with Enrico, Dario and Marco Banfi giving a lesson in intricacy, melody and feeling with their stringed weapons.

The next track in DNA, called Hail to the Masters, presents a fun fusion of Symphonic Power Metal with Epic and Folk Metal, considerably different from their traditional sonority, with Ivan singing like a true minstrel and with Marco Garau dictating the rhythm with his whimsical keys; while in Red and White, a perfect example of what Melodic Metal is all about, the band gets back to their old school musicality, which means fast and melodic riffs, nonstop drums and another great vocal exhibit by Ivan, flowing smoothly form start to finish. Then we’re treated to a prancing mid-tempo composition entitled Elohim, led by the rhythmic beats by Salvatore and feeling almost a hundred percent Folk Metal at times, before morphing into a Jazz-infused feast of bass punches, keyboard solos and an upbeat vibe. It’s indeed a fantastic and unique side of Derdian, but if that is not entertaining enough for you, we have another powerful tune named Nothing Will Remain for your avid ears, blending elements from classic and symphonic music with modern Progressive Metal, with highlights to the spot-on guitar solos by both Enrico and Dario.

While Fire from the Dust brings what’s perhaps their most aggressive lyrics (“Like a snake crawls out from the rocks / We go out from …this fucking hole / Let the hate becomes a fire / Fire from the dust! / Take the weapons, annihilate them / They are not machines! / Like a snake crawls out from the rocks  / Fire from the dust!”), musically speaking it’s a Symphonic Metal extravaganza tailored for diehard fans of the genre, with the solos by the band’s guitar duo and especially by Marco Garau adding even more electricity to the overall result. Then in Destiny Never Awaits a gentle piano intro evolves into a decent power ballad by this Italian six-piece squad, presenting pleasant guitar lines and potent vocals, but unfortunately never reaching the same electrifying vibe of the rest of the album; whereas in Frame of the End the band delivers a heavier version of their Symphonic Power Metal (it can even be considered a more symphonic and metallic version of the music by Dream Theater in my opinion) spearheaded by Ivan and his passionate and flammable vocal lines, with Stefano also having a precise and groovy performance on drums, not to mention all of the song’s nice breaks and variations. Marco Garau once again kicks things off in a vibrant feast of Melodic Metal titled Part of This World, where not only Enrico and Dario are in total sync with their riffs, but you should also pay attention to how they meticulously add several elements from classical music to their Power Metal. And lastly, as a “bonus” the band offers us a Spanish version for “Nothing Will Remain”, translated to Ya Nada Cambiara, bringing an extra dosage of epicness and an fresh kick to their Symphonic Power Metal.

If you’re not familiar yet with the symphonic and electrifying world of Derdian, you can get more details about the band, their tour dates and their music on Facebook and on YouTube, and purchase a copy of DNA directly from their webstore, from iTunes or from Amazon. In a nutshell, DNA is more than just another ass-kicking, thrilling album by this Italian squad that lives and breathes Melodic and Symphonic Power Metal, but a beyond recommended option for anyone who admires some good old Heavy Metal with a precise amount of symphonic elements and an epic aura. Some bands are comprised of talented musicians while others work their asses off to provide good music to the listener, but in the case of Derdian we can say they combine the best of both worlds, with DNA being the perfect depiction of the beautiful thing that happens when you put undisputed talent together with endless amounts of hard work.

Best moments of the album: DNA, Never Born, Elohim and Frame of the End.