A fast, melodic and intricate album that perfectly represents the new age of Progressive Power Metal, telling stories in musical literature and speaking to a generation influenced by epic fantasy tales, comic books and video games. 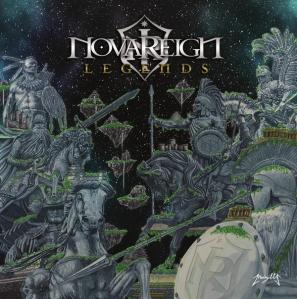 Influenced by bands like Iron Maiden and Dream Theater, to Dragonforce and Angra, American metallers  NovaReign represent the new age of Progressive Power Metal, telling stories in musical literature and speaking to a generation influenced by epic fantasy tales, comic books and video games. Formed in 2010 in the city of Los Angeles, California, in the United States, NovaReign are not only inspired by the aforementioned classic metal acts, but they also incorporate elements from a multitude of non-metal styles such as Jazz, Funk and EDM (Electronic Dance Music) to their high-octane music, adding a little extra flavor to their already exciting compositions.

The band has been steadily and surely building a buzz and reputation for themselves in recent years, becoming a fixture with energy-abounding live shows filled with nonstop shredding guitar interplay and powerful traditional metal vocals, altogether culminating in the release of their debut full-length album this year, the nonstop metal attack titled Legends, an hour-plus of shred-tastic, over-the-top, epic power and progressive metal music. Not only that, the album art also transpires epicness, as explained by guitarist Danny Nobel. “The art was based off an idea I had pitched to have giant statues of god-like figures in an astral plain,” explains Danny. “Our bassist, Moises, took the idea and created the drawings you’ve seen so far. The characters are all based on warriors and mythical beings, which represent themes of courage, heroism, strength and virtue. These are characteristics and themes of the overall album. That along with a cosmic decor.”

The following song in Legends, the excellent Heavy Heart, reminds me of the sound by some of the best metal bands from Japan such as Moi Dix Mois, Versailles, Anthem and especially Saber Tiger and Loudness, being fast, intricate, electrifying and an absolute orgasm for fans of the genre. And have I mentioned their guitar solos are simply fantastic? Anyway, moving on with their sonic onrush, Skyline feels a lot less intense than its predecessors, but still presenting the band’s characteristic sonority. All band members are precise with their instruments, providing David all he needs to powerfully declaim the song’s lyrics, with the only issue being that the song goes on for too long with its almost 9 minutes of music.

The sound of rain and an acoustic guitar set the tone in the bridge To Wander The Stars, before NovaRegin return with another metallic, melodic and inspiring tune entitled The Builder. Led by the rhythmic drums by Paul, the song presents the band’s guitar duo simply slashing their strings mercilessly, therefore generating a piercing but very enjoyable sound in the end. In Black As The Dead Of Night we’re treated to a 9-minute onslaught of Power Metal with Danny and Belmore being two shredding and soloing machines, with the work done by Paul on drums being outstanding. Moreover, despite being as long as “Skyline”, it has a lot more flavor and punch, maintaining the energy flowing until the end. And lastly, the title-track Legends brings tons of progressiveness through the band’s intricate riffs and beats, as well as the awesome bass punches by Moises. Put differently, it’s a heavier and more melodic version of Dream Theater with hints of Iron Maiden, which means that if you’re a musician and into Power Metal, this song has everything you crave in heavy music.

In case you think my words are not detailed enough to describe the music by NovaReign, you can enjoy the band doing a really nice track by track breakdown on YouTube, and after enjoying such interesting video you should definitely go check what NovaReign are up to on Facebook, and purchase Legends through their official BandCamp page, through the M-Theory Audio webshop, on iTunes, on Amazon, and in other retailers like Target, Adipocere Records and DeepDiscount. And there you have the perfect (and very intricate and melodic) soundtrack for your most epic adventures, how about that?

Best moments of the album: Call On The Storm, Beyond The Cold, Heavy Heart and Black As The Dead Of Night.

Worst moments of the album: Skyline.