One of the biggest exponents of modern-day Czech metal returns with the next chapter in their always-evolving and exciting career. 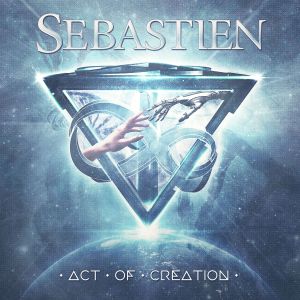 One of the biggest exponents of modern-day Czech metal is back with a brand new album that will certainly please and entertain all fans of the most electrified form of Melodic Power Metal you can think of. After the releases of their debut album Tears Of White Roses, in 2010, and the critically acclaimed Dark Chambers Of Déjà-Vu, in 2015, it’s time for Brno-based metallers Sebastien to unleash their third full-length installment, titled Act Of Creation, continuing their evolution as a band and, as a consequence, cementing their name as the finest metal act you can find in the entire land of beer.

With its cover artwork designed by Hans Trasid (Dis-Art Design), and featuring an entourage of very special guests the likes of Swedish vocalist Apollo Papathanasio (Spiritual Beggars, Firewind) and Slovak vocalist Mayo Petranin (Signum Regis), Act Of Creation will bring to your avid ears fourteen exceptional compositions by skillful musicians who are at their prime, from passionate power ballads to those fast and crisp Melodic Metal anthems that will accelerate your heartbeat in an exciting and fun way. Furthermore, it’s very important to emphasize the fact that Sebastien maintained the same lineup from their previous album, which obviously translated into pure cohesiveness, precise timing and a powerful dynamism among all band members.

The title-track Act of Creation kicks off Sebastien’s metallic feast with a heavier-than-usual sonority, bringing elements from modern-day Groove Metal to their traditional Power Metal. Moreover, frontman George Rain has (as expected) an amazing performance showcasing a wide range of vocal styles in the same song, while Pavel Dvorak brings epicness to the overall sound with his keys. Then we have No Destination, a fast-paced, aggressive tune that will please even non-metal fans due to its thrilling rhythm, presenting the always flammable vocals by George supported by Czech guest vocalist Kristýna Dostálová and endless energy flowing from all instruments; and Wake Up, an imposing tune where Lucas R. leads the crew with his pounding drums, with all orchestral and choir-like elements in the background enhancing the song’s already potent vibe. But it obviously wouldn’t be a Sebastien album without a classic power ballad like Amy, displaying spot-on riffs by George and his bandmate Andy Mons while bassist Petri Kallio not only delivers some powerful bass punches, but his 80’s Hard Rock-inspired backing vocals also add a lot of feeling to the final result. 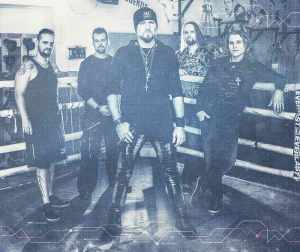 Venturing through the realms of Symphonic and Melodic Metal, the band delivers a futuristic metal chant titled Evermore, presenting a pleasant paradox between clean and harsh vocals, not to mention how determined Pavel is to arouse our senses with his fiery keyboards. My Empire reminds me of some of the latest creations by Sonata Arctica (which unfortunately is not a good thing these days), with an interesting work done with all background elements but nothing that truly connects in the end, whereas Queen from the Stars is a melancholic, serene ballad with passionate performances by George on vocals and Andy with his acoustic and electric guitars. Put differently, simply hold your lighter high and wave it together with Sebastien to this beautiful song. And featuring guest vocalist Mayo Petranin, Winner is a song where the sound of keyboards is considerably higher than the one of the guitars, therefore uniting in a pleasant way the classic sounding of the 80’s with Sebastien’s contemporary metal.

With Czech guest guitarist Djordje Erič (Citron) slashing us all with a gripping, flammable guitar solo, Heal My Soul goes back to a more traditional musicality, albeit still presenting hints of heavy music from the 80’s, and consequently pleasing both fans of the classic metal by Sebastien as well as the ones who prefer more modern Melodic Metal. In Promises, Kristýna Dostálová returns with her charming vocals in another symphonic ballad by Sebastien, with Andi and Pavel being in total sync with their respective riffs and keys, therefore boosting the electricity of the whole song; and featuring guest Apollo Papathanasio on vocals, it’s time for our Czech squad to put the pedal to the metal in the electrifying hymn Die in Me, where the whole band fires pure Melodic Power Metal for our total delight. Displaying a beyond catchy chorus and endless adrenaline, this metal hymn should sound absolutely fantastic during their live performances.

And Act Of Creation might be considered a long album with its over 60 minutes of music, but every song has its purpose just like Full Moon Child, portraying a classic name for a straightforward and very cohesive Power Metal sonority boosted by the precise beats by Lucas, with highlights to the spot-on riffs and solos extracted by Andy from his unstoppable guitar. The second to last metallic act by those Czech rockers comes in the form of a semi-acoustic ballad entitled Hero, with another powerful performance by George on vocals, before the bonus track V Síti Štěstí (or “in the network of happiness” from Czech) closes the album in sublime fashion. It’s not a secret to anyone that Sebastien never get tired of delivering soulful ballads to our ears; however, this is a fresh one, being fully sung in Czech, which seems to have provided George some additional room for adding never-before-seen nuances to his vocal lines.

It’s always a pleasure to see a talented and hardworking band like Sebastien evolving in their already solid career, and if you want to know more about the best metal band hailing from the enchanting Czech Republic you should definitely go check their Facebook page and YouTube channel for news, tour dates (and they do tour several other countries if you ) and, of course, more of their awesome Power Metal. Act Of Creation, which can be purchased from the Pride & Joy Music webstore, from the band’s own Facebook, from iTunes or from Amazon, is one of those albums that will put a smile on your face no matter how hard your day has been, proving once again Sebastien are here to stay and to keep bringing top-tier heavy music to our never-resting metal hearts.

Best moments of the album: No Destination, Evermore, Promises and Die in Me.

Worst moments of the album: My Empire.

Are you ready to enter the dark chambers of complexity, professionalism and passion for Heavy Metal brought forth by this fine Czech band? 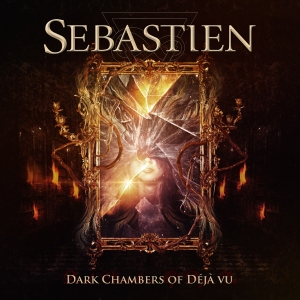 When I saw my metal heroes Iron Maiden kicking ass last year in the pleasant city of Brno, located in the always amazing Czech Republic, I knew there was something special about that place, some sort of Heavy Metal aura surrounding its antique constructions and exquisite landscapes. Almost one year later, with the release of Dark Chambers Of Déjà-Vu, the brand new album by Melodic Power Metal band Sebastien, I can definitely feel that metallic energy flowing from that historical Moravian city.

Formed in 2008, and after releasing their debut album Tears Of White Roses in 2010 and touring the Czech Republic, Slovakia and Austria, among other European countries, together with bands such as Fates Warning, Masterplan and Circle II Circle in the next couple of years, it was time for the band to return to Grapow Studios in Slovakia to record Dark Chambers Of Déjà-Vu. And just like its predecessor, the new album includes some very special guest performances by Tony Martin (Black Sabbath), Sergey Baidikov (Inner Fear), Zak Stevens (Circle II Circle, Savatage), Roland Grapow (Masterplan), Ailyn Giménez (Sirenia) and Marlin Rya Poemy. Add to that considerable dosages of progressiveness, symphonic elements and riveting storylines, and the final result couldn’t sound more entertaining.

Fans of Power Metal and Symphonic Metal will get instantly hooked to the opening track Stranger at The Door, which relies heavily on that famous “heavy riffs and vocals with an atmospheric background provided by keyboards” formula without sounding cheesy. Moreover, the excellent vocals by George Rain remind me a lot of Tony Kakko from Sonata Arctica, with the growls by guest vocalist Sergey Baidikov (Inner Fear) adding a lot of electricity to the song. Highland Romance, one of the few songs with no special guests, keeps the ball rolling with its old school Sonata Arctica vibe. It’s very cohesive and rhythmic, with a “medieval” touch thanks to the excellent work done by keyboardist Pavel “Dvorkys” Dvorak, followed by the semi-ballad inspired by the gripping Hard Rock from the 80’s entitled Crucifixion Of The Heart, where not only guitars and keyboards are in perfect sync, but its traditional lyrics about love also match perfectly with what the music is proposing.

Following a similar pattern of the previous track, Lamb Of God showcases a passionate performance by George, supported by the precise guest vocals by Tony Martin (Black Sabbath) and a beautiful solo by guitarist Andy Mons, while the symphonic and progressive The Walls Of Lyman-Alpha feels like a blend of Nightwish and Dream Theater, with highlights to the heaviness of its riffs and keyboards which end up making the whole song more enjoyable. And Sphinx In Acheron gets even more symphonic, with the strong ambience crafted by the band enhancing the beautiful vocal duo by Goerge and guest female vocalist Marlin Rya Poemy. 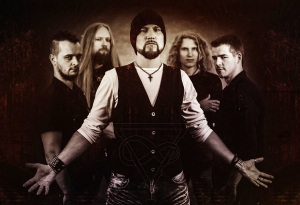 When Frozen Nightingales starts it feels like a heavier version of Van Halen during the Sammy Hagar-era, with its catchy chorus, high-speed rhythm and thrilling symphony turning it into one of the best songs of the album; followed by Sleep In The Glass, where we must give kudos to drummer Lucas R. for being spot on with his solid technique; and the excellent metal ballad The Ocean, with guest singer Zak Stevens delivering a powerful performance together with  George, supported by the heavy artillery of Lucas and bassist Petri Kallio. Man In The Maze, the second song to feature guest singer Sergey Baidikov, is another melodic and straightforward Power Metal tune that will please all fans of the genre, and in case you’re not that much into harsh vocals this is an awesome option to start enjoying the “dark side of singing”.

Speeding up and getting heavier than before (mainly due to drummer Lucas being more “enraged” behind his drum kit), the last part of the album begins with The House Of Medusa, a high-end traditional tune containing all the elements necessary for a great metal song, before My Deepest Winter shows what happens to a song when you have Mr. Roland Grapow on the guitar. It’s slightly darker than most of the other songs, and in my humble opinion it could have even been a little longer to enhance its epicness. Then we have the celestial voice from Spanish diva Ailyn Giménez embellishing the smooth ballad Last Dance At Rosslyn Chapel, and let me tell you that her performance will undoubtedly touch your heart. In addition, it’s amazing how George and Ailyn turn their “dialogue” into sublime poetry, but obviously the song wouldn’t have been so intense without the atmosphere provided by the rest of the band. And last but not least, as I love live songs all I can say is that the two bonus tracks (Dorian and Headless Cross) are outstanding and add so much value to the album it makes me wonder if their next release should in fact be a live album (check the official video below and you’ll see what I’m talking about).

Sebastien can be reached through their Facebook page, YouTube channel and SoundCloud, and if you want to purchase Dark Chambers Of Déjà-Vu you can find it on Amazon or iTunes, among other locations. In other words, are you ready to enter the dark chambers of complexity, professionalism and passion for Heavy Metal brought forth by this fine Czech band?

Best moments of the album: Frozen Nightingales, The House Of Medusa and Last Dance At Rosslyn Chapel.