When you have two of the best and most iconic Thrash Metal bands of all time playing together in the city, you know exactly where you have to be. 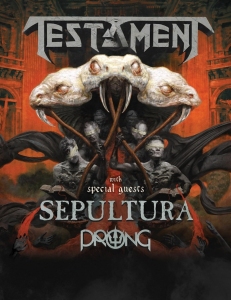 As much as I enjoy the Phoenix Concert Theatre and obviously the bands that were going to play last night, I truly and deeply hate the weekdays rush hour traffic to get from my town, the suburban Oakville, to Toronto whenever there’s a good metal concert I want to attend. At least the weather was fantastic (even with a short storm that happened at around 7pm), with the temperature being above 20 degrees, which means no one had to carry their burdensome jackets like what always happens when a concert is in the middle of the winter.

Anyway, due to traffic (and because I had to eat something before heading to the venue), I completely missed the performance by American Crossover Thrash power trio PRONG. I have absolutely no idea if it was a good concert or not. Well, probably yes as the group spearheaded by Tommy Victor has all it takes to deliver great music to the audience, but unfortunately I can’t say a word about what they did last night, not even write down their setlist.

Fortunately, I got to the Phoenix Concert Theatre just in time to see the always amazing show by Brazilian Thrash/Groove Metal masters SEPULTURA, who are currently promoting their latest album, the very experimental and exciting Machine Messiah.  Derrick Green, Andreas Kisser, Paulo Jr. and Eloy Casagrande put on an electrified performance on stage from start to finish, blending several songs of their new album like the excellent Phantom Self and Sworn Oath with all-time classics such as Desperate Cry, Inner Self (my favorite of the night) and Refuse/Resist, and of course the song most fans at the venue wanted to hear, their ritualistic hymn Roots Bloody Roots. The sound was very clear, cohesive and powerful, just like what the band offers us in their studio albums, proving Sepultura are a band that always provides their fans the same high level of quality found in their studio versions when they transport those compositions to the stage. As usual, the highlights of their performance were the insane riffs, solos and other awesome tricks done by Andreas with his guitar. That guy is one of the most gifted guitarists in the history of heavy music, which means if you’ve never seen him playing live, don’t miss that chance the next time “Sepultura do Brasil” visit your city.

After a short bathroom and beer break, it was time for American Thrash Metal behemoths TESTAMENT to create a sonic Armageddon in Toronto with their unparalleled aggression and refined technique. I guess I always say the same thing about Testament, but all band members are extremely talented and way above average, in special the guitar virtuoso Alex Skolnick and the human earthquake Gene Hoglan. Those two are not simple musicians, they’re demonic beasts when armed with their instruments, delivering the best of the best when it comes to heavy music.

Blasting some of their newest creations from the best metal album of 2016, the superb Brotherhood Of The Snake, especially the kick-ass tunes Brotherhood of the Snake, The Pale King and Stronghold, with old school songs and newer classics, they delivered a flawless performance for the delight of all metalheads at the venue. A few songs from their setlist deserve some special attention, like the brutal and sensational Rise Up for its enhanced mighty power when played live, the high-octane Centuries of Suffering for the insanely intricate magic Gene does behind his drums, and Electric Crown for the amount of groove and feeling flowing from the band’s instruments.

My only complaint about the concert was the excessive amount of solos, one for each band member. As much as I love each guy from the band, I personally prefer regular songs than solos. If they replaced those solos with newer songs like “The Number Game” or “Native Blood”, or with classic like “D.N.R. (Do Not Resuscitate)” or “Burnt Offerings”, it would have been just perfect, but that’s just my opinion. The whole concert was fuckin’ awesome anyway; not even all those solos were able to cool down the audience, mainly because whenever there was a solo there was also a demolishing classic right after it, like when they played the circle pit-generator First Strike Is Deadly after Gene’s drum solo.

Before playing the encore, the iconic Chuck Billy, who by the way is singing better and better as time goes by, therefore being able to perfectly replicate his sensational deep growls live without making any extra effort, told the fans a story about when they were in Texas hanging out with the guys from one of the most respected, energized and violent bands of all time, the one and only Pantera, drinking Jack Daniel’s (and probably taking other stuff as well) with them. Can you imagine that? Testament and Pantera together? The 90’s were definitely the best period for Thrash Metal, no doubt about that. Chuck said that after a lot of drinking, something hit his head (maybe a bottle of Jack Daniel’s, or maybe it was the alcohol itself) and he told the other guys he had the name for their new album. It was going to be called Practice What you Preach, one of their biggest hits, and one of the best of the night as well.

There was still time for one last sick mosh pit with Over the Wall, and after all was said and done you could see how happy all fans of Testament were with their amazing performance. As Chuck said, I hope all promoters in Canada turn their eyes to Testament more often aiming at having more concerts all over the country, not only two or three cities. Let’s hope that those promoters listen to the deep voice by Chuck and we have more of the brotherhood of Thrash Metal in our currently not-so-cold country, because after such brilliant performance last night I’m sure all Torontonian fans of Testament are eager for more of their music.

Encore:
Practice What You Preach
Over the Wall