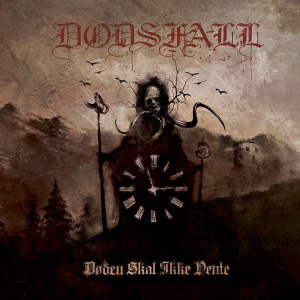 After four years of silence, the unstoppable Norwegian Black Metal force known as Dødsfall returns with their long-awaited fifth album, entitled Døden Skal Ikke Vente, or “death shall not wait” from Norwegian, containing 10 new tracks of pure hate and anger in its best form. And their new album is the result of a huge wave of inspiration that grew up like a snowball after the release of Kaosmakt, in early 2015, resulting in a fresh and creative album holding on to their roots and the sound that was established from the very beginning on the band’s career. It can be described as a successful combination of past and present with new elements and different sources of inspiration, sounding epic, majestic and furious with a medieval touch inspired from the cold lands of the north.

Formed in 2009 in Bergen, Norway, but currently located between Gothenburg, Sweden and Oslo, Norway, Dødsfall is the brainchild of vocalist and multi-instrumentalist Ishtar, who together with newcomer Telal on drums (who has been playing with acts like Troll, Isvind, and Endezzma, to name a few) created a sulfurous and dark beast in the form of their new album Døden Skal Ikke Vente. Featuring a crushing, ominous album artwork by underground artist Pazuzuh, who previously worked with the band on the artwork of their album Djevelens Evangelie, from 2013, Døden Skal Ikke Vente will take you on a journey through vast, bitterly cold Norwegian lands, proving once again why Norway is and will always be the birthplace and home of true Black Metal.

Ishatr and Telal begin disturbing all peace and order with their ruthless blend of old school and contemporary Black Metal in Hemlig Vrede (or “secret wrath” in English), sounding very melodic and aggressive form the very first second and with Ishtar’s demonic gnarls being flawlessly complemented by Telal’s brutish blast beats. Their furious and thunderous Black Metal keeps hammering our heads in Tåkefjell (“fog mountain”), another piercing composition where the guitars by Ishtar sound as metallic as they can be, also presenting lots of breaks and variations, and consequently feeling like three or four songs in one; followed by the obscure and melancholic Svarta Drömmar (“black dreams”), where their Black Metal is darkly infused with Atmospheric Black Metal elements, with its rhythm being dictated by Telal’s precise drums and with highlights to Ishtar’s anguished growls.

Putting the pedal to the metal this infernal duo delivers a vicious onrush of violent and raw sounds entitled Grå Himlar (“gray skies”), with the riffs and solos by Ishtar cutting our skin mercilessly, and therefore setting the bar high for the rest of the album. Well, the duo doesn’t disappoint at all in the following track, Kampsalmer (“battle hymns”), a headbanging, marching chant showcasing bestial riffs and demonic roars all enfolded by a truly menacing ambience, and the music remains vile and sulfurous until its epic ending. Then led by the pounding drums by Telal and displaying an inspired Ishatr on the guitar we have the full-bodied, intricate tune entitled I de Dødens Øyne  (“in the eyes of death”), a song tailored for admirers of classic Black Metal who also love to raise their horns and slam into the pit in the name of extreme music.

Continuing with their feast of incendiary and dark sounds they offer us all Ødemarkens Mørkedal (“the dark valley of the wilderness”), an ode to Scandinavian Black Metal where Ishtar growls and roars in a bestial way while Telal keeps crushing his drums nonstop, whereas the heavy-as-hell guitar lines by Ishtar ignite the flammable För Alltid I Min Sjæl (“forever in my soul”), a mid-tempo Black Metal extravaganza where Ishtar and Telal are on fire from start to finish, sounding as infernal and sharp as possible. The last song of the album, named Ondskapelse (“evil hands”), brings more of their hellish Scandinavian Black Metal infused with Melodic Black Metal nuances, with Telal smashing his drums just the way we love it in Extreme Metal, flowing like rapid fire until the instrumental outro Skogstrollet (“forest troll”) captivates our senses with the howling sound of the cold wind, ending the album on an ethereal note.

You can better explore the chilly and vile realm of Norwegian Black Metal crafted by Dødsfall by following them on Facebook, and show your support to such talented duo by purchasing Døden Skal Ikke Vente (available for a full listen on YouTube, by the way) from their own BandCamp page, as well as from the Osmose Productions’ BandCamp or webstore, and from Record Shop X. Let all the frost, hatred and evil flowing from the music found in Døden Skal Ikke Vente embrace you, leading you on a fantastic and somber one-way journey into the absolute darkness and void we learned to love in Norwegian Black Metal.