Beware as the witches are coming to take your soul with their occult, stoned-out Doom Metal.

British drummer Mark Greening (Electric Wizard, Ramesses, With The Dead) and Italian singer Virginia Monti (Psychedelic Witchcraft) have joined forces to establish the heaviest occult, psych superbeast to see the light in 2017, taking the shape of Occult Stoner/Doom Metal act Dead Witches and unleashing upon us mere mortals their debut album obscurely entitled Ouija, a must-have for followers of bands like Electric Wizard, Sleep and Pentagram, among others, who love the combination of dark and strong melodies, heavy guitar riffs and a truly supernatural vibe.

Ouija is comprised of six distinct songs that will mesmerize you during the album’s 33 minutes of somber passages, classic Doom Metal beats and a stunning performance by Virginia on vocals, all perfectly depicted by the bewitching artwork designed by Goatess Doomwych. In addition, Ouija also ended up being the last release in the career of guitarist Greg Elk, who sadly passed away late 2016, giving the album an extra mystical touch. In other words, while listening to Ouija, let the awesome sound of Greg’s guitar penetrate your mind and soul, taking you to the other side for a quick visit where he’s definitely having a good time with his deceased guitar heroes right now. I’m pretty sure that’s what Greg and the rest of the band want you to feel with their music.

The album’s two-and-a-half-minute long Intro informs a dark, misty storm is upon us, with the menacing bass by Carl Geary sending a clear message that there will be no sign of happiness from now on, beginning with the excellent Dead, where Greg and Mark generate the most damned atmosphere you can think of with their fetching guitar riffs and Doom Metal beats, respectively, before the classy Virginia begins firing her sexy devilish vocals, leading us all to burn into the fire as the music progresses. And as the icing on the cake, Greg delivers an outstanding solo to make the whole song even more captivating.

Then it’s Greg and Carl who build the wicked atmosphere in the sensational Drawing Down The Moon, my favorite song of the album where Virginia sounds even more rapturous on vocals. Moreover, when Mark speeds his beats up we’re treated to a potent sonority full of electricity, passion and the delicious obscurity of Doom Metal. The title-track Ouija is a lot more melancholic, highly recommended for savoring a full bottle of a high-quality, traditional red wine. Greg keeps blasting pure awesomeness through his riffs and solos, while at the same time we get hypnotized by the song’s vocal lines and beats inspired by ritualistic Doom Metal.

In Mind Funeral, get ready to play with the words “self”, “mind”, “control” and “funeral” together with Virginia throughout the whole song in a gripping way, while the rest of the band delivers their low-tuned, obscure lines flawlessly. Although this amazing chant might darken your heart a bit, I’m pretty sure you won’t regret feeling that darkness growing inside you thanks to the electrifying sonority brought forth by this England-based group. And A World Of Darkness, the last tune of this darkly alluring album, showcases powerful performances by Mark and Carl in over seven minutes of raw, straightforward old school Doom Metal that smoothly flow into a Stygian ending. Needless to say, the guitar sounds by Greg feel really touching the whole song, an amazing job done by a talented guitarist that will surely be missed by his family, friends and fans.

You can join the entrancing coven by this excellent UK band through their Facebook page or YouTube channel, and you’ll soon be able to buy your copy of Ouija at the Heavy Psych Sounds Records website, at the All That Is Heavy webstore, on Amazon and other locations. So beware, my dear headbanging friend, as the witches are coming to take your soul with the occult, stoned-out music found in Ouija, an album that has all it takes to become a fan-favorite among admirers of underground Doom Metal without a shadow of a doubt.

Best moments of the album: Drawing Down The Moon and Mind Funeral.

A sea of complexity and groove thoroughly presented by an auspicious French quintet that definitely knows how to craft high-quality Djent and Metalcore. 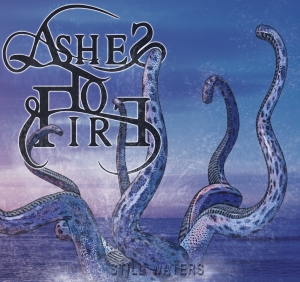 The subgenre of heavy music known as Djent, a development of progressive metal named for an onomatopoeia for the distinctive distorted, low-pitch guitar sound first employed by Swedish icons Meshuggah, with bands like After The Burial, Sikth, Animals As Leaders and Born Of Osiris becoming some of its biggest exponents, has been also represented worldwide since 2013 by a dexterous quintet hailing from the charming city of Bordeaux, France named Ashes To Fire. Fans of Metalcore, Djent, Hardcore and Post-Hardcore will have a great time listening to the music by these French metallers, in special the six potent compositions from their brand new EP entitled Still Waters.

Featuring members of local French bands such as Hate To Eleven, Defeat The Foe and Heaven Can Wait, Ashes To Fire offer the listener a very professional and punchy fusion of all their metal inspirations. The artwork in Still Waters, designed by French artist Serge Cleoron, features an ocean that represents the harmony among all band members while the octopus and its tentacles depict some of the band’s main influences in music like August Burns Red, Thy Art Is Murder and Born Of Osiris, among others, continuing the musical path initiated with their 2014 self-titled demo and their 2015 debut EP Karmalogy. It doesn’t matter if you’re a longtime fan of Djent or not, you’ll certainly sense elements from all those bands in Still Waters, and will probably start banging your head to Ashes To Fire’s powerful compositions without even noticing.

Modern sounds together with heavy guitars in the EP’s Intro kick things off in a thunderous way, before guitarists Nico and Dylan lead the Metalcore massacre Real Life, with lead singer Yas growling like there’s no tomorrow. In addition, the song gets less violent and more melodic at times, keeping the sonority always fresh in an awesome display of what this French quintet is capable of. The violence of Hardcore turns Dad And Mum into the most electrifying and complete track of the EP, where once again again Yas demonstrates all his vocal potency while Corekie and William generate a true storm of metal music with their respective rumbly, noise bass and dense beats.

Bringing elements from Melodic Death Metal the likes of In Flames mixed with the modern American Metalcore from August Burns Red, To Disappear displays a flawless sync between the heavy riffs by Nico and Dylan and the roaring bass by Corekie, whereas in Roots To Sheet, the sound of guitars grows and is complemented by bass and drums in another solid exhibition of Djent and Metalcore by this awesome band. Moreover, a constant, heavy ambience keeps the music at a truly dark level perfect for Yas to fire his distressed harsh vocals. Finally, a sinister intro ignites the last track in Still Waters, titled Sara, being sharply joined by the intricate bass wallops by Corekie, with Nico delivering his solid guitar solos in a sea of complexity and groove that goes on until the song’s abrupt and effective ending.

In summary, the excellent Still Waters, available at Ashes To Fire’s BandCamp page or at M.U.S.I.C. Records’ webstore, is definitely your go-to album for contemporary high-quality Djent and Metalcore, and if you want to explore the already mentioned groovy sea of heavy music created by those French metallers simply visit their Facebook page and YouTube channel, consequently showing your support and appreciation for a music style that keeps reinventing itself, proudly carrying the flag of modern metal music all over the world.

Best moments of the album: Dad And Mum and To Disappear.