They have a lot of thrashing songs that have abbreviated titles, and they kick some serious ass with their old school music and hardcore attitude. 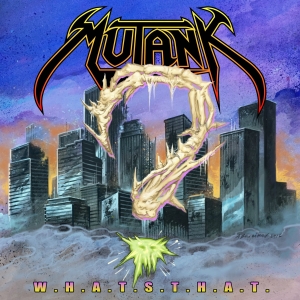 They have a lot of thrashing songs that have abbreviated titles on their menu, and all those songs will certainly put you to slam into the circle pit with their endless electricity and catchy melodies. I’m talking about Canadian Crossover/Trash Metal act Mutank, who have just released a new EP titled W.H.A.T.S.T.H.A.T. (which according to the band means “We Have Alotta Thrash Songs That Have Abbreviated Titles”). Displaying a kick-ass old school cover art by Andrei Bouzikov (Holycide, Municipal Waste, Skeletonwitch), W.H.A.T.S.T.H.A.T. is not just a set of five amazing Crossover Thrash songs, but it’s also a follow-up to the band’s 2014 debut album M.E.C.H. METAL, which carved Mutank’s name in the Montreal Thrash scene and led them to play at Wacken Open Air that same year, as well as a taste of what’s to come as the band will have a full-length album to follow the EP later this year.

Inspired by Megadeth, Overkill, Iron Maiden, Municipal Waste, Mike Patton and the golden age of Thrash Metal, this Montreal-based quartet describes their sound as a “T-Rex skateboarding down a volcano”, which is exactly what you’ll find in W.H.A.T.S.T.H.A.T. “Our upcoming EP W.H.A.T.S.T.H.A.T. sort of started as a joke. I just thought it would be funny to force an acronym for ‘what’s that?’ and I came up with ‘We Have Alottta Thrash Songs That Have Abbreviate Titles’. From there we came up with the concept of an EP with a bunch of forced acronym titles. The EP itself was written somewhat conceptually with the individual songs being very short thrash songs that come together to make one longer progressive thrash track, which harkens back to the title since we don’t even know what it is! We have a ton of new material in the works as well, people can expect new stuff sooner rather than later!”

In the opening track, titled  L.I.F.E. (“Lament Infinity, Forlorn Eternity”), we’re treated to the sharp, thrilling guitar riffs and solos by Costa Skoulikas and Lee Whiskey in one minute of old school Thrash Metal, warming up the listener for I.D.I.O.T. (“I’ll Do It Over Tomorrow”), with its sick lyrics being nicely declaimed by lead singer and bassist Stephen Reynolds (“My brain’s a backed-up toilet / Can’t function cuz’ somebody soiled it / The posterior of prosperity / Thoughts too inbred to decongest / They’re unrelated so it can’t be incest / As I plunge into depravity”), whose rumbling bass also adds an extra kick to the song. Slam into the pit, have a beer with your buddies or simply bang your head nonstop to this uncompromised and electrified tune, before Mutank brings forth more shredding and thunderous bass lines for our avid ears in the faster and more hardcore mosh pit-generator P.O.P.U.L.O.U.S. (“Price Of Progress: Ugly Little Organisms Undermining Society”). This awesome composition sounds like the Thrash Metal played by Anthrax with Mutank’s own touch, turning it into the best track of the EP in my opinion.

F.O.G. (“Frailty Of Genius”) can be summarized as a minute and a half of pure madness led by the groovy beast by drummer Ahmed Daas and the inebriate vocals by Stephen, who once again sings the song’s old school demented lyrics with all his strength (“I walk around saying “It’s too late” / I know it ain’t / I guess that’s why I hold my breath under the water / ’til I come back up and drown in air”). And D.E.A.T.H. (“Divine Evaluation Awaits Thee Human”), the longest of all tracks, is also the one with the highest amount of complexity, showcasing thrashing guitars and a badass attitude, with Stephen and Ahmed sounding simply bestial with their bass and drums, respectively.

In ten minutes, Mutank slam more than several bands in their entire careers, and that says a lot about the overall quality of the music found in W.H.A.T.S.T.H.A.T. You can get to know more about Mutank and their wicked acronyms and abbreviations at their Facebook page, listen to their high-voltage music on YouTube and on SoundCloud, and purchase W.H.A.T.S.T.H.A.T. through their BandCamp page. I was trying to come up with a fun abbreviation to conclude this review, but you know what? Leave those to Mutank, as they definitely know how to condense words and, more important than that, amazing music into their short but extremely fun compositions.