A metallic warrior hailing from Spain is on the loose, ready to take the world of heavy music by storm with their debut album.

Spanish Heavy Metal band Evil Hunter, a newborn combo formed in 2017 by experienced musicians coming from renowned bands from the underground Spanish scene like WarCry, Lords of Black, Chicanos, Nova Era, Nightfear and Alien Rockin’ Explosion, among others, is more than ready to take the world by storm with their self-titled debut opus Evil Hunter, a stunning album of old school Heavy Metal spiced up by hints of Power Metal and Hard Rock, showcasing powerful vocal arrangements, an awesome guitar work and a catchy rhythm basis. In other words, not only Evil Hunter is going to be a total delight for any admirer of the genre, but it will also accredit the band to be one of the main flag bearers of Spanish metal in the coming years.

Vocalist Damián Chicano (Chicanos), guitarists José Rubio (WarCry, Nova Era) and Victor Durán (Lords of Black, Nightfear), bassist Alberto Garrido (Alien Rockin’ Explosion, Black Hat) and drummer Gustavo Segura (Nova Era, Vargas Blues Band) had been dreaming of forming a new band together for a while before forming Evil Hunter, all sharing the same passion for classic heavy music, and the top-tier quality of the music found throughout the entire album proves their efforts to concretize that dream were not in vain. Featuring a straightforward artwork by Bernat Masías (Brnix Art), where the listener has the pleasure to meet the metallic warrior that carries the name of the band (or maybe it should be the other way around, who knows), Evil Hunter will fill your ears with the purest form of metal music from start to finish, and I’m sure after the last track of the album ends you’ll go back to the start to listen to everything over and over again.

In the opening track, titled Surf the Waves, the band already fires frantic, electrifying metal music for our avid ears, with José and Victor together with Gustavo setting the stage for the Accept-inspired, flammable vocals by Damián. Put differently, this is 80’s classic Heavy Metal with no shenanigans nor any artificial elements, which can also be said about the headbanging tune Evil Hunter, where we’re all urged to raise our horns and bang our heads to a crushing fusion of Heavy Metal and Hard Rock by the quintet. Feeling like it was taken directly from the 80’s, the song showcases another precise performance by Gustavo on drums while the guitars keep spreading electricity and magic. Then leaning towards a galloping Iron Maiden/Helloween-like sonority, Evil Hunter keep mesmerizing us with their incendiary waves in Heartbeat, with Damián once again having a beyond awesome vocal performance, powerfully supported by the song’s effective backing vocals; followed by Hot Leather, a smooth and sexy rockin’ feast by Evil Hunter bringing lyrics à la AC/DC blended with Steel Panther (“I wanna feel you around / You shook me / You rode me like a horse / You made it slow and nice / Now tell me what you want / So nice / I’ll give you what you want”), therefore perfect for singing along with the band while Gustavo keeps kicking ass with his rhythmic beats. 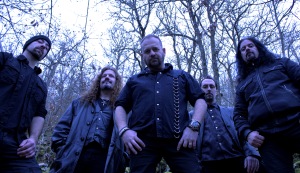 In Hold Me Tight, the stringed trio José, Victor and Alberto fire spot-on melodious lines for Damián and his Saxon-inspired vocals, resulting in a modern-day depiction of NWOBHM with highlights to the precision which Gustavo delivers his beats and fills. Once again drinking from the fountain of classic Heavy Metal and Hard Rock the likes of Accept, Iron Maiden and Saxon, the band delivers the thrilling Go, with Alberto firing truly rumbling tones through his bass, while the album’s power ballad By Your Side offers us all cheesy but fun lyrics (“Would you find a reason / For falling in love with me again? / In my eyes, believe me / You’ll see all my halo of blame / I never thought that the night and the shadows / Could just even leave me so blind / Dreaming along with the times without sorrows / Can we please go back in time?”) and a classic pace, despite sounding too generic compared to the other songs. And lastly, closing the album we have an avalanche of modern and melodic Power Metal by Evil Hunter titled Open Up Your Eyes, a song recommended for breaking your neck headbanging inspired by German icons like Primal Fear, Gamma Ray and the early days of Helloween, with the music being led by Gustavo with his pounding beats and with a beyond electrified Damián on vocals.

The anti-hero, metalized warrior known as Evil Hunter is on the loose and ready to blow your ears with their undisputed metal music, and in order to keep track of what such dauntless powerhouse is up to you should check the band up on Facebook, and purchase your copy of the album from the Fighter Records’ BandCamp page or from the Xtreem Music webstore, as well as from iTunes, Amazon or Discogs. While Evil Hunter are on a crusade for Heavy Metal it’s our duty to show them all our support, proving once and for all while bands like them keep blasting sheer energy and passion through their instruments, heavy music will never cease to exist.

Best moments of the album: Evil Hunter, Heartbeat and Open Up Your Eyes.

Worst moments of the album: By Your Side.