Set sail and enjoy this concept album about a war between dragons, sea-creatures and men in the form of classic and imposing Symphonic Power Metal. 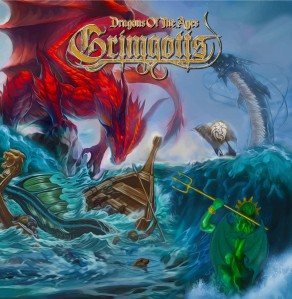 Formed in the town of Horsham in 2015 by vocalist Andy Barton as a joke parody band at first, British Symphonic Power Metal act Grimgotts initially described themselves as “probably the best Harry Potter themed symphonic power metal band to come out of West Sussex”, having released only one (unofficial) single under that gimmick. Fortunately for us, fans of symphonic metal music, Andy decided to shift the band’s focus to fantasy and nautical themes the following year, and with the help of other musicians Grimgotts released their debut EP entitled Here Be Dragonlords, followed by another EP that same year named Extenditus Playus, the EP Part Man, Part Beast, Part Dragon in early 2017, and the full-length album Lions of the Sea by late 2017 after teaming up with  keyboardist Fabio Garau, guitarist David Hills and bassist James Taylor.

In 2018 Grimgotts solidified their lineup with bassist Nelson Moreira and drummer Mo Abdelgadir, playing at Power Metal Quest Festival and supporting German power metallers Victorius in London, England, inspiring the band to set sail once again in 2019 with the release of their sophomore full-length opus, titled Dragons of the Ages, a concept album about a war between dragons, sea-creatures and men set in the same fictional world of Vale as per the band’s own previous albums. Produced by Alex Loader (Ethereal Sound Studio) and featuring an epic, dragon-infused artwork by Ryan Marter (Arctic Wolf Design), Dragons of the Ages will please most fans of bands like Edguy, Twilight Force, Rhapsody, Alestorm and Sabaton, among others, taking the listener on a vibrant journey to a whimsical land where heavy music is the ultimate soundtrack to epic battles.

The sound of the waves and the symphonic keys by Fabio invite the listener to join Grimgotts in War’s Come to Our Shores, reminding me of the epic and adventurous music played by UK’s own Alestorm, with Andy’s vocals being a mix of Sabaton’s Joakim Brodén’s and Italian icon Fabio Lione’s, also featuring guest Julia Zelg with her beautiful female vocals. After such vibrant welcome card it’s time for The Last Dragon Warriors, where Julia once again helps Andy to declaim the song’s classic Power Metal lyrics (“For every day that we are here / We prepare to take the world / With our ships we can sail to the sun / For years we’ve sat and we’ve decayed / But today with stand as one / A mighty army, hail to the lords”) while David fires some ass-kicking, incendiary solos to add more electricity to the overall result, whereas Ancient Waters sounds and feels even more epic and imposing, inspired by the symphonic music played by acts like Rhapsody of Fire, Blind Guardian and Sabaton, with David’s riffs and Nelson’s rumbling bass dictating its thrilling rhythm.

In War at Dawn Fabio fires strident key notes while Mo pounds and slams his drums with precision and feeling, resulting in a Symphonic Power Metal extravaganza perfect for heading into the battlefield, with Andy telling the story with a lot of passion. Then prance around the fire pit together with your friends to the sound of The King Under the Sea, where David keeps slashing his stringed weapon and Mo keeps smashing his drums nonstop, not to mention the epic vibe generated by Fabio’s keys; and folk-ish elements ignite the metallic feast entitled The Long Road, sounding more progressive than its predecessors but still loyal to the foundations of Symphonic Power Metal. In addition, Nelson and Mo once again shine with their refined techniques. And Turning the Tide, the most Power Metal of all songs, is another battle hymn where David is on fire with his riffs while Mo sounds like a stone crusher on drums, sounding and feeling very melodic, epic and, above all, as fast as good Power Metal should be.

Despite bringing forward fanciful lyrics as its main ingredient (“The Shaman spoke to me / Told me of my destiny / The Northmen march to war / The dragons still can fall / For our great ancient city / Let’s not delay / Pray, we won’t go astray”), Take to the Sea lacks more stamina and strength. It’s still very enjoyable, though, especially if you’re a diehard fan of the genre. Back to a more dense sonority, The Great Shadow is embraced by the crisp keys by Fabio, with Andy delivering high-pitched, tuneful vocal lines the likes of André Mattos (R.I.P.), and with that inspiring vibe going on until the song’s climatic ending, all spiced up by David’s flammable solos. Last but not least, get ready for over eight minutes of folk-like keyboards, galloping beats and bass, electrifying guitars and soaring vocal lines in Here Be Dragonlords, even presenting some deep guttural vocals on the second half of the song while its ending is amazingly epic, melancholic and powerful.

You can listen to Grimgotts’ tribute to the sea, to mythical creatures and dragons and, of course, to our beloved Heavy Metal on YouTube and on Spotify in its entirety, and after “returning” from such distinct voyage don’t forget to follow the band on Facebook, to subscribe to their YouTube channel, and to purchase Dragons of the Ages from the band’s own BandCamp page, as well as from Apple Music or from Amazon. And may those metal pirates and warriors hailing from the UK continue to invade our minds and enhance our senses with their imposing and symphonic music for many years to come, always fighting for glory, for freedom and for metal.

Best moments of the album: The Last Dragon Warriors, War at Dawn and Turning the Tide.

Worst moments of the album: Take to the Sea.