A short, dark and acid sample of the new phase by an up-and-coming Brazilian Extreme Metal duo, pointing to a bright future ahead of them. 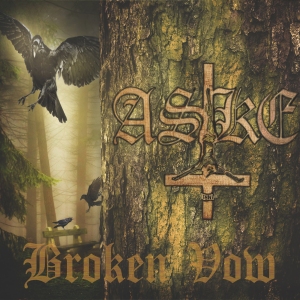 Forged by bassist Filipe Salvini and guitarist Lucas Duarte in 2009 in the city of São Carlos, in the state of São Paulo, Brazil, and being deeply rooted in classic extreme music styles, Brazilian Black/Death Metal act Aske has been making a name for themselves since their inception due to the high quality and originality of their music, playing in several local festivals and being invited to record the opening song for a Brazilian music program named Arte Extrema (with the single “Alcoholic Audition”). Now in 2017 Aske kick off a new phase in their career with a very cohesive and obscure EP named Broken Vow, pointing to a bright future ahead for the duo.

After releasing their debut demo in 2009 named A Dawn to Ruin, followed by another demo titled Scars from the Whip in 2014 and their first full-length album Once…, releases in 2015, Aske return with a different sonority due to a considerable lineup change, but still extremely loyal to their foundations in Broken Vow. The artwork in their new EP was conceived by photographer and designer Ayla de Lilith and bassist (and now also vocalist) Filipe Salvini himself, who commented that “our band has been through a short period of adaptation in the past few months, and we thought a new release with a few original songs would be a nice way to keep ourselves honest in our production process and ideal for us to get ready for a bigger future”. Recorded, mixed and mastered by Eugenio Stefane at 1979 Estúdio, Broken Vow brings to us metallers three brand new songs by Aske, a cover song for an underground classic by American group Pentagram, and a remastered version to one of their previous songs, released in 2016, as a bonus track, and as unique as all tracks in the EP might sound they all make sense when put together as you’ll be able to see. 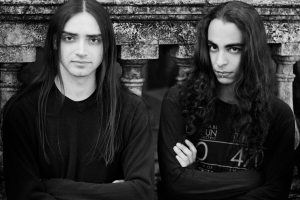 The groovy and piercing guitars by Lucas ignite the dark and melodic tune Meadows in Shade, a solid display of underground Death and Black Metal where Filipe showcases his vocal abilities as the band’s new growler, delivering anger and obscurity with his raspy gnarls, whereas the blast beats and cutting riffs in the kick-ass Death Metal onslaught Menschwerdung (German for “incarnation”) will penetrate deep inside your mind, sounding truly bestial and aggressive from start to finish. Furthermore, Filipe increases the savagery flowing from his growling while at the same time punching us in the head with his bass lines. Then in Broken Vows we’re treated to a more metallic and modern version to one of Pentagram’s cult songs(check the original version HERE), where both Filipe and Lucas are precise with their strings, and with Filipe also powerfully darkening the original vocal lines by the iconic Bobby Liebling.

Mardi Gras, the first single released in this new phase of the band, is another heavy-as-hell blast of Death Metal with some more Stygian elements from Black Metal, with highlights to the pounding riffs by Lucas. And, as aforementioned, as a bonus we have the audio of the official video for the song Übermensch (German for “superman”), originally released in their 2016 album Once… with previous lead singer Paulo Roberto still on vocals (as well as Luciano Galhardo on guitars and Renato Lourenço on drums). As a matter of fact, although their past formation feels more blackened than their current sonority, in my humble opinion both “versions” of Aske sound amazing.

What are you waiting for to know more about Aske? Go check what this Brazilian duo is up to on Facebook, listen to their music on YouTube, and buy your copy of Broken Vow (which can be enjoyed in full on Spotify) at the band’s own BandCamp page (and soon at the Sangue Frio Records’ webstore). After such strong EP, let’s wait and see what Filipe and Lucas will have for us next, and by that I mean we can surely expect a high-quality full-length album of extreme music hailing from Brazil, no doubt about that.

Best moments of the album: Menschwerdung.