Highly inspired by classic Hard Rock and Glam Metal from the 80’s, this five-piece act from Belgium will take you on an electrifying journey back to the Sunset Strip anno 1986. 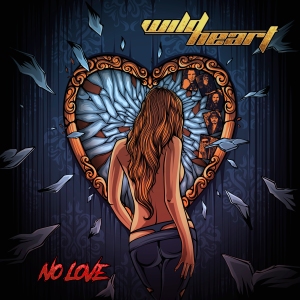 Hailing from Ninove, a city and municipality located in the Flemish province of East Flanders in Belgium, Hard Rock outfit WildHeart is a young and hungry band with a great passion for and highly inspired by classic Hard Rock and Glam Metal from the 80’s such as Whitesnake, RATT, Mötley Crüe, Dokken and Van Halen, taking you on a journey back to the Sunset Strip anno 1986 with their fun and vibrant music. Having the debauchery on stage and a carefree Rock N’ Roll vibe as their top priorities, the band comprised of frontman Farty, guitarists Foxx and Juice, bassist Stevie Dee and drummer Thunderberck is offering to our ears now in 2019 their sophomore album entitled No Love, a follow-up to their also excellent self-titled debut album released in 2016.

Produced by Joren Cautaers and mastered at Mass Destruction Production in Sweden by none other than Erik Martensson, known from bands like Eclipse and W.E.T., No Love is a thrilling feast of rockin’ tunes and sounds tailored for diehard fans of the genre who are always eager to meet new bands playing that classic sonority from around 30 years ago. Even the band’s attire seems to be taken from the golden years of Glam and Heavy Metal, looking like a more serious (but still uncompromising) version of our beloved Steel Panther and really old school Van Halen.

The old school intro The Mirror grows in intensity until A Stranger’s Eyes comes crushing our heads and warming up our hearts, exhaling pure Hard Rock for lovers of the music by Motley Crüe and Poison, with the blazing riffs by Foxx and Juice dictating the song’s frantic rhythm while Farty powerfully declaims its lyrics. After such powerful start, it’s time to put on your tight leopard pants and get ready to bang your head with the band in Nothing but Trouble, a song that sounds as if it was taken straight from an album recorded in the 80’s, with Thunderberck pounding his drums with a lot of precision and Stevie Dee adding the word “metal” to the musicality armed with his bass punches; whereas a catchy riff ignites the headbanging Dutch Courage, where all band members showcase their deep passion for Glam Metal in over five minutes of first-class rock music for the masses. Moreover, Farty steals the spotlight with another fantastic vocal performance, while the band’s guitar duo breathes fire with their refined solos.

The title-track No Love leans towards classic Skid Row with hints of Survivor’s all-time hit “Eye of the Tiger”, with the sync between guitars, beats and bass being simply amazing, therefore resulting in an energizing tune that should sound beyond electrifying if played live. Then showcasing an Iron Maiden’s “From Here To Eternity”-inspired riff, led by Thunderberck’s crushing beats and presenting a pure 80’s vibe, One Way Ticket to Paradise is more than perfect for singing along with the band or enjoying it while having a relaxing ride on the highway on a summer day; and WildHeart keep hitting our heads hard with their old school music in Rumours, a song that feels like a power ballad at times, but still bringing the groove and punch from faster rock songs. Needless to say, Farty once again delivers a great performance on vocals, not to mention the band’s usual incendiary guitar solos. 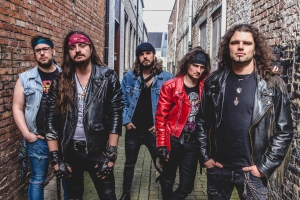 Now rev up your engines for a mid-tempo Hard Rock extravaganza entitled Good to Be Bad, infused with the heavier sounds by bands like Judas Priest and Primal Fear (especially during the song’s scorching hot, metallic riffs), turning it into a great metal hymn perfect for raising your fists in the air together with the band. The Winner’s Always Right is another explosion of classic rock and metal spearheaded by Foxx’s and Juice’s unstoppable axes, while Thunderberck keeps slamming his drum set in great fashion. Well, this song definitely asks for a colorful bandana, don’t you think? Anyway, adding hints of classic Rock N’ Roll and Southern Rock to their old school musicality, this rockin’ quintet offers us the fun and fresh Valerie, and you’re already aware that every single time a Hard Rock band writes a song named after a girl, the final result exhales awesomeness. Lastly, WildHeart probably thought it was a good idea to close the album with a true headbanger, and that’s exactly what we get in Tonight We Rock, bringing to our avid ears a flammable fusion of the music by Van Halen with Scorpions, hence making it impossible to stand still to the dynamic riffs and beats blasted by the band while Farty delivers what’s perhaps his most inspired vocals of the whole album.

No Love, which by the way is available for a full and delicious listen on Spotify, is more than just another album of Hard Rock. It’s a passionate, detailed and very honest tribute from WildHeart to all of their heroes from the 80’s, working as some sort of “time machine” for everyone who loves that classic rock sonority that has been embellishing the Sunset Strip for over 30 years. Having said that, don’t forget to show those Belgian metalheads you true support and admiration by following them on Facebook, by subscribing to their YouTube channel, and of course by purchasing your copy of No Love from several locations like Apple Music. After listening to No Love, I caught myself wondering if there’s a street that can be named the “Belgian Sunset Strip” in WildHeart’s homeland, having those obstinate rockers as one of the greatest new names of European Hard Rock and Glam Metal.

Best moments of the album: Dutch Courage, One Way Ticket to Paradise and Tonight We Rock.