Enjoy the debut album by a tenacious Nu Metal outfit that has all it takes to successfully spread their metallic and groovy wings all over the world.

Hailing from the rockin’ Los Angeles, California, a city that never sleeps, Nu Metal outfit Dirty Machine has been proudly carrying the flag of Alternative and Nu Metal since their inception in 2012, pulling major influences from bands such as Korn, Limp Bizkit, Slipknot, Linkin Park and Sevendust, having already shared the stage with renowned acts like Ghost, Sixx AM, Disturbed and Trivium. The band has quickly built a rabid underground following, especially in the Kansas City area due to getting regular airtime on the leading Kansas City rock station 98.9 The Rock and headlining the Jägermeister Stage at the 2016 Kansas City Rockfest.

Now in 2017 the band has joined forces with Zombie Shark Records to release their debut album, entitled Discord, featuring eight uproarious composition (plus three bonus songs) blending the most electrifying elements from Groove and Rap Metal that will inspire you to jump up and down and have a very good time with your friends. Moreover, Dirty Machine’s music is so cohesive and catchy that you’ll find yourself singing the songs along with the band and tapping on your desk even if you’re not a fan of Nu Metal at all, and that says a lot about a band that has all it takes to successfully spread their metallic and groovy wings all over the world.

Their modern fusion of the Nu Metal by Limp Bizkit and the Rap Metal by Bodycount is crystal clear from the very first second in the exciting title-track Discord, showcasing great sync between the aggressive rapper lines by lead singer David Leach and the clean vocals by guitarist and vocalist Darren Davis, as well as endless heaviness boosted by the song’s solid melody. The next tune, titled Seeds, is ready to be played on any radio station, where not even the harsher vocals by David make it too aggressive for some air time, while the guitars by Darren and his bandmate Arnold Quezada bring the right amount of fire to their musicality. And taking their pugnacity to a whole new level, Self Made Hero feels like an alternate version of Slipknot led by the song’s blazing guitars thoroughly blended with the wicked samples by DJ Ecusa. Put differently, this is one of those songs to keep jumping up and down nonstop during their live concerts. 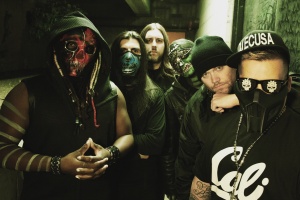 Social Recoil is another excellent display of fresh and thrilling Nu Metal, with Mike Weekley smashing his drums while Arnold and Darren follow him with their crushing riffs, not to mention the insane amount of groove coming from the low-tuned, metallic bass by Nathan Young. Now, are you ready for a “fight” with DJ Ecusa? That’s what you’ll get in Ecusa’s Nightmare, a three-minute whimsical party full of weird noises and voices, with the rest of the band effectively supporting this talented DJ and his “stunts”; and connecting instantly with the wicked feast led by DJ Ecusa we have Built, bringing more of Dirty Machine’s Limp Bizkit-Korn-Sevendust-inspired sounding, where the duo David and Darren keeps delivering amazing vocal lines, powerfully complementing each other, while Nathan and Mike sound as thunderous as possible with their bass punches and beats, respectively.

Although C4 is as heavy and groovy as the rest of the album, for some reason it doesn’t click to me, with its vocal lines being a bit disconnected from the instrumental pieces. Not only that, the guitars don’t sound as inspired as in the rest of the album, which makes me agree with the funny message sent by David at the end of the song saying not-so-nice things about the song itself. Fortunately, everything gets back on track with Wonka, where the band sounds faster, crazier and heavier than ever. This is what Dirty Machine need to do to really pump us up, providing a balanced mix of heavy riffs from Alternative Metal and witty vocals from Rap Metal and Hardcore. Not only this is a wise choice to close the album, but the demented screams by Darren add a lot of anger to the overall result, turning it into one of my favorite compositions in Discord.

If you want to know more details about the music and career of Dirty Machine, go to their Facebook page and YouTube channel for an overdose of high-end Nu Metal, and you can also support this dirty sextet by purchasing Discord at the Zombie Shark Records’ BandCamp, on iTunes or on Amazon. As Dirty Machine are a very active band, who knows, you might even get them in action in LA or any other city in the United States blasting their Nu Metal in one of your visits to their homeland, and I bet you’ll get addicted to their catchy and groovy music without even noticing.

Best moments of the album: Discord, Seeds, Self Made Hero and Wonka.

Worst moments of the album: C4.