Vile, obscure and impressive: these are just a few words that can be used to describe  the new album by Poland’s most influential Heavy Metal band of all time.

If anyone asked me “what’s the darkest and most obscure Heavy Metal band in activity today?”, I would probably point to the infamous Polish Blackened Death Metal band Behemoth. And with the release of their new album, The Satanist, they totally corroborate my opinion: from their Black Metal back in 1991 when they started in Gdańsk, Poland, until their current Blackened Death Metal, it’s easy to see their evolution to a more devilish music approach, which makes me think we should call it an “evil-lution”.

The Satanist is Behemoth’s tenth studio album, and the first after the band’s mastermind Adam “Nergal” Darski was diagnosed with leukemia in August 2010. It’s amazing to see how well he has been recovering from this fearful disease and how he was able to canalize all the pain and suffering into Behemoth’s music, proving to ignorant people he’s not being “punished by God” or any other stupidity like that just because he plays extreme music, but that he’s only a normal human being, a talented musician that had to fight for his life. Besides, if you were one of those people that got “happy” to see him being “punished” with leukemia just because of the type of art he creates, well, you’re A LOT worse than the creature you think Nergal is.

Anyway, let’s get back to the music, which is what really matters here. If you have a weak stomach or suffer from any heart disease, do not even begin listening to this album: The Satanist starts with the extremely heavy song Blow Your Trumpets Gabriel, with its brutal lyrics (“I saw the virgin’s cunt spawning forth the snake / I witnessed tribes ov Judah reduced to ruin / I watched disciples twelve dissolved by flame / Looked down on son ov god snuffed in vain”) and creepy pace. In case you love horror movies like I do, you must take a look at their music video for this song: it reminds me of some great movies such as The Omen, Hellraiser and especially The Ring. You can check the censored version at the end of this review, or the uncensored one HERE, but let me just inform you that the only difference I noticed between both are the girl’s blurred nipples in the censored version, nothing else. 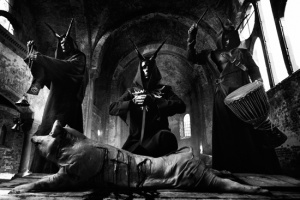 The next track, Furor Divinus, is more Black Metal, especially the drums by Inferno, while Messe Noire gets back to their later Death Metal with some amazing guitar solos at the end. The second single extracted from the album, Ora Pro Nobis Lucifer, is another tenebrous fast track perfect for live performances, with great riffs and an excellent job done by Nergal on vocals. Amen is as heavy as hell, an evil sonic massacre that fans will love, while the title-track The Satanist doesn’t reach the same level as the previous tracks, despite having an interesting atmosphere.

The album continues with Ben Sahar, an average track with good drums and riffs, and In the Absence Ov Light, another heavy track where Inferno pounds his drums mercilessly. The last track of the album, O Father O Satan O Sun!, is the perfect soundtrack for a horror movie, with its strong lyrics, frightful atmosphere, and the “speech” in the final two minutes of this song are more than amazing.

I guess I don’t need to say anything about the controversial lyrics, or about the superb album art by Russian artist Denis Forkas Kostromitin. Those are “extras” to a great work done by Nergal and his band, which becomes even more impressive due to the thin line we all know that exists between being awesome or totally ridiculous in the world of Black Metal. Let’s hope Behemoth continues on the awesome side, and that their evil empire of music keeps blowing our minds for many years to come.

Worst moments of the album: The Satanist and Ben Sahar.