Offering an exciting amalgamation of styles and elements, one of the most gripping Blackened Death Metal projects from the UK is back with the next step in its prosperous career. 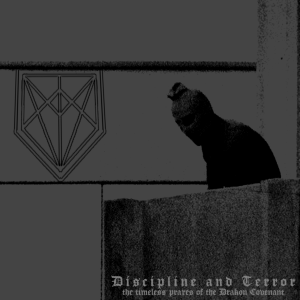 It’s becoming a delightful routine at The Headbanging Moose to publish a detailed review of the idiosyncratic and whimsical creations by British Blackened Death Metal project Goatchrist at least once a year. With that said, as 2016 draws to its dramatic close, there’s nothing better than carrying on with this special tradition with another top-tier EP by this West Yorkshire-based act led by the young and restless Dominator Xul’Ahabra, this time vampirically entitled Discipline and Terror (The Timeless Praxes of the Drakon Covenant).

Featuring American musician Invoker (Defecrator, Gloriam Draconis) on vocal duties instead of Dominator himself, Discipline and Terror (The Timeless Praxes of the Drakon Covenant) is a robust continuation to the prosperous career of the talented Dominator, being different in many aspects from his previous releases, the 2014 full-length She Who Holds the Scrying Mirror and the 2015 EP The Epic Tragedy Of The Cult Of Enlil, by offering the listener new vibrant elements of extreme music spiced up with nuances of other non-metal genres. And despite all advancements and variations in the music found in the EP, it still has that Goatchrist trademark sounding that makes this project stand out in the independent scene.

Bursting violence and anger, Enter Morain presents elements from Black, Death and Thrash Metal united in an aggressive way, with Invoker firing some Hardcore rasp vocals while Dominator delivers his usual darkened riffs and beats, never slowing down and always sounding electrified. The sensational The Burning of Jerusalem follows a pattern closer to Goatchrist’s previous releases, with its guitar riffs and solos, as well as its rhythmic blast beats, bringing a lot progressiveness and epicness to the musicality, making Invoker’s work on vocals easier and more dynamic when growling the song’s insurgent lyrics (“Now burn, Jerusalem. / For your reign has been broken, / By the sword of Western might / Know that we, your enemy, / Gift this blaze to thee, / So ye may bathe beneath its radiant light.”). Moreover, the compelling experimentations of Dominator with all his eccentric sounds and instruments are always a breath of fresh air to his compositions, sounding as if there were three or four songs in one like what we can witness in this excellent tune.

Then out of nowhere, Dominator simply surprises us with a gentle atmospheric (and almost symphonic) ballad named A Meditation in Dead Stillness, very introspective and melancholic from start to finish, not to mention its beautiful name, working as a cinematic intermission to all madness flowing from the following song, the elaborate The Shadow of Malintent. Invoker darkly declaims the song’s elegiac lyrics (“The darkness is coming / And I too there dwell: / Older than day or night, / With fury that none may quell. / Sever your causal ties. / And lift your head to meet / with my gaze; then in a daze / See your ego’s defeat.”) while the music brings forward a Blues-ish vibe with elements from classic Western scores, Doom Metal and Blackened Doom, never getting full Black Metal but still feeling as Stygian as the other songs. In addition, the precise sync between Dominator’s guitar solos and bass lines with Invoker’s growls help the duo tell the story proposed magnificently.

Best moments of the album: The Burning of Jerusalem.