One night with Dimmu Borgir with only 12 songs wasn’t enough for such intense audience like their Brazilian fans. 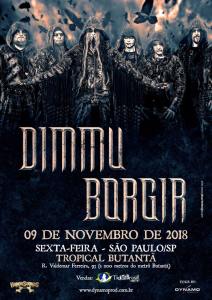 It took more than six years for the Brazilian fans of Dimmu Borgir to have the chance to see them live again. In the Latin American leg of the tour to promote their brand new album Eonian, released this year, and celebrating 25 years of career, the iconic Norwegian band had a single concert in Brazil, on November 9 in São Paulo at Tropical Butantã. The night started with a Venezuelan band called CULTURA TRES, playing for the very first time in Brazil. The group formed by Alejandro Londoño (vocal and guitars), Juan de Ferrari (guitar), Darrell Lacle (bass) and Benoit Martiny (drums) introduced their Sludge/Post-Metal to the public that was slowly filling up the venue; however, on the very first song they faced some technical issues as the microphones didn’t work at all. The band leader interrupted the performance to get the problems solved and, in very good Portuguese, he said they didn’t come this far not to play for the Brazilian crowd and thanked for the support before starting again their setlist. Alejandro is very charismatic and in between the songs he also mentioned it was an old dream to play in Brazil, and remembered when he was a kid he had Sepultura’s posters on his bedroom walls. Such words made all Brazilian metalheads give him a huge ovation. 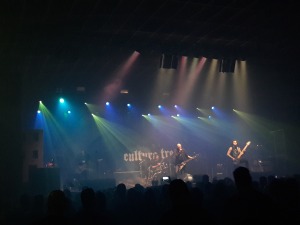 The band, nowadays based in Amsterdam (Netherlands), has four albums released, being La Secta the most recent one. During their 40-minute concert, they played songs in English and Spanish that define their history and represent the South American metal scene, such as the opening track Crosses and Lines. For the last song, El Sur de La Fe (“The South of Faith”, in English), Alejandro made an intense speech: he said he grew up in Venezuela, a country now broken and divided by politics and religion. The musician claimed to the Brazilian public to not let our beautiful country be divided and reminded us that Heavy Metal unites us. For those who are not aware about the Brazilian current political situation, recently a far-right, pro-gun, misogynist, sexist, racist, homophobic, conservative, former military politician has been elected president to rule the country for the next 4 years, so Alejandro knows what he is talking about. There is no doubt this concert in São Paulo was a great debut for the band, showing a huge potential to grow and gather more and more fans in the country.

With a new album, a new addition to the line-up and a new musical path (like it or not), DIMMU BORGIR performed to a full venue, but not a sold out night. The fans followed and enjoyed every moment of the short setlist of only 12 songs, in which 5 of them were from the new album Eonian. On stage, Shagrath (vocal), Silenoz (guitar), Galder (guitar), Daray (drums), Gerlioz (keyboards) and Victor Brandt (bass) impressed the fans with their technique and precision while playing the songs, with all fans having a very important role that night, always reacting in a positive and energetic way and singing all songs along with the band, while Shagrath’s theatrical performance of course makes the whole concert a lot more intense.

The night started with two new songs, The Unveiling and Interdimensional Summit, with the also new I Am Sovereign, Council of Wolves and Snakes and Archaic Correspondence being part of their setlist as well. The new album itself is not exactly what we are used to listen from Dimmu Borgir, but the songs worked well when played live with a lot of orchestral arrangements and some electronic elements and, apparently, the Brazilian fans enjoyed them. There was not much talking between the songs which made the concert run quite fast. furthermore, some very important classics from the band’s career were also played such as The Serpentine Offering, Gateways and the classic Puritania.

The closing part of the night had a powerful triumvirate of songs comprised of Indoctrination, Progenies of the Great Apocalypse and the amazing Mourning Palace, which marked the end of the night. Shagrath thanked all the fans and dedicated the last song to his long time friend Marcelo Vasco, graphic designer known for his work with bands like Slayer, Borknagar and Testament, and guitarist for Brazilian Black Metal band Patria, who came from far away to see the concert. Just like Vasco, many fans traveled long distances to see the Norwegian Black metal icons, and the band’s iconic frontman promised they shall return. All in all, it was a good night. We should consider that although the band is great on stage, the short setlist kind of disappointed the fans who waited such a long time to see them, but at least they had another great opportunity to watch Dimmu Borgir kicking ass on Brazilian lands one more time.