The God Of Thunder finally answered our call, and the most electrifying horde of Rock N’ Roll monsters in the universe stormed Toronto with their sensational, gory and theatrical performance for the first time ever.

The weather in Toronto couldn’t have been better for a night of heavy music, given the fact we’re in the middle of the winter and it was supposed to be freaking cold now. Not only there was no snow or rain, but with a temperature above 10 degrees we simply had the perfect conditions for praising the most awesome monsters in the world of Heavy Metal and Hard Rock, our beloved Finnish metallers Lordi, at the always comfortable The Opera House. But before Mr. Lordi and his horde hit the stage to mesmerize us with their sensational music and performance, we were treated to two very interesting Canadian bands that, if you don’t know them yet, certainly deserve our attention.

The first attraction of the night, MINETA, which is Polish for “cunnilingus” or “fellatio” (or if you prefer, in plain English it means giving oral sex to a woman), was more than just a music band, but a talented group of street performers blasting a mix of Ska, Punk Rock and Heavy Metal with a circus-inspired attitude, or as Mineta themselves like to call it, they play “Circus Party Punk”. Formed in 2012 in the city of Toronto, Mineta have just released their debut full-length album Polyglamerous, which was the base of their fun setlist, including the entertaining Fag Beef. While lead singer Bella Muerta stapled Christmas lights to her thigh, showed her boobs and urged the crowd to sing “daj mi mineta” with her (or “give me oral sex” in Polish), guitarist Tony Patrick Olivero played his strings while doing some circus tricks, Arty Basinski pounded his drums from the top of his stilts, and Matt Pazzol (bettern known as YuMB YuMB) was the weirdest clown I’ve ever seen to play bass guitar. There was still time for a sexy bunny to take some bloody eggs from her pussy and eat them. Yes, that all happened during their wicked show. Are you excited to see them live now?

The second opening act of the night was just as insane as Mineta, but instead of an upbeat Punk Rock they played a very violent and gory version of Death Metal defined by the band as “Progressive Theatrical Melodic Brutal Gore Death Metal”. I’m talking about Montreal-based act BOOKAKEE, a name that also has a sexual connotation meaning “a sexual practice in which several men ejaculate on the face of an individual woman”. Formed in 2007, the band comprised of Philippe Langelier, Simon-Pierre Gagnon, Mathieu Paré, Jonathan David and Jean-Philippe Bouchard haunted the souls of the fans at The Opera House with the visceral compositions from their latest album, named Whorrific, including the title-track Whorrific and the bestial Bookakee Blast. And just like mineta, those five metallers didn’t only play their infernal, technical and thrilling music, but also “helped” a girl give birth to her creepy baby, scalped a nun and were joined on stage by the one and only Donkey Kong. However, the most unusual part of the show was when what was supposed to be a wall of death became a dance floor to the sound of Haddaway’s dance hit “What Is Love”. I guess no one saw that coming. 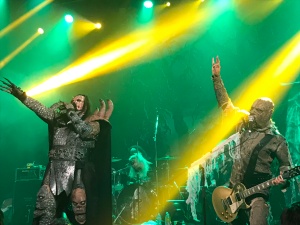 After such unique performances, it was time for Mr. Lordi and his horde of monsters to deliver an absolutely flawless performance to an audience avid for their music. It was the first time ever that LORDI performed in the city of Toronto, and the whole band gave their best to make it a memorable night for their Torontonian fans. Still promoting their latest release, the excellent Monstereophonic (Theaterror vs. Demonarchy), the band blasted all types of songs in their solid setlist, from the beautiful ballad It Snows in Hell to the high-octane rockin’ anthem Bringing Back the Balls to Rock, from the very old school song Icon of Dominance to their newest hit Hug You Hardcore, and so on, putting a huge smile on everyone’s faces the whole night.

But Lordi also had some help in their theatrical performance from the very beginning like what happened with Mineta and Bookakee, with the iconic Skeletor introducing the band and displaying the decapitated head of the sissy He-Man in the opening song of the night, the cheesy but fun Let’s Go Slaughter He-Man (I Wanna Be the Beast-Man in the Masters of the Universe). Also, a priest tried to exorcise Mr. Lordi but failed miserably. Who did he think he was dealing with, right? Anyway, Mr. Lordi was on fire the whole presentation, always interacting with the fans and singing all his classics better than ever. Moreover, before playing the fantastic The Riff, he mentioned the song had the same “special ingredient” (which is obviously a heavy riff, if you have no idea what he was talking about) present in the music by behemoths such as KISS, Judas Priest, Motley Crüe, Skid Row and Black Sabbath, proving that before being a monster, he’s a crazy metalhead just like the rest of us.

Despite being slightly “hidden” at the back of the stage, Mana and Hella both had amazing performances with their powerful beats and keys, in special our stunning  schizo doll emanating charm and electricity during the entire show. And while OX blasted his strings in an entertaining disco-rock-dancing bass solo, Mr. Lordi’s right-hand man Amen was the personification (or should I say “monsterification”?) of a true Rock N’ Roll guitarist, being unstoppable on stage with his cutting riffs and solos. Let’s say their job gets easier than other average bands as they have tons of beyond-catchy hymns to mesmerize us like Hard Rock Hallelujah and Devil Is a Loser, and when they ended the concert with their two most famous “questions”, Who’s Your Daddy? and Would You Love a Monsterman?, they left us all questioning when we’ll have the pleasure of seeing those incredible monsters of rock once again in the city. I personally hope it doesn’t take another 20 years for Lordi to come to Toronto, but I guess I don’t need to worry too much about it as, based on the flammable response by their fans, it won’t take more than a few months for that to happen.

Setlist
God of Thunder (KISS song)
SCG VIII: Opening Scene
Let’s Go Slaughter He-Man (I Wanna Be the Beast-Man in the Masters of the Universe)
Babez for Breakfast
Nailed by the Hammer of Frankenstein
The Riff
Bass Solo
Bite It Like a Bulldog
Icon of Dominance
Drum Solo
Bringing Back the Balls to Rock
Hug You Hardcore
It Snows in Hell
The Children of the Night
Keyboard Solo
Down With the Devil
Blood Red Sandman
Hard Rock Hallelujah
Devil Is a Loser

Encore:
Who’s Your Daddy?
Would You Love a Monsterman?
The Night the Monsters Died 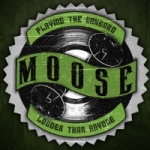 If you want to get more information about any of the bands featured at The Metal Moose Show, simply Google the band and/or the song name to find their official website and Facebook page and, more important than that, attend their live concerts and buy their music. Here at The Headbanging Moose you can find a detailed review of Swedish Groove Death Metal band Chugger (just click on the link below to read the review). Support your local bands… AND FOLLOW THE MOOSE!

On The Metal Moose Show this week (not necessarily in this order):

Click HERE to listen to this week’s episode on Spreaker.