“May the New Year bring you courage to break your resolutions early! My own plan is to swear off every kind of virtue, so that I triumph even when I fall!” – Aleister Crowley, Moonchild

It’s with these inspiring words found in the occult novel Moonchild, written by British occultist, poet and novelist Aleister Crowley in 1917, that The Headbanging Moose reaches another year end. Well, not before celebrating heavy music, which is the essence of this webzine, right? In order to honour all metal bands and musicians who made our year a lot more fun, here is The Headbanging Moose’s Top 10 Hard Rock/Heavy Metal Albums of 2014, excluding of course EP’s, best of and live albums. Party on, dudes!

1. Judas Priest – Redeemer of Souls (REVIEW)
The Metal Gods are finally back with another marvellous sonic storm forged in the fires of pure Heavy Metal.
Best song of the album: Halls Of Valhalla

2. Primal Fear – Delivering the Black (REVIEW)
Primal Fear once again deliver the awesome with their tenth studio album, their best since Seven Seals.
Best song of the album: King For A Day

3. Triptykon – Melana Chasmata (REVIEW)
One of the most expected albums of 2014 is a beautiful mix of Gothic, Black and especially Doom Metal as grandiose as they can be.
Best song of the album: Boleskine House

5. Axel Rudi Pell – Into the Storm (REVIEW)
A fantastic “storm” of heavy riffs and solos by one of the best Hard Rock/Heavy Metal guitar players from Germany.
Best song of the album: Burning Chains

6. Accept – Blind Rage (REVIEW)
And we salute Accept for another wonderful metal album, the third installment in this new amazing Accept-era.
Best song of the album: Dying Breed

7. Escapetor – Fear (REVIEW)
A serious contender for “Thrash Metal Album of the Year”, as heavy, invigorating and awesome as it can be.
Best song of the album: The Queen

8. Vanden Plas – Chronicles of the Immortals – Netherworld (REVIEW)
Get ready for an amazing journey in this new Rock Opera Album.
Best song of the album: The King and the Children of Lost World

9. Godsmack – 1000hp (REVIEW)
Lots of horsepower, groove, great riffs and strong vocal lines are just some of the things you’ll find in this amazing rock album.
Best song of the album: 1000hp

And here we have the runner-ups completing the top 20:

One of our recent reviews mentioned the law of conservation of mass by French chemist Antoine Lavoisier, which states that “Nothing is lost, nothing is created, everything is transformed.”  With that said, why not innovating a little and listing the Top 10 Cover Songs of 2014? Because in the end it’s metal bands working towards the conservation of heavy music. Let me tell you all those cover versions are amazing, but the first two go beyond that, they’re just perfect.

Also, in 2014 we were able to witness so many impressive releases from new and not so new independent bands (or at least not signed to major record labels) such as Orisonata, SouLost, Goatchrist, Valknacht, Ann My Guard, Septekh, Way Of Changes, Henriette B, Misanthrope Monarch, Witches Of Doom, Phobiatic, Prayed and Betrayed, Temple Of Void, Maahlas, Laugh At The Fakes, Lelahell, Diablery, Humbucker, Phantom, No Sin Evades His Gaze, Endzeit, among tons of other awesome bands and artists, it’s hard to name just a few. They’re indeed a huge slap to the face of those idiots who keep saying heavy music is dead and gone. Just Google those bands or search for them here at The Headbanging Moose and you’ll see what I’m talking about. Some of them even made it to the top10/20 list, as you can see.

You can check The Headbanging Moose’s playlist Top 10 Hard Rock & Heavy Metal Albums of 2014 @ Songza, with the best songs from each band of the list above, as well as amazing songs from lots of independent bands who rocked the world in 2014. And, of course, do not forget to listen to the weekly episodes of The Metal Moose Show by the Metal Moose Radio. Support you local bands… AND FOLLOW THE MOOSE!

And last but not least, before the Headbanging Moose goes into “hibernation” until the beginning of 2015, I’ll leave you guys with a song that’s way better than any of that Christmas garbage shoved down our throats every fuckin’ year. This song says it all.

Metal Xmas and a Headbanging New Year! See you in 2015!

Don’t remember what day is today? Iron Maiden can help you. 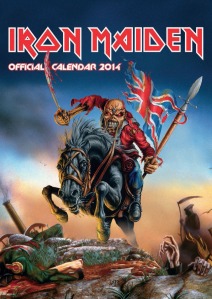 Next year will be my third consecutive year  using the Iron Maiden official calendar. I know that new technologies are pretty cool and that we don’t need almost all types of paper stuff anymore, especially with all the apps we have in our smartphones, but nothing beats an awesome calendar like this one from Iron Maiden. Moreover, as I had two previous versions of it, I guess I have enough “expertise” to review the 2014 one.

First of all, the 2012 calendar was terrific and by far my favorite one, mainly because it was all designed based on the event T-shirts from The Final Frontier World Tour. Each month represented a different country, region or event, providing us some kind of “journey around the world in 12 months”, making the final result really above and beyond. Then came the 2013 calendar (which I’m still using, of course), but this time it was not that good, albeit containing some nice images from event T-shirts mixed with pictures of the band playing live during the Maiden England North American Tour 2012.

Now with the 2014 calendar Iron Maiden go back to almost the same concept as for 2012, with each month representing an event T-shirt from their Maiden England Tour 2013, except for the month of May which is dedicated to their Trooper Beer. I enjoyed a lot the new calendar focusing again on Eddie, especially the months of February (Scandinavia), July (USA) and December (Brazil), and the fact that they left the live pictures as a secondary part of the whole product.

Published by Danilo Promotions Limited, the quality of the material used in the calendar is extremely good and resistant to falls (mine fell off the wall a couple of times and they’re all good) and even to water. Regarding the size, it’s about the same as any regular calendar (42.4 x 29.8 x 1 cm), and its weight is only 299 g.

You can find the 2014 calendar at the Iron Maiden official webshop, at Amazon.ca or at any regular store in your city for about 15 Canadian dollars. I bought mine at one of the Calendar Club stores at the Toronto Eaton Centre, and the cost was about two dollars more expensive than online. However, remember there’s still the shipping to be added to the final price if you decide to buy it online on Iron Maiden’s US Official Merchandise or on their UK Official Shop.

Anyway, the calendar is worth every penny, and it’s a very nice way to remember all those important international dates, all UK, US and Canada holidays, as well as the birthday of each band member. In my opinion, it’s an excellent Christmas gift for that Maidenmaniac friend you have at school or work, and even for your brother if he behaves himself and promises not to touch your Heavy Metal LP or CD collection again without your permission.

Not only that, you can use your calendar for one of those famous “calendar countdowns” we see in so many movies and TV series for a very special day in your life. How about using it for a countdown to that Maiden England Tour 2014 concert in Europe you’re attending during your summer vacation, for Wacken Open Air, Bloodstock Open Air, Summer Breeze, Tuska Open Air, Heavy MTL or any other crazy Heavy Metal festivals all over the world?

Oh yeah, you can use it as a reminder for your spouse or partner’s birthday too. Just please be careful not to “hurt” Eddie’s feelings by adding “things” like flowers and glitter to your calendar.