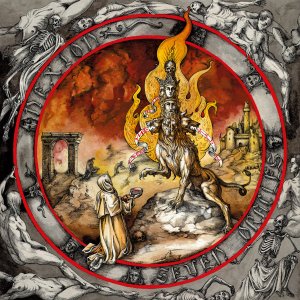 The nature of existence and human value and meaning are central themes in every religion, every spirituality and countless philosophies. It is thus fitting that Reykjavík, Iceland-based Black Metal horde Nexion’s first full-length opus, entitled Seven Oracles, concerns itself with these subjects, working as a revelatory “proclamation” of mythic proportions. Formed in 2016, the band comprised of Joshua Hróðgeir Rood on vocals, Jóhannes Smári Smárason and Óskar Rúnarsson o the guitars, Kári Pálsson on bass and Sigurður Jakobsson on drums offers in the follow-up to their 2017 self-titled EP a collection of the seven “oracles”, with each one addressing the nature of existence from a different angle, revealing and tearing away upheld “truths” like the serpent who gnaws the roots of Yggdrasil. Each song is a dagger, each chord is poison, and each utterance is fire, destroying the receiver’s sense of existential belief until there is nothing left. Mixed and mastered at Studio Emissary in Iceland, and featuring a cryptic artwork by José Gabriel Alegría Sabogal portraying a seven-headed beast appearing before a figure who offers it up a libation in exchange for wisdom within a self-conflating world, Seven Oracles has everything we love in extreme music, leaving us all completely disoriented after its 46 minutes of scorching and austere music are over.

Arising from the depths of the underworld, this Icelandic horde generates a Stygian wall of sounds in the title-track Seven Oracles, exploding into a raw and vile sonority led by Sigurður’s infernal drums while Joshua roars like a true demonic entity, not to mention the strident riffage by the band’s guitar duo, building an instant bridge to the also occult and ritualistic extravaganza titled Revelation of Unbeing, bringing elements from Blackened Doom and Doom Metal to make the overall result even more uncanny, with Jóhannes, Óskar and Kári being on absolute fire with their stringed weapons from start to finish. Then we have Divine Wind and Holocaust Clouds, a lesson in modern-day Black Metal made in Iceland that’s even more disturbing and grim than its predecessors, spearheaded by Joshua and his Death Metal-inspired growls and also presenting the trademark epicness of Scandinavian Black Metal; and there’s no time to breather as those ruthless metallers blast another sulfurous aria entitled Sanctum Amentiae, where the razor-edged riffs by both Jóhannes and Óskar are in perfect sync with the rhythmic, pounding beats by Sigurður.

In the fantastic and fulminating Utterances of Broken Throats the entire band hammers their instruments mercilessly, bringing to our ears a piercing and dense hybrid of classic Black Metal and contemporary Melodic Black Metal, or in other words, get ready to be utterly stunned and smashed by those talented marauders. And the tribal beats by Sigurður are gradually accompanied by the hellish guitar lines by Jóhannes and Óskar until all hell breaks loose in The Spirit of Black Breath, another feast of Icelandic Black Metal that will put you in a darkened trance throughout its over six minutes of devilish sounds and tones, followed by the climatic closing aria The Last Messiah, named after the eponymous book The Last Messiah, in honor of Norwegian philosopher Peter Wessel Zappfe, sounding as demolishing and detailed as all previous songs from such intense album of extreme music. Furthermore, Joshua’s growls get deeper and more berserk as the music progresses, all embraced by crisp guitar riffs, rumbling bass punches and a gargantuan amount of evil and obscurity for our vulgar delectation.

This seven-headed best of Black Metal summoned by Nexion is waiting for you at the Avantgarde Music’s BandCamp page or at the Sound Cave’s webstore in different formats such as the regular digipak CD version or the awesome orange/black marble LP + shirt bundle, and you can also get to know more about such distinct act of the underground Black Metal scene by following them on Facebook and on Instagram, and by listening to more of their music on Spotify. This is Icelandic Black Metal at its finest, and we must all thank Nexion for bringing to us all mere mortals such breathtaking and compelling display of extreme music, setting the bar really high for the band’s five evil minds in the upcoming releases, always sounding sulfurous, always extreme, and above all that, always loyal to the foundations of Black Metal and to their Scandinavian roots.

Best moments of the album: Divine Wind and Holocaust Clouds and Utterances of Broken Throats.