All hail the classic and straightforward Death Metal crafted by this talented Finnish quartet in their fast, violent and technical debut EP. 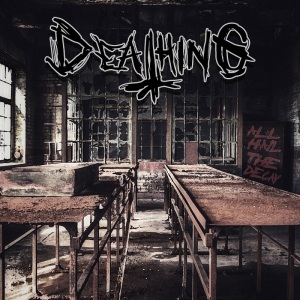 Hailing from the small city of Valkeakoski, Finland, not too far from Tampere and the capital Helsinki, a vile and raw Death Metal unity that goes by the straightforward name of Deathing is set to release their debut EP entitled All Hail The Decay, showing all their passion for extreme music through five solid and electrifying compositions. Having their building blocks taken from the ruins of a band named Ruindom in 2014, Deathing are currently formed of Marko Mäkinen on vocals and guitars, Aleksi Tossavainen also on the guitars, Rami Vartiainen on bass and Mikko Kivimäki on drums, highly influenced by Death Metal bands from the 80’s and 90’s while also creating their own style. Hence, the band made it clear that they have never intended to reinvent the wheel of Death Metal or to please everyone with their music, and All Hail The Decay is the perfect example of what they’re capable of doing and the path they are willing to follow with their future releases.

Marko and Aleksi begin to frantically smash their strings in the opening tune Kings of Terror, evolving into a solid Death Metal extravaganza recommended for fans of Death, Unleashed and other iconic bands, not to mention how technical and at the same time violent Mikko sounds on drums. Then a sinister intro revs up our engines for another brutal assault titled Crash & Burn, reminding me of the visceral Melodic Death Metal blasted by At The Gates and early Arch Enemy, with Marko’s furious and demented screams bringing even more adrenaline to the overall result; followed by Dead World Alive, another fast and furious feast of derange roars, slashing riffs and blast beats by Deathing, presenting a great job done once again by Mikko on drums while Marko, Aleksi and Rami are in absolute sync with their stringed weapons. In the excellent Sickness they need a little less than two minutes to pulverize our skulls ruthlessly, sounding perfect for slamming into the circle pit while their guitar riffs penetrate deep inside your skin. Needless to say, it will certainly work fantastically during their live concerts. And lastly, we have a cover version for Blinded By Fear, their personal tribute to one of their biggest idols At The Gates, with their amazing version bringing the rawness and rage of the original one (from their 1995 classic album Slaughter of the Soul) while also displaying the band’s own Finnish twist. 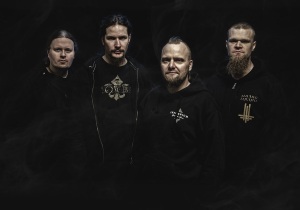 In a nutshell, Deathing are ready to take the world of Death Metal by storm with their honest and solid music, not trying to revolutionize the genre, as already mentioned, but working hard to keep their most beloved type of music alive in their homeland and anywhere else in the world where violent music is appreciated. And in order to show them your personal support and admiration, go check what they’re up to on Facebook, follow them on Instagram, listen to more of their music on Spotify and, above all that, purchase All Hail The Decay from their own BandCamp page (and soon from other retailers like Apple Music). Because you know, whenever a band like Deathing starts playing, we shall all hail Death Metal and bang our heads to the sound of the most violent and austere form of music in the entire world.

Best moments of the album: Crash & Burn and Sickness.