One of the most promising names of the Swedish metal scene returns with an inspiring new album that will bring you right into the dark forests and up on high mountains.

Creating an inspiring sound with various folk and power influences which will bring you right into the dark forests and up on high mountains, Jönköping, Sweden-based Melodic Metal outfit Rexoria is back in action in 2019 with a brand new opus entitled Ice Breaker, the follow-up to their 2018 installment Queen of Light and, more important than that, an album that will undoubtedly put a huge smile on the faces of fans of the music played by renowned acts like Doro, Battle Beast, Imperia, Aldaria, and several other bands that beautifully unite the electricity of traditional Heavy Metal with melodic and epic nuances. Mixed and mastered at Studio Fredman in Gothenburg, Sweden by Fredrik Nordström, and featuring an epic artwork showcasing a fearless valkyrie designed by Brazilian artist Jobert Mello from Sledgehammer Graphix (who has already worked with bands like Sabaton, Primal Fear and Grenouer), Ice Breaker is the perfect depiction of everything the music crafted by vocalist and keyboardist Frida Ohlin, guitarist and bassist Jonas Gustavsson, guitarist Cristofer Svensson and drummer Martin Gustavsson represents, being at the same time heavy, fast, melodic and exhilarating, paving a very promising path for these extremely talented musicians.

The electrifying riffs by Jonas and Cristofer permeate the air in the magical Velvet Heroes, a pure Hard Rock tune taken from the 80’s with a metallic touch brought forth by Frida’s soaring vocals, making it impossible to stand still to its inspiring rhythm and pace. Drinking from the same metal fountain as the iconic Doro, Frida delivers strident, sharp vocal lines in Fight the Demons, while her bandmates blast their instruments with tons of precision and feeling, sounding like a Swedish version of Accept with a feminine vibe; then it’s time to slow things down a bit to a passionate performance by Frida and the boys in Endless Nights, where Jonas and Cristofer are on fire with their guitar solos, resulting in a beautiful power ballad to warm up our hearts before the winter arrives. And if you consider yourself a courageous person, simply head into the always dangerous wilderness with Rexoria in Into the Wild, a mid-tempo tune where the galloping bass by Cristofer together with the rhythmic drums by Martin take the lead, being tailored for admirers of the golden years of Heavy Metal.

There’s more Melodic Metal flowing from their razor-edged guitars and pounding drums in Reach for the Heavens in Time, bringing an endless amount of electricity that will inspire you to prance and sing together with the band, whereas the title-track Ice Breaker is a lesson in Melodic Metal with an important message about the dangers of climate change, with its powerful backing vocals and galloping rhythm (that bands like Iron Maiden and Judas Priest made famous) supporting Frida in her quest for a better world. A screaming eagle and gentle piano notes are the main ingredients in the classy instrumental bridge Wind and Rain, before Rexoria embellish the airwaves once again with their charming metal music in The Rise of the Phoenix, leaning towards the Symphonic Metal played by bands like Nightwish and Epica. Needless to say, Jonas and Cristofer have another solid performance with their guitars, not to mention the song’s epic aura crafted by Frida’s keys. 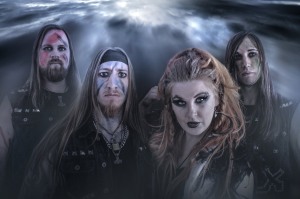 Putting the pedal to the metal the band salutes the gods of heavy music in Brothers of Asgaard, a song that has all it takes to become a fan-favorite where Frida ventures through more aggressive lands with her high-pitched vocals, also showcasing thrilling guitar solos and unstoppable beats, followed by The Raging Thunder, another song that blends the heaviness of classic metal music with the band’s ethereal and touching vibe, being highly recommended for banging your head nonstop or simply savoring Frida’s powerful vocal lines. The second to last track in Ice Breaker, titled Roaring, is by far one of the best songs of the album, a rockin’ extravaganza led by Martin’s crushing beats where it’s truly entertaining to witness Frida roaring like the she-wolf she is, alternating between rampant moments and high-octane passages. And closing the album we have Vår Verklighet (or our reality” in Swedish), featuring Swedish vocalist Niklas Isfeldt (Dream Evil), an epic composition by the band where Frida and Niklas make a fantastic vocal duet while the rest of the guys keep the music flowing nicely and powerfully, also bringing a soulful guitar solo as the icing on the cake.

In summary, the excellent Ice Breaker, which is available in full on Spotify and on sale from several locations such as the band’s own webstore, the Pride & Joy webstore, the Nuclear Blast webstore, Apple Music and Amazon, represents a huge step forward in the career of those four Swedish metallers, helping Rexoria emerge as one of the most promising names in the Melodic and Symphonic Metal scene worldwide. Hence, you can also show your support to Frida and the boys by following them on Facebook, getting connected to a band that’s not only going places, but that showcases a limitless potential to shine brighter and brighter as the years go by and, above all, with an honest and deep passion for our beloved heavy music.

Best moments of the album: Velvet Heroes, Brothers of Asgaard and Roaring.

Worst moments of the album: The Rise of the Phoenix.