A solid and entertaining album of old school Thrash Metal that marks the band’s return to the wolves alongside a survivalist pack mentality.

Since their return from a long hiatus in 2001, American Thrash Metal wolfpack Death Angel has been on a constant and solid roll, releasing a series of albums that, although might not be considered masterpieces, are extremely high-quality albums of good old, classic thrash. If their 2016 installment The Evil Divide is in my humble opinion their strongest album of this new phase of the band and one of their all-time best ones in terms of creativity, speed and rage, we can say their brand new opus Humanicide, the ninth studio album in their career, continues to pave their thrashing path and keeps the band more than just relevant in the current metal scene, therefore keeping the flames of old school Thrash Metal burning brighter than a thousand suns.

Recorded and mixed at Audio Hammer Studios in Sanford, Florida, with additional recording at Spiderville Studios in Oakland, California and mastered at Sterling Sound in Nashville, Tennessee, Humanicide is the band’s fourth album in a row to be produced by Jason Suecof (Charred Walls of the Damned, Crotchduster, Capharnaum) and also to have the same lineup comprised of vocalist Mark Osegueda, guitarists Rob Cavestany and Ted Aguilar, bassist Damien Sisson and drummer Will Carroll. In addition to that, Humanicide also marks Death Angel’s return to the wolves alongside a survivalist pack mentality, which is also reflected in the album artwork designed by renowned American artist Brent Elliott White (Megadeth, Trivium, 4ARM, Thy Art Is Murder, Amon Amarth), who already worked with Death Angel in their 2010 album Relentless Retribution and in their 2013 album The Dream Calls for Blood. Having said that, are you ready to join this unrelenting wolfpack in their quest for Thrash Metal?

An epic intro ignites the bold title-track Humanicide, with the strident guitars by both Rob and Ted morphing into a shredding feast while Mark’s vocals sound piercing and acid just the way we like it, thrashing our souls mercilessly for almost six minutes before we’re treated to Divine Defector, devastating form start to finish thanks to the pounding beats by Will, and albeit not a brilliant song it’s still classic Thrash Metal and a good option for slamming into the pit. And more melodic but utterly aggressive, Death Angel put the pedal to the metal in another feast of classic guitar lines, nonstop drums and raspy vociferations in Aggressor, with Rob and Ted doing a very good job with both their acoustic lines and electrified riffs. 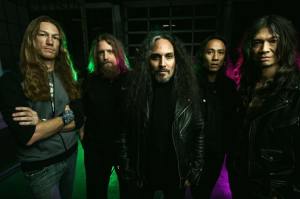 I Came for Blood, my favorite of all songs, is a fast and infuriated explosion of old school thrash where its guitars couldn’t sound more thrilling, while Damien and Will bring sheer thunder with their respective instruments, not to mention the song’s aggressive, take-no-prisoners-like lyrics (“The bloody nose of victory / Fueled by seeds of hate / Make peace with my enemies? / No chance, not today / I’ve traveled through the unknown / That is where I thrive / You chose to say my name aloud / So I shall never die”). Featuring the smooth piano by Ukrainian guest musician Vika Yermolyeva, Immortal Behated is a pensive and beautiful metal tune, very detailed and full of layers and nuances, and also presenting crisp guitar solos, intricate drumming and endless darkness to heighten our senses, whereas in Alive and Screaming they get back to their trademark berserk mode, with Mark being on fire on vocals supported by his bandmates’ potent backing vocals, showcasing once again a demolishing job done by Will on drums. And The Pack, as Mark himself says, is a call to arms, sounding as if the band wants to gather all thrashing wolves to fight side by side with them, with Rob and Ted stealing the spotlight with their flammable riffage.

Children Of Bodom’s own Alexi Laiho delivers a vibrant guitar solo in Ghost of Me, another fast-paced, high-octane tune with Mark firing his trademark screams, bringing to our ears riffs and solos played at the speed of light, therefore inspiring us all to slam into the pit like maniacs. Next, it’s time for Jason Suecof to fire a guitar solo in Revelation Song, focusing on the melody rather than the speed and offering another blast of dark poetry by the band (“Watch for their people dawning / Watch for their evil task / A negative space revival / A negative faceless mask, hey / A child to be so wicked / Coming to steal your mind / Lost in a destructive space / Lost in a revolting time”), with Damien’s bass sounding truly ominous in the background. Of Rats and Men is a generic version of their own music, which despite Mark’s efforts to make it more engaging the music never really takes off, while The Day I Walked Away, some sort of a “bonus track” included in all versions of the album (and that’s why I don’t understand why it’s called a bonus track), is one more not-so-exciting song by the band with a bland sound and vibe, but still presenting some good moments such as the guitar solos blasted by Rob and Ted.

In summary, as already mentioned Humanicide (available for a full listen on YouTube and on Spotify, and on sale from several locations as you can see HERE) is far from being a masterpiece, but it’s still an above average album of old school thrash that definitely deserves a shot. To be honest with you, I would love to see Death Angel go back to the more diverse and crisp musicality found in The Evil Divide, but of course I wouldn’t complain at all if they decide to keep following the same formula and deliver to us another ten albums on the same vein as Humanicide in the coming years. And for a great band like Death Angel, who have always crafted first-class Thrash Metal since their beginnings, that’s more than enough to keep us happy.

Best moments of the album: Humanicide, I Came for Blood, Immortal Behated and The Pack.

Worst moments of the album: Of Rats and Men and The Day I Walked Away.