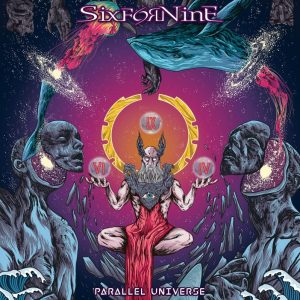 It’s time to bang our heads to the groovy and melodic Alternative Metal blasted by SiXforNinE, a four-piece band formed in 2011 in the always fun city of Athens, Greece, who are releasing now in 2019 a brand new and extremely entertaining opus entitled Parallel Universe, a follow-up to their 2015 debut self-titled album being highly recommended for fans of the music by bands like Disturbed and Breaking Benjamin. Comprised of founding members Georga Kapa on the guitar, Herc Booze on bass and Pete Outfox on drums, as well as Fotis Benardo (Necromantia, Septicflesh) on vocals, SiXforNinE have been on a roll since their inception, having already shared the stage with renowned acts such as Monster Magnet, Fates Warning, Leprous, and Memory Garden, and with Parallel Universe representing an evolutionary step in their relatively short but already solid career.

Recorded at DevasoundZ Studios in Athens, produced by Fotis Benardo himself, mixed by Paul Pavao (Disturbed, Stone Temple Pilots, Breaking Benjamin), mastered by Tom Baker (Rob Zombie, Nine Inch Nails, Mötley Crüe), and featuring a stunning artwork by Vagelis Petikas (Revolver Design), Parallel Universe showcases a very special chemistry between all four band members in each of its nine high-energy rock anthems, dealing with distinct topics such as a galactic travel via astral projection and the story of a refugee hoping for a better future. In other words, you better get ready to rock with SiXforNinE, as the Rock N’ Roll party crafted by those four talented Greek metallers doesn’t seem to have a time to end based on the amount of adrenaline flowing from their new album.

The band begins their feast of mesmerizing and groovy sounds in Every Cloud Has a Silver Lining, a lecture in progressiveness by the quartet where Fotis and his Miles Kennedy-inspired vocals walk hand in hand with George’s crisp riffs, not to mention Herc’s rumbling bass lines, followed by the heavier and more progressive Life Devouring Demons, reminding me of some of the incendiary creations by Mastodon. Furthermore, Pete brings endless intricacy with his beats in an awesome fusion of Alternative Rock and Metal with the heaviness of Progressive Metal, while Herc is on absolute fire with his metallic bass. And as heavy as high-end Alternative Metal can be, the band explodes our ears with the melodic and vibrant Bullet Off Its Course, a song that could easily be played in any radio station with Fotis once again stealing the spotlight with his passionate vocals. 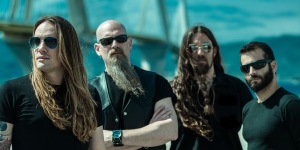 Then inspired by the music by Alter Bridge, Breaking Benjamin and other big names of the alternative scene, George slashes his strings beautifully while Pete’s beats bring groove and thunder to the music in Never Ending Road, whereas in More Than Words Can Say the band blends the heaviest elements from Progressive Metal with smoother rockin’ nuances, displaying a powerful job done by George on the guitar as well as Fotis on vocals, overflowing rage and anguish from start to finish. And it’s time to slow things down a bit and enjoy a pensive and whimsical musical journey by SiXforNinE in Counting Stars (a Parallel Universe), where George, Herc and Pete generate an enfolding ambience with their respective instruments, resulting in almost 10 minutes of ethereal passages and piercing sounds. Not only that, George’s guitar solo is a thing of beauty, adding an extra touch of finesse to a fantastic song that flows flawlessly into a catchy ending.

Very intricate and full of breaks and variations, Out of the Blue offers the listener the thunderous sound of the bass lines by Herc nicely complementing Pete’s wicked beats, being at the same time violent and very harmonious and with Fotis’ roars bringing even more stamina to the song’s already gripping vibe. In Sea of Lies we’re able to witness pure Rock N’ Roll flowing through the band’s instruments, sounding tailored for being played at top volume at a rock pub while everyone is enjoying a cold and tasty beer; moreover, George and Pete couldn’t sound more electrifying with their riffs and beats, also presenting the progressiveness that makes their music so compelling. And lastly, the angry bass by Herc ignites the closing tune Meditation Hyperjam, a sonic extravaganza of badass sounds and tones led by George’s heavy riffs while Fotis fires his potent vocals, putting a truly exciting ending to the album.

If you love rock and metal music with high dosages of complexity, groove and electricity, then Parallel Universe, which you can hear in full on YouTube and on Spotify, is the perfect solution to satisfy your craving. Hence, go check what SiXforNinE are up to on Facebook, including their tour dates, and grab your copy of the album from their own webstore, as well as from Apple Music or from Amazon. Fotis, George, Herc and Pete did one hell of a job in Parallel Universe, and there’s nothing better to show them our support and appreciation than by rocking like there’s no tomorrow together with this hardworking and amazing band coming from Hellenic lands.