The final breath of dark and heavy sounds by a now extinct metal unity will take you on a journey of isolation and hopelessness through the realms of Atmospheric Black Metal. 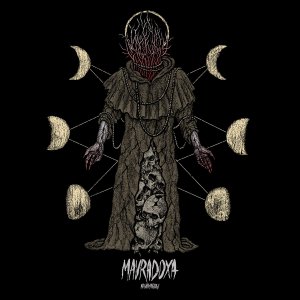 Let me begin this review by saying that I was absolutely shocked when I read earlier this year that the beyond promising and talented Rochester, New York-based Atmospheric Black Metal band Mavradoxa was calling it quits after only a few years of existence. Fortunately for all of us, fans of dark and atmospheric music, the band left us with three excellent full-length albums, those being their 2016 debut opus Sojourners, their fantastic 2017 release Lethean Lament, and more recently Nightmarrow, released earlier this year via Hypnotic Dirge Records. Although related to the tonal atmosphere and character of their previous albums, Nightmarrow sees the band developing and intensifying their song-writing ability, crafting simultaneously cohesive yet unpredictable songs with a progressive hue that is still rooted in Atmospheric Black Metal.

Engineered by Nicholas Alan at Subterranean Studios, mixed by Stephen Parker (Pillorian, Maestus), mastered by Justin Weis at Trakworx Recording, and featuring a stunning artwork by American artist Dylan Garrett Smith, Nightmarrow represents a meditation on the isolation and hopelessness of our age (particularly in the realm of the urban), and the consequences of technology and voracious consumption of resources. Mavradoxa’s founding duo Zachary Smith, also known as Nival, and Monica Finger, also known as Lux, together with guitarist Tyler Stasierowski (from The Highest Leviathan) and bassist Josh Mason (from Wandering Oak and Acrylazea), perfectly depict that feeling of solitude and desperation in Nightmarrow, positioning the unfortunately now defunct band as one of the most creative and interesting bands of the underground scene in the United States.

Featuring guest vocals by Matt Greenwood and an additional guitar solo by Nicholas Alan, the opening track Maple begins in full force with the razor-edged riffs by Zach and Tyler and the intricate beats by Monica generating a rumbling ambience perfect for Zach’s anguished roars, sounding as powerful and grim just the way we like it in Atmospheric Black Metal. Furthermore, the song’s progressive ending flows smoothly into the even darker musical voyage entitled The Carrion Shade, where Josh and Monica make the earth tremble with their respective instruments while the entire band darkly intones the song’s cryptic lyrics (“Black sun, black moon / In shadows, entombed / Flame, gold, & rust / slowly coalesced / in the pale of the / last winter sunset”). This is Progressive Black Metal at its finest showcasing all band members in absolute sync, therefore delivering a crushing wall of blackened sounds for our total delight, in special Zach and Tyler with their flammable guitars.

Matt Greenwood returns in the title-track Nightmarrow, where the music gets closer to what was offered to us in Lethean Lament, presenting more introspective and atmospheric sounds and passages. Zach sounds utterly enraged and acid on vocals, with Monica’s gentle clean vocals bringing more balance to this dense and bold feast of extreme music. Then an acoustic, ethereal bridge named Rustling Leaves soothes our souls and warms up our senses for Black Crystal Snowfall, featuring guest vocals by Swamp and sheer poetry flowing from its lyrics (“Ancestral whispers beckon us back / to a starless womb, to a time before / this place where all is languishing, / where all is ensnared by the grasp / of synthetic hands, becoming, / and ripping our bones from within”), also bringing forward elements from Blackened Doom added to their core atmospheric music. Monica’s steady beats and Zach’s and Tyler’s crisp riffs will undoubtedly embrace your soul from start to finish, reaching a climatic and piercing grand finale that gently morphs into a melancholic outro titled Umbra, where Zach and Tyler deliver a passionate performance with their acoustic guitars, concluding Nightmarrow on a high and pensive note.

If Nightmarrow, which by the way is available in full on YouTube and on Spotify, is indeed the last breath of Atmospheric Black Metal by Mavradoxa no one knows for sure. The band might decide to come back from their “retirement” one day to smash our senses again with their somber music, who knows? Until that day arrives (if it arrives,  of course), you can keep in touch with Zach and Monica on Facebook, and purchase your copy of Mavradoxa’s final journey through the realms of atmospheric and extreme music from the Hypnotic Dirge Records’ BandCamp page (or click HERE for all details about the band and where to buy their music), as well as from your regular retailers such as Apple Music, Amazon, CD Baby and Discogs. Having said that, it’s with a heavy heart that I finalize this review (or maybe I should call it a tribute), as heavy, ominous and splendorous as the music by the now extinct Mavradoxa. Thank you for your music, Zah and Monica, and I’m sure we’ll be hearing from you two again in a not-so-distant future.

Best moments of the album: The Carrion Shade and Nightmarrow.