Get ready for total annihilation, disembodiment and the disintegration of reality and existence in the form of a horrific strain of noise-infested black and death decimation. 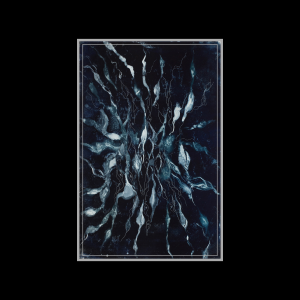 Ritual black and death invocation. Terror noise-metal aimed at disintegrating one’s being and entire existence through the sheer force of hell in audial form. These are some of the words that can be used to describe the visceral music found in Void of Infinite Horror, the first full-length opus by British Black/Death Metal one-man sonic extermination entity Vessel of Iniquity. Formed in 2015 in Oxfordshire, a county in South East England, in the UK, Vessel of Iniquity is the brainchild of vocalist and multi-instrumentalist A. White, a talented musician who definitely knows  how to transform austere topics such as annihilation, disembodiment and the disintegration of reality and existence into a horrific strain of noise-infested black and death decimation.

Once again crafted and home-recorded in total seclusion, mastered by James Plotkin (Plotkinworks) and featuring layout and design by M. Alagna, Void of Infinite Horror offers the listener five unrelenting tracks of extreme music, sounding claustrophobic, abominable and twisted, all enfolded by a minimalist and dark cover painting by American artist Ellen Hausner named “Untitled (Monoprint series 1A)”. If you’re a fan of the massacring industrial noise scarification by entities like Gnaw Their Tongues, Sutekh Hexen and Abruptum, as well as the grandiose and bludgeoning sonic warfare of bands like Teitanblood and Impetuous Ritual, you’ll have a blast with Void of Infinite Horror, positioning this insanely heavy and wicked one-man army of darkness as one of the most promising names in the the vast but yet unexplored land of what can be labeled as “Terror Noise Metal”.

And the opening track of the album, beautifully entitled Invocation of the Heart Girt With a Serpent, is already the perfect depiction of that so-called Terror Noise Metal, offering our ears a disruptive, eccentric and dissident avalanche of sounds and noises by A. White, with its drums sounding like a machine gun perforating our skulls mercilessly. Babalon is even darker and more menacing, presenting low-tuned sounds and deep, obscure roars that feel more like whispers, resulting in a modern-day Blackened Doom feast tailored for fans of devilish music. Hence, this track could easily be used as part of a horror movie score due to its strength, range and potential to instill fear in our hearts.

A. White’s demented onrush of sounds and noises goes on in Void of Infinite Sorrow, blending the most Stygian elements from Black and Doom Metal in its sluggish beats, thunderous riffs and bass, and malevolent rhythm, also presenting a menacing aura that ends up boosting its impact even more. If you think A. White and his Vessel of Iniquity will have to slow down at a given point to let us breathe you’re absolutely wrong, as his hurricane of dementia only gets stronger and darker as the music flows in Mother of Abomination, being utterly insane from start to finish, before the music switches from total chaos to an atmospheric and ethereal vibe in Once More Into the Abyss, where A. White delivers to our perturbed minds an endless amount of hypnotizing and damned sounds. Furthermore, I’m not sure if this can be called Atmospheric Black Metal, Drone, Noise, none of these, or even all at once, proving how unique and vile Vessel of Iniquity’s music can be.

If I had to summarize the music found in Void of Infinite Horror in one word, that would certainly be “chaos”, and if chaotic music is exactly what you crave in underground metal you must give Vessel of Iniquity a chance and support such distinct one-man act by following him on Facebook, and obviously by purchasing your copy of the album from the Sentient Ruin Laboratories’ BandCamp, from the Xenoglossy Productions’ BandCamp (in a fancy, old school cassette format), from CD Baby or from Discogs. No one knows exactly what lies ahead for A. White and his Vessel of Iniquity, as it’s not an easy task to predict what type of madness and experimentation musicians like him might add to their compositions, but at least we can rest assured that, as long as this cryptic metal entity is alive, chaos will reign.

Best moments of the album: Invocation of the Heart Girt With a Serpent and Babalon.