Enjoy the story about the journey of a man, wandering old forgotten paths in search of nature and solitude, told by a newcomer German Epic and Pagan Black Metal hailing from the Thuringian Forest. 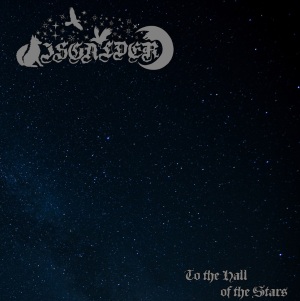 Founded in 2017 by vocalist and guitarist Grimwald (Dauþuz, Wintarnaht) and drummer, bassist and keyboardist Moppel to hail earth and iron, German horde Isgalder has just emerged from the Thuringian Forest with a splendid piece of Epic and Pagan Black Metal influenced by early Falkenbach and Bathory, titled To The Hall Of The Stars, their debut EP that tells a little story about the journey of a man (the journey to the hall of the stars), wandering old forgotten paths in search of nature and solitude. Comprised of three original songs taken from the band’s forthcoming album and alternate versions of those same songs, the EP will provide you a very good taste of what Isgalder, which by the way is Old-High-German/Germanic and means “cold incantation” or “icy chant”, are capable of. Furthermore, although Grimwald and Moppel played all instruments and vocal parts in the EP, Isgalder are now comprised of the aforementioned dynamic duo plus VRCHTR on rhythm guitar and Aussen Geist on bass, meaning we can definitely (and hopefully) expect to witness the extreme music by Isgalder be materialized in the form of one or more live concerts in the near future.

The keys by Moppel kick off the epic and imposing tune The Ravendale, bringing an interesting “duel” of clean vocals and harsh gnarls, also presenting piercing guitar lines and lyrics that exhale Folk and Pagan Metal (“On farthest shores, there rest my fate / Far from mankind, the morbid, the pale / Native is that soil; silent and primordial / Astute raven summon me, to the hidden vail / The Ravendale / Forgotten and forsaken / The Ravedale / In solitude awaken”), all topped off by a climatic finale. Elder Wisdom, a very detailed and melodic creation by the duo, already starts in full force, bringing elements from Atmospheric Black Metal to their core Pagan and Black Metal, with Grimwald growling and gnarling nonstop while Moppel delivers brutality through his beats and some sort of “peace” through his keys, all at once; and as atmospheric and dense as both previous songs, Soaring Mountains showcases an old school Black Metal base solidified by  the band’s blast beats and scorching riffs, but with a strong Pagan Metal vein present in Grimwald’s growls and Moppel’s keys. Moreover, you’ll certainly feel compelled to sing its lyrics along with Isgalder (“Great soaring Mountains / Grey stone mystic monument / Arise against the sky / Wilderness defend”). 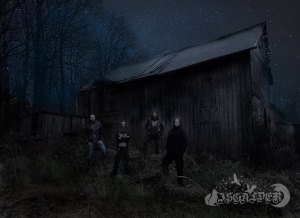 As already mentioned, side B of To The Hall Of The Stars contains an alternative version of the EP, without keyboards, varied vocals and a different mix. For instance, The Ravendale sounds rawer and more piercing, closer to traditional Black Metal, while Elder Wisdom is even more devastating and epic and Soaring Mountains goes straight-to-the-point as well, displaying an enhanced Black Metal vibe and feeling slightly less Pagan Metal. You can compare the regular and alternate versions of each song by listening to the full EP on YouTube, and don’t forget to follow Isgalder on Facebook and on YouTube. In a nutshell, To The Hall Of The Stars (on sale at the band’s own BandCamp, at the Hellthrasher Productions’ BandCamp, at the Naturmacht Productions’ BandCamp and at the Narbentage Produktionen’s BandCamp, as well as at Discogs in CD or cassette version) is a fantastic “appetizer” to what we can expect from Isgalder when they release their first full-length opus, and as soon as that happens we will be able to happily and willingly succumb to their cold incantations.

Best moments of the album: Elder Wisdom (both regular and alternate versions).