Welcome to the amazing world of Melodic Metal ruled by an up-and-coming four-piece act from Sweden. 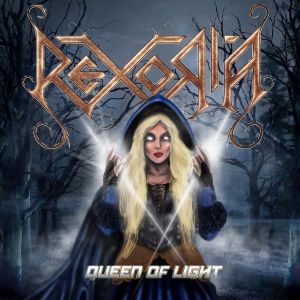 Hailing from Jönköping, is a city on the shores of Lake Vättern, located in southern Sweden, Melodic Metal quartet Rexoria have been on a fast and healthy rise since their inception in 2016, having already toured several countries with bands like Bloodbound and Crystal Viper, as well as supporting renowned acts such as Backyard Babies, Entombed A.D. and Battle Beast in their homeland Sweden. And the reason for that amazing upward trend is obviously the extreme talent of their band members, their devoted passion for Heavy Metal and, as the icing on the cake, the stunning performance by frontwoman Frida Ohlin, who by the way was one of the finalists in the Swedish competition Årets Rockröst in 2016 (which would translate as “The Rock Voice”).

Blending their core Melodic Metal with folk influences, Rexoria released their debut EP in 2016, entitled Moments Of Insanity, followed by another EP in 2017, The World Unknown, both presenting what this talented Swedish band is capable of. However, it’s now with their first full-length album, elegantly named Queen Of Light, that fans of the more melodious side of Heavy Metal will be able to experience a full-bodied, detailed blast of the classy music crafted by Rexoria, heavily inspired by the golden years of Heavy Metal and spiced up by nuances of contemporary Power and Folk Metal. Put differently, if you’re crazy for Scandinavian Metal the likes of Stratovarius and Nightwish, you might have found your next addiction in heavy music.

The movie-inspired intro The Land in Between transports the listener to the whimsical and unknown world of Rexoria, with the guitar duo comprised of Jonas Gustavsson and Cristofer Svensson opening the gates for the harmonious vocals by Frida to welcome us all to the first song of the album, titled Stranded, a precise fusion of Melodic and Symphonic Metal highly inspired by bands like Epica and Nightwish; followed by the title-track Queen of Light, feeling even more imposing and melodic and also bringing elements from the classic Heavy Metal played by Doro, or in other words, it’s 80’s metal with a catchy chorus and electrifying riffs and beats where you can sense the amazing smell of epicness and power that permeates the air throughout the whole song. And leaning towards modern Folk Metal we have Voice of Heaven, with the keyboards by Frida generating a gentle ambience while the rest of the band makes sure the sounding remains as metal as it can be.

Way to Die is another stylish tune that effectively combines the more trenchant elements of Heavy Metal with the elegance and delicacy of symphonic and operatic music, with Frida once again having a remarkable performance with her potent voice. After such high-end display of heavy music we’re treated to a passionate, melancholic and gripping ballad named Song by the Angels, again taking us back to 80’s Heavy Metal with pure romance flowing from all instruments, especially the guitars by both Jonas and Cristofer which add tons of feeling and electricity to the overall result, whereas in Next Generation old school guitar riffs are in perfect sync with the precise beats by drummer Martin Gustavsson, not to mention the song’s fiery guitar solos and the epic vibe that supports the band from start to finish. The next tune, entitled The Saviour, offers more of Rexoria’s traditional metal lines with hints of Folk Metal and 80’s Hard Rock, with Jonas and Cristofer displaying all their passion for Melodic Metal by delivering smooth lines with their instruments and building the stage for Frida’s vocals to shine once again.

Hurricane is perhaps the most Heavy and Power Metal of all songs of the album (and definitely the most inspiring one), which is something you can already expect taking into account its name, showcasing an accelerated rhythm led by the potent drumming by Martin while Frida steals the spotlight yet again with her resonant vocal lines. Now think about an epic tune with a serene background led by the stunning vocals of a female warrior? That’s exactly what you’ll get in My Spirit Will Run Free, a song that can’t get any more 80’s than that, before the closing act You’ll Be Alright brings more of the band’s traditional musicality, with Jonas, Cristofer and Martin providing a beyond solid support for Frida to mesmerize us one last time, and when the song is over you’ll simply realize there’s nothing bad or out of place in the entire album.

You can purchase Queen Of Light at several online stores such as Pride & Joy Music, Nuclear Blast, Ginza.se and Bengans, as well as on iTunes and on Amazon, and remember you can always keep track of all things Rexoria through their official Facebook page, and listen to their music on YouTube and on Spotify. Then after having Queen Of Light on your hands, you’ll finally be allowed to enter the fantastic world of Melodic Metal ruled by Rexoria and let those four Swedish metallers guide you on a journey through the waves of harmonious and elegant Heavy Metal.

Best moments of the album: Queen of Light, Song by the Angels and Hurricane.