Bending the genre boundaries and creating a unique musical journey in the spirit of classic progressive albums of the 70’s, this Finnish act returns from a four-year hiatus to offer us all their music in its most uncompromising form. 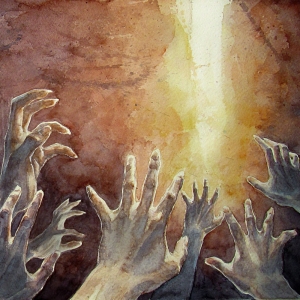 As a nice Christmas gift to all readers of The Headbanging Moose, I have for you today Denial/Survival, the fourth full-length album by Finnish Progressive Black Metal trinity Antipope, whose music is according to the band itself a free expression of whatever styles, themes or moods might be needed to relate the particular message to the listener. Although the band is considered by many as Black Metal, the name Antipope stands for liberation from any and all dogmas and renouncement of intellectual and ideological authorities, being the soundtrack for self-discovery, death and rebirth.

Formed in 2004 in the city of Oulu, the band comprised of founder Mikko Myllykangas on vocals, electric and acoustic guitars, bass guitar and programming, Antti J. Karjalainen on guitars and Tuska E. on drums returns from a four-year hiatus with Denial/Survival, presenting their characteristic style of bending the genre boundaries and creating a unique musical journey in the spirit of classic progressive albums of the 70’s. Combining elements of Extreme Metal, Melodic Death Metal and even a bit of Flamenco, and featuring an imposing artwork by Finnish artist Tiina Kaakkuriniemi, Denial/Survival will offer you the music of Antipope in its most uncompromising form, and I’m sure you’ll have a good time while listening to such diverse album of extreme music.

In the opening track, titled Waters Below, we already face the multi-layered music by the trio, with an instrumental beginning that goes on for about two minutes before devastation arrives through the hellish growls by Mikko in a rhythmic and epic display of modern Black Metal; followed by Flat Circle, which presents hints of Atmospheric Black Metal infused in their more straightforward Scandinavian Extreme Metal. Moreover, Tuska does a solid job going from a more progressive style to visceral blast beats that live up to the legacy of Black Metal. And in the title-track Denial/Survival the band speeds up their pace and distills their venom through their austere words (“I woke up in the land of denial / It’s true the guilt is all you care for / Seeing you and the rest of your kind / Wallowing in self-pity and mutual rape”) in a true headbanging hymn perfect for cracking your spinal cord, which obviously translates into one of the top moments of the album.

The ominous, darkened instrumental bridge Der Sadist sets the tone for the even more obscure Black Metal chant Hunt, with the mid-tempo beats by Tuska being effectively blended with the crisp guitar lines by Antti, sounding more introspective and melancholic than the rest of the album. Then get ready to be smashed by the futuristic and melodic (but still very raw) onrush of extreme music named True Anarchist, sounding at times like Marilyn Manson, with Antti once again firing his captivating riffs, before the atmospheric and ominous creation Mindlessness Meditation brings forward cavernous bass lines by Mikko, who darkly declaims the song’s cryptic lyrics.

An Unconditional Ritual to Summon the Prince of Darkness, a slow-paced chant that could actually be used to summon an evil entity, presents words that sound and fell infernal (“This is how it begins, the last phase / A thousand step descent into the unknown / The words extend the rays of light / From the shadows a new mind”), whereas in Tragic Vision we can feel their music growing in intensity as time passes by, with Mikko and Antti making a great guitar duo by blasting some wicked riffs. Furthermore, the whole song has a touch of epicness that makes it very exciting to listen to, not to mention Tuska’s galloping beats in perfect sync with his bandmates’ stringed weapons. And as the closing song of the album Antipope deliver what is also the longest of all tunes, entitled Resolution, which could easily be used in the soundtrack for a slasher flick or a Tarantino-style movie, helping the album stand out among other extreme bands for its versatility and innovative approach.

I’m certain that, after listening to Denial/Survival, you’ll be more than curious to know more about Antipope and their distinct career, and in order to do that simply go check what Mikko & Co. are up to on Facebook, watch to their classy videos on YouTube and listen to their music on Spotify, and purchase the album through their BandCamp page or on iTunes. There’s nothing better than celebrating Christmas with some nice extreme music made in Finland, a country where Santa Claus is supposed to live (in the cold and charming Lapland, the largest and northernmost region of the country), so don’t waste your time and go show your support to this very interesting underground act. Well, if you don’t do so, I guess Santa will have to cross “somebody’s” name from his list next year.

Best moments of the album: Denial/Survival, Hunt and Tragic Vision.