Close your eyes and enjoy the first of two sister albums by this talented American band, introducing you to their unique fusion of groove-oriented sounds and captivating storytelling lyrics. 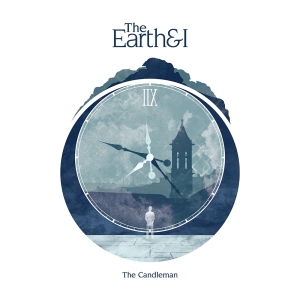 Playing a mix of groovy, moody, syncopated metal and more upbeat, accessible rock tunes inspired by bands like Periphery, Animals as Leaders and TesseracT, American Progressive Rock/Metal metallers The Earth And I (also known as TEAI, pronounced /tay/) are releasing their debut full-length album, titled The Candleman, the first of two sister albums (with the second one, named The Curtain, being scheduled for an early 2018 release). Featuring seven tracks through the course of 35 minutes, The Candleman will not only introduce you to the world of TEAI, but present to you in great fashion their unique music heavily focused on a fusion of groove-oriented sounds and captivating storytelling lyrics.

Formed in 2013 in the city of Warwick, New York, in the United States by guitarists Daniel Siew and Liam Zintz-Kunkel, drummer Suss Mackenzie and bassist Nick Petromilli, who were later joined by neo-soul vocalist Kendyle Wolven in 2017, TEAI aim at filling a serious need in the Progressive Metal world for non-operatic female vocals with The Candleman and The Curtain. Displaying a minimalist and classy artwork designed by the band’s own guitarist Daniel Siew, The Candleman definitely succeeds in bringing that vocal variation desired by TEAI to their metal music, effectively helping the band make a name for themselves in underground Progressive and Groove Metal.

The beautifully-titled atmospheric intro The Lake Under the Desert warms up the listener for the groovy and thunderous I. CGMTC (Life in the Sunset Zone), a powerful tune where Daniel, Liam and Nick create a wave of rumbling sounds with their strings, setting the stage for the mesmerizing vocals by Kendyle to shine brighter than the sun. Moreover, the song brings moments of hope flawlessly blended with passages full of anger, resulting in a full-bodied Progressive Metal experience for our senses enhanced by its poetic lyrics (“In the harbor, / the ship had turned to stone. / They watched from the Belfry, / long bones, and cold and unsound, / their skin drawn tight / over emaciated forms.”). Then in II. Little Frames, a more obscure, introspective creation by TEAI, the fiery Kendyle keeps blasting her potent vocals in a beautiful paradox with the harsh growls by Nick, with the musicality alternating between more technical Progressive Metal and rowdy Groove Metal. Put differently, simply close your eyes and let this feast of contrasting sounds penetrate deep inside your soul.

In the interesting And Now for a Slight Departure the band adds elements from Ska and Punk to their music, creating an upbeat vibe led by the high-pitched vocals by Kendyle and the rhythmic and precise beats by Adam, resulting in what can be considered a  more “radio-friendly” version of TEAI; while in Sugar High they get back to a darker sonority, with Daniel, Liam and Nick once again doing an amazing job with their axes, sounding like the bastard son of Dream Theater with Evanescence, but also presenting elements from Alternative Metal and Hard Rock to spice things up a bit.

Then as a break from all their groovy and wicked sounds TEAI offer us all a serene ballad named The Hollow Deluge, with Kendyle passionately (and effectively) declaiming its pensive words (“I stand before the most cloudy of waters. / I survey the scene with reserved apprehension. / There’s something not right here, like I’ve been here before. / It’s strangely familiar. / It’s almost uncomfortably comfortable.”), all boosted by the electricity that rises in the last part of the song, flowing into a climatic ending. And as the icing on the cake we have Skies Like Fences, bringing forward over 7 minutes of intricate drumming, metallic and extremely groovy bass lines, flammable guitar solos, deranged growls and endless energy, or in other words, an extravaganza of Progressive Metal once again led by Kendyle and her charming voice.

You can enjoy The Candleman in its entirety on YouTube or on Spotify, follow TEAI on Facebook, and buy your favorite version of the album through the band’s own BandCamp or webstore (in digipak or MP3 format, as well as on iTunes and on Amazon. In a nutshell, TEAI set the bar really high for themselves with The Candleman, but of course if they keep doing what they’re capable of in The Curtain next year, which is delivering high-end metal with a strong progressive vein, I’m sure all of us fans of Progressive Metal will be more than happy when their second album is released, just like how we are now with The Candleman.

Best moments of the album: I. CGMTC (Life in the Sunset Zone) and Skies Like Fences.