Join the Brotherhood of Thrash Metal spearheaded by one of the heaviest, most technical and most electrifying bands on the entire planet or die.

Featuring a menacing and classy artwork by Israeli artist Eliran Kantor, who has been working with Testament in all their releases since 2008, Brotherhood Of The Snake transpires pure Thrash Metal in all its 45 minutes of duration. Of course there are also their classic mid-tempo and slow, heavy tunes, but more than half of the album is comprised of high-speed thrashy material that will certainly ignite some demented mosh pits during their live concerts. Regarding the main concept of the album, Chuck has stated in one of his interviews that the album draws lyrical inspiration from the ancient astronaut hypothesis, namely through the Ancient Aliens television program. Furthermore, he said the title comes from the name of an ancient secret society (set up thousands of years ago by an alien named Ea or Enki, by the way).

The initial cavernous roar by Chuck in the title-track Brotherhood of the Snake is the epitome of the whole album, being barbaric, intimidating and thrilling at the same time. Moreover, the perfect riffs by both Eric Peterson and Alex Skolnick are mightily enhanced by the thunderous beats blasted by the juggernaut Gene Hoglan, making the lyrics sound even more meaningful in the end (“They’ve taken the tablets and hidden the scrolls / To deceive the ones they protect / The truth of creation, mutation of man / Entombed in the vatican walls”), with the song’s heavier-than-hell ending being just the icing on the cake. And it looks like their Thrash Metal onslaught has no time to end based on the amazing The Pale King, where it’s possible to savor the potent sound emanating from each instrument due to the crystal clear production of the album, in special the rumbling weapon carried by Steve Di Giorgio. In addition, Chuck treats us all with another of his flawless performances on vocals in this rhythmic and raw composition, something only a band like Testament can provide. 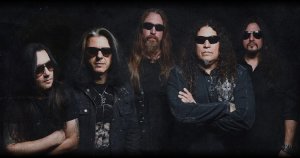 Stronghold feels like a tribute to themselves and to the golden years of Bay Area Thrash, a fuckin’ kick-ass mosh pit-generator with bestial vocals and even more bestial backing vocals with the guitars by Eric and Alex penetrating our bones and lacerating our spinal cords mercilessly. In other words, this is a sonic orgasm for fans of fast and furious Thrash Metal from the 80’s, and I guess I don’t need to repeat myself and say it will sound absolutely perfect when played live. Following that thrashy storm, we have Seven Seals, showcasing beautiful guitar solos by Eric and Alex as well as intelligent and meaningful lyrics powerfully declaimed by Chuck, all embraced by heaviness to the second power, and it doesn’t matter if Gene is playing at full speed or if the song demands groovier and more rhythmic beats, he always delivers. And Born in a Rut, another groovy composition with fierce drums and a more serene (but also obscure) aura, concludes the first half of the album on a high note, perfect for enjoying a cold a beer while banging your head to another lesson in heavy music by Testament.

Another sensational hymn by Chuck and his unstoppable horde in undoubtedly Centuries of Suffering, where the dynamic duo Eric and Alex are once again on fire with their boisterous guitars, delivering riffs and solos that sound like if they were forged in the fires of the underworld. Not only that, what Gene does with his drum kit at around two minutes is truly impressive, increasing the song’s quality and ferocity to a whole new level. That guy is indeed a human wrecking machine. In Neptune’s Spear (a beautiful name for a first-class song), I can’t decide if the pounding drums by Gene or the blazing guitar riffs and solos by both Eric and Alex are the best elements of it, not to mention the aggressiveness brought forth by Steve and his unique bass sounds; whereas Black Jack is the ultimate soundtrack for an insane cards game “in the city of sin”, with its straightforward lyrics being boosted by its demolishing instrumental.

I’m neither pro nor against the theme explored in Canna-Business as I believe each one of us has the freedom to do whatever we want with our lives, and that’s why I want to focus on the music itself rather than on the discussion if that’s right or wrong. The whole song is evidently overpowering and electrifying, as expected in any composition by Testament, a high-octane chant with Chuck barking like a beast as well as providing some really deep vocals and vociferations. And lastly, The Number Game keeps the fire of Thrash Metal burning high and bright, with the performances by Chuck and Gene trespassing the frontiers of aggressiveness. No words can describe their awesomeness, especially the crazy beats and fills by Gene, therefore I suggest you simply go listen to it nonstop and don’t forget to break your fuckin’ neck headbanging to its brilliant hellish riffs.

There’s a series of videos on Nuclear Blast’s YouTube channel where Testament discuss each song of the album, their inspiration to write Brotherhood Of The Snake and the ancient alien theme, among other topics, like you can see for example HERE. I personally recommend you go watch those videos to get more involved with such an epic album, and of course if you’re planning on buying this instant classic just go for the Limited Edition Book Boxset, which includes the CD, the complete album on five brown 7 inch EP’s, an oversized 7 inch booklet, a 40×60 inch poster flag and a metal pin. Join the Brotherhood of Thrash Metal spearheaded by Testament, one of the heaviest, most technical and most electrifying bands on the entire planet or die. As simple as that.

Best moments of the album: Brotherhood of the Snake, Stronghold, Centuries of Suffering and The Number Game.

Worst moments of the album: Obviously none.