A solid album by a multi-cultural band that invites us all to go to war to the sound of their sharp Melodic Death Metal. 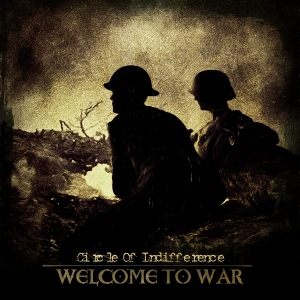 After listening to the brand new concept album by Melodic Death Metal band Circle Of Indifference, entitled Welcome To War, you might not believe in what I’m going to say about this interesting project recommended for fans of bands like Death and Carcass. Founded in 2013 by Swedish multi-instrumentalist Dagfinn Övstrud in the city of Hönö, Sweden, and having already released their debut album Shadows of Light, in 2014, Circle Of Indifference are a band where none of its members have ever met in person. I’m not joking. Apart from the band’s mastermind Dagfinn on guitars, bass and additional keyboards, Circle Of Indifference are Brandon L. Polaris on vocals directly from Belgium, Tyler Teeple on lead guitars representing Canada, and Kostas Vassilakis, a member of Progressive Death/Thrash Metal band Infravision, from Greece, on keyboards and drums. They use the Internet to communicate with each other, share their thoughts and ideas, record their separate parts in their respective homes, and everything is put together at the end of the recording process.

And although those four metallers are distant around 12,000km from each other in total, the final result is really good, sounding a lot more organic than many regular bands I know. The concept of the album, which presents the lives of two soldiers in World War II on either side of the conflict, starting from their enlistment at the early stages up until they come face to face during a battle at the end, helped the band members to stay focused and follow the same path while writing their parts of the music. The beautiful and melancholic cover art by Turkish digital artist and musician Aybars Altay, who resides in Germany and has already worked with another one of the bands reviewed at The Headbanging Moose (the excellent Norwegian Progressive Death/Black Metal act Maahlas), complements the intensity of the music in Welcome To War, putting a “face” to the story told by Dagfinn and his multi-cultural army.

Without further ado, it’s time to head to the battlefield to the sound of Conscription, bringing forward the heaviness of traditional Death Metal with the modernized atmosphere of Melodic Death Metal, not to mention how perfectly guitar riffs and keyboards complement each other. It’s a bit odd the name of the following song, Einbehrufung (Conscription), is the German translation for the title of the opening track, with its warlike ambience “torturing” the souls of the two main characters. In addition, the growls by Brandon L. Polaris lean towards old school Death Metal, reminding me of the vocals by Johnny Hedlund (Unleashed). Then a gloomy intro kicks off From This I Depart, before the amazing guitars lines by Dagfinn and the progressive drumming by Kostas suddenly fill all spaces in the music, getting more melodic than both previous tracks. 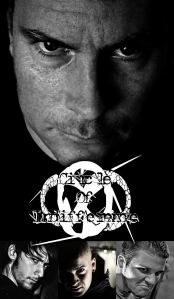 The storyline gets more and more exciting as it progresses, with the kick-ass Menschenmörder (Murderer Of Man), one of the most exciting moments of the album, also presenting a dark intro that evolves to a modern and heavy chant. Furthermore, the guitars by Dagfinn transpire electricity, effectively supporting the song’s lyrics about the torments inside the mind of a soldier (“Inside, a sea of mixed emotions that I still hide / I cannot show them what I really feel / Outside, I wear a mask of brutal terror untied / I cannot show them what I really feel / Inside”). The title-track Welcome To War begins by blasting some loud shots and explosions, giving the sense that we’re in the middle of a battle, with its straightforward Melodic Death Metal sounding working extremely well.  In other words, Circle Of Indifference keep it simple and the final result is awesome, with highlights to the additional layers brought forth by keyboards and backing vocals.

In Kein Entkommen (No Escape), which presents a solid mix of harsh growls and clean vocals, Kostas maintains the energy at a high level with his unstoppable beats, while Tyler, who is beyond superb with all his guitar solos throughout the entire album, might have reached a new level of finesse in this tune. The second to last war anthem by Circle Of Indifference, named Veil Of Despair, offers a more modernized approach than usual, while yet again another great duo of guitars and keyboards lead the musicality. Moreover, Brandon’s voice sounds more polished in this case, maybe due to the song’s sharper sonority, therefore expanding the sonic range of the band. The last track, Ein Akt Der Güte (An Act Of Kindness), is obviously an epic conclusion to the story told so far, with the exciting keyboards by Kostas once again adding fire to the music, as well as the mesmerizing riffs by Dagfinn. The lyrics to the song couldn’t be more realistic, with Brandon declaiming a soldier’s final words full of sorrow and anger (“As I rest against the wall / I take a breath and close my eyes / The British soldier takes my hand / I feel at peace it’s time to die / It’s time to die”).

As previously mentioned, how they managed to be so concise even with each band member being located in distinct parts of the world is beyond my knowledge, but that’s absolutely irrelevant when the final product sounds as compelling as Welcome To War. This is another great example of how heavy music unites us all, no matter where we come from, and if you want to know more about Circle Of Indifference go check their Facebook page, YouTube channel (where the full album is available for a listen) and SoundCloud page, with Welcome To War being on sale at the band’s BandCamp page, on iTunes and on Amazon. I guess their only “problem” right now might be finding a way to get together for live performances, because if there’s one thing that those gigantic distances didn’t stop those guys from doing was creating powerful and dynamic Melodic Death Metal.

Best moments of the album: Menschenmörder (Murderer Of Man), Welcome To War and Ein Akt Der Güte (An Act Of Kindness).

Released in 2016 Records Of Indifference