To the sound of the high-quality Folk Metal cast by this talented horde of roaring wolves, we shall travel towards the gates of North. 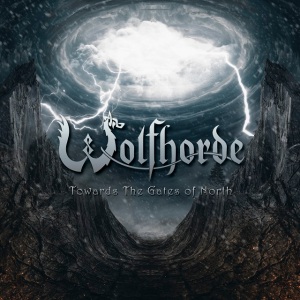 Get ready for a breathtaking journey through the realms of Viking mythology, an expedition from the beginning of the end to the beginning of a new world, also called as the North beyond the gates. Unspoiled by the reach of men, it served as the inspiration for Finnish Folk Metal band Wolfhorde in their first full-length album, beautifully entitled Towards The Gates Of North, a chaotic combination of opposites that will guide you across the northern landscapes together with this talented heathen horde.

Hailing from the city of Keuruu, Finland, around 300km north of the capital Helsinki, this power-trio incorporates heaviness, melancholy, joy, dynamism and history all at once in their music, offering fans of the genre a legit multitude of Norse hymns perfect for sharing a beer with your loved ones and get into the circle pit with your closest friends. The album art in Towards The Gates of North, designed by pnkfdARTS, shows the path we need to follow. It’s just a matter of hitting play now and joining these talented Vikings in their quest for the new world.

Vegvísir, the Icelandic word for a magical stave intended to help its bearer find his way through rough weather, appears in the album as an acoustic folk song warning that the journey is about to begin, before Fimbulvetr comes storming with its electrifying Folk atmosphere and bitterly cold lyrics (“This snowfall, lasted for days / I smell it in the air / Already the blood has been spilt / with frost arrived the fear”). In Norse mythology, this is the immediate prelude to the events of Ragnarök, meaning “Mighty Winter”, a perfect way to get fully immersed in the storyline put forward by the band. 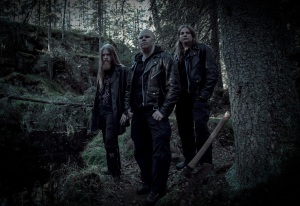 In Taivaankappaleiden Kato (which should translate from Finnish as “celestial roofs” or “celestial ceilings”), multi-instrumentalist Werihukka does an amazing job putting his Viking soul into each instrument played, while lead singer Hukkapätkä sends a message of pain and sadness through his harsh screams. Following that high-end Folk Metal tune, we have the fiery chant Death Long-Due, perfect for singing and prancing around the fire pit thanks to a great performance by Hukkapätkä on both vocals and drums. Besides, there are so many different instruments and elements accurately added to this metallic composition it’s hard to pick just one as its main driver. And accelerating things a bit, The Retribution is another solid tune that blends the best of Folk and Pagan Metal, and I’m sure it will generate some nice circle pits during their live performances.

Lovers of traditional Folk Metal will have tons of fun with Unyielding, an uncompromised song where, just when you think it’s going to slow down or lose some of its grip, all band members smash their instruments creating an amazing fighting atmosphere. But it’s in Boundless Agony that Wolfhorde step up their game by incorporating elements of Death Metal to their music, which end up elevating the song’s fierceness, and by presenting an inspired Werihukka guiding the music especially through his excellent guitar solos, while bassist Nuoskajalka effectively supports all his intricate work. In the brutal and melodic kick-ass tune Lycomania, a form of insanity in which a person imagines himself to be a wolf, the whole band speeds up the rhythm and goes absolutely mental, turning this into the best moment of the album in my opinion. And The Gates of North, their most epic tune and also the longest in duration, works as an exciting conclusion to their excruciating quest. A lot more symphonic and rhythmic than all previous songs, this chant sounds like a heavy torment, exhaling sorrow and agony until it reaches its climatic ending.

It’s easy to join Wolfhorde in their pursuit of a new world. Simply grab your Vegvísir, visit their Facebook page and YouTube channel, and grab your copy of Towards The Gates Of North at their BandCamp page or at the Inverse Records webstore. To the sound of the high-quality Folk Metal cast in the land of ice and snow by this talented horde of roaring wolves, we shall travel towards the gates of North.

Worst moments of the album: The Retribution.