…and the sun and the air were darkened by reason of the ungodly Blackened Death Metal cast by a demonic duo from Spain. 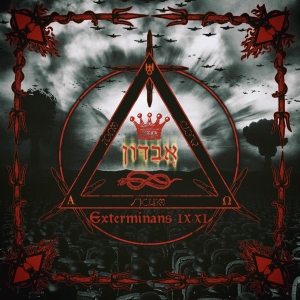 Tsar Bomb, or “Царь-бомба” in Russian, might be commonly known as the nickname for the AN602 hydrogen bomb developed by the Soviet Union, the most powerful man-made nuclear weapon ever detonated, but for the past few years it has also become a synonym to the cataclysmic music by Spanish Blackened Death Metal band Tsar Bomb. The force of impact of their compositions is immeasurable, crushing your soul inhumanely, but at the same time leaving you avid for more destruction and chaos after their extreme music raid ceases.

After the release of their debut album Neowarfare in 2012, this Málaga-based hellish duo is ready to scathe our society again with their brand new record, entitled Exterminans IX:XI, an album fundamentally inspired by the Book of Revelation, with even the writing of its lyrics being attributed to some sort of “help” by St. John the Apostle. Moreover, Tsar Bomb managed to merge in a very technical and aggressive way the esoteric side of the biblical scriptures with their belligerent and occultist vision of the world, offering the listener a wide spectrum of blasphemy, havoc and desperation.

Exterminans IX:XI begins with a nightmare-ish Intro where the smooth piano notes by guest musician Carmen Robles Jimenez bring some peace to our hearts amidst the song’s sheer ravage, before Ad Maiorem Legio Gloriam (“the greater glory of law”) comes bursting a brutal onslaught of Black, Death and Blackened Death Metal for our total delight. In addition, the band’s intricate instrumental artillery provides lead singer Ocram the perfect environment for his demonic growls, and although all drums are programmed, the music sounds very organic and alive at all times, which will make you simply forget about that minor detail.

The title-track, Exterminans IX:XI, is more than “just” a song about Abaddon, also known as the Destroyer or the Angel of the Abyss as portrayed in the Holy Bible (Revelation 9:11), it’s an even more vicious and intense tune, where six-string master Ivan does a superb job with his piercing guitar riffs enhancing its dark atmosphere and apocalyptic vibe; followed by Septem Tonitrua (“seven thunders”), an expression that also appears in the Holy Bible (Revelation 10:4), and obviously in the song’s lyrics (“Seven thunders burst, the angel has spoken / Under the oath, resounding horns / The Book of Initiation devoured by Leviathan / Inexorable storm, storm of ashes and fire.”). Their barbaric demolition goes on with another feast of blast beats, complex guitar lines and harsh growls boosted by some special voice effects similar to what Dimmu Borgir and other extreme bands usually do. Put differently, this killing tune will auspiciously dilacerate your mind before reaching its climatic and desolate ending.

In Armada (Mari Bestiam), which refers to the Spanish Armada of 1588, Tsar Bomb translated the monstrous power of the armada into a dark and robust tune, with highlights to the hints of progressiveness and modernity added to this technical Extreme Metal composition by Ocram and Ivan; while Caustic Blessing is a high-speed violent chant where yet again drums do not feel like they’re programmed at all. Can a human drummer replicate this sonority live? Anyway, this is a very good example of how amazing the band sounds no matter if they add symphonic or progressive elements to their music or if they’re as raw and direct as possible like in this case.

In the excellent …And Spill thy Fire Upon the Earth, prepare your neck for a lot of pain from headbanging because Tsar Bomb sound like a wild beast attacking you directly in the jugular, offering a multi-layered infernal Black Metal exhibit where vocals by Ocram get even more diabolical and in sync with its scalding lyrics (“The reign of chaos spits its fire / With hall and blood scorching the life / With flaming soil the waters died / And Spill Thy Fire Upon The Earth!!”). And finally, Mikaheylel reminds me a lot of the sonority found in The Satanist, by Behemoth, especially the blasphemous aura surrounding the music. You can feel hatred and despair emanating from its riffs, which ends up being frightful but mesmerizing at the same time, reinforcing this extremely well-crafted chant that perfectly represents what Blackened Death Metal is all about. There’s still time for a disturbing Outro to close this marvelous album, with the piano by Carmen returning in a very melancholic pattern, turning it into the soundtrack to a desolated war field after the detonation of a deadly nuclear weapon.

In case the sonic detonation ignited by Tsar Bomb helped release your inner demons, you can find more about their work on their official Facebook page and SoundCloud, and also find Exterminans IX:XI for sale at their BandCamp page or at the Cimmerian Shade Recordings’ BandCamp page. There’s an interesting excerpt from the Bible, Revelation 9:2, which states that “And he opened the bottomless pit; and there arose a smoke out of the pit, as the smoke of a great furnace; and the sun and the air were darkened by reason of the smoke of the pit.” Replace the smoke of the pit with the disturbing Blackened Death Metal by Tsar Bomb, and there you have a suitable depiction of how vile this Spanish duo can be.