Get ready for this Progressive Doom Metal band with a strong theatrical vein directly from the beautiful Norway. 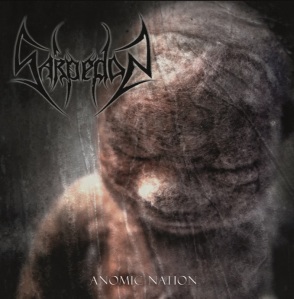 Afters years in the making, the music journey named Anomic Nation, the debut album by Norwegian Progressive Doom Metal band Sarpedon, is finally among us. For those of you who don’t know Sarpedon, this very technical band is led by brothers Torgeir and Eirik P. Krokfjord, who have been working together on this project for several years, influenced by distinctive bands such as Savatage, Emperor and Queen, and adding their own experiences and emotions into their music to give it a fresh taste.

Despite its Black Metal-ish album art, Anomic Nation is a lot more melodic and less violent than pretty much all Black Metal bands you might think of, thanks a lot to the “theatrical” vocals by Eirik P. Krokfjord. The guy, who has two singing degrees from the Norwegian Academy of Music, doesn’t limit himself by only singing the songs, he basically declaims the lyrics in all of them, as if the the Phantom of the Opera decided to form a heavy music group. That might be one of the greatest strengths of Sarpedon, and definitely what will hold your attention throughout the entire album.

When the music kicks off with the very atmospheric and eerie title-track Anomic Nation, it’s impossible not to think of bands like Swedish Epic Doom Metal Candlemass or Danish Heavy Metal icons Merciful Fate, as all of their characteristic elements are present in Sarpedon’s music boosted by some traditional Black Metal blast beats. If you don’t understand what I’m saying, take a listen at this powerful song by Candlemass and everything will make sense. This great Doom Metal track is followed by The Lusk Letter, where the band showcases an even more progressive musicality, guiding the listener through a theatre of virtuosity and darkness, and The Claustrophober, which gets even more obscure thanks to its church organ keyboard notes, moving towards more traditional Doom Metal. And pay close attention to the beautiful lyrics in this song, it’s totally worth it. 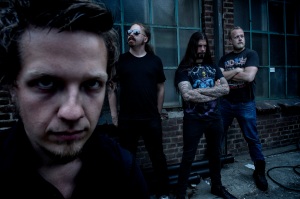 Sarpedon speed things up a little in Dead Birds, with its lyrics being even more freakish and drummer Carl Engstrøm kicking fuckin’ ass: it’s impressive how he can go from raw Black Metal to smooth progressive music in a matter of seconds, without sounding robotic or generic. Then we have the beautiful A Seed of Evil, an inspiring work of art that could be summarized like a “forbidden tenderness” (if that expression even exists), and The Carnival, where what seemed to be a melancholic tune suddenly turns into fast and raw metal, getting back later in the song to pure progressiveness with some interesting rhythmic breaks, somber guitar riffs and a nice theatrical chorus (“Look behind the mask / Before it is too late”).

The band saved for last the duo comprised of My Mysteries Unwind, Part I, a smooth but sinister “intro” to its second part, focusing heavily on its intense keyboard notes, and My Mysteries Unwind, Part II, the boldest and most symphonic of all tracks. It’s indeed a mysterious journey that transpires Doom Metal, varying between heavier riffs and more melancholic passages, with its precise drumming keeping it energized and all elements of the last part of it showcasing how crazy and progressive Sarpedon can be.

If you’re a fan of Candlemass, Mercyful Fate, Queen and all other rock and metal bands with a ravishing theatrical side, don’t wait any longer and go grab your copy of Anomic Nation at the official Inverse Store. It’s good music that will satisfy your craving for a good story while you bang your head, do some air guitar or keep tapping on your desk, and if you let yourself go with each song you will probably find yourself doing that for hours, completely enthralled by Sarpedon’s full-bodied music.

Best moments of the album: Anomic Nation and A Seed of Evil.

Worst moments of the album: The Carnival.