Lots of horsepower, groove, great riffs and strong vocal lines are just some of the things you’ll find in the amazing new album by Sully Erna and his bandmates.

American Alternative Metal/Rock icons Godsmack have always split opinions among headbangers all over the world in regards to their music: are they heavy enough to stay away from the abhorrent Pop Music world, or too soft to be included in the select group of Heavy Metal giants such as Iron Maiden, Metallica and Megadeth? Well, although I’ve never been a huge fan of the band, I’ve always enjoyed the musicality produced by Sully Erna and his crew, considering them a band that is able to combine the “best of both worlds” and deliver their fans lots of memorable heavy music anthems.

Maybe the biggest issue with Godsmack is the fact they do not regularly release new albums: since their beginnings in 1998, they have launched only six studio albums (including their brilliant self-titled debut album), which is not a lot taking into account they have almost 20 years of existence. However, when they do release new material, it usually kicks fuckin’ ass, which is the case with their brand new album 1000hp, the sixth in their career. It might have taken them almost four years to launch the follow up to their 2010 gold-selling album The Oracle, but as I said it was worth the wait.

All the energy (or maybe I should say all the “horsepower”) fans have been eagerly expecting for the past four years is already found in the title-track, 1000hp, a song that translates the legacy of Godsmack into modern and thrilling Hard Rock, with powerful riffs, outstanding vocals and a chorus that truly credits it to become a Rock N’ Roll radio hit without any doubt. Add to that the following track, the also excellent FML (an acronym for “Fuck My Life”), and you’ll start getting addicted to this album: this is the type of song you know it’s Godsmack, with all those heavy riffs we learned to love since their early days.

Although Something Different, an alternative track that flirts with more contemporary rock music, doesn’t keep up with the same level of electricity from the previous tracks (especially due to its generic lyrics), everything gets back on track with What’s Next?, an excellent track that will sound amazing on their live performances and that seems to be extracted from their debut album thanks to its raw sonority, with highlights to the drumming dictating its pleasant rhythm. 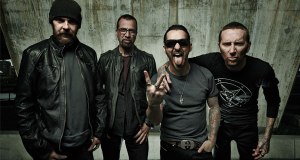 Generation Day showcases a more experimental Godsmack in terms of the sound each band member can take from their respective instruments, with kudos to guitarist Tony Rombola for the excellent groovy guitar solo in the middle, while Locked & Loaded couldn’t be more awesome than that: it’s pure Southern Rock totally inspired by Sully Erna’s never-ending feud with Mötley Crüe’s bassist Nikki Sixx, which is the reason why it’s track number SIX, got it? Honestly, those two should have a match at Wrestlemania or at least at SummerSlam one day, that would be really fun.

Then we have Living in the Gray, a song with hints of Alice In Chains and a very repetitive chorus, which fortunately doesn’t turn it into a bad song, and I Don’t Belong, a very traditional Godsmack tune which kind of continues where the previous song ended, with Sully’s great vocal performance enhancing its overall quality. And closing the album, Godsmack offer us Nothing Comes Easy, which despite having one of the heaviest riffs of the whole album ends up being too experimental and could have been a lot better if a little shorter, and the melancholic, intense and addictive semi-acoustic track Turning to Stone, some kind of “Voodoo 2.0” which will feature on The Walking Dead’s compilation Songs of Survival Volume 2, and by that you can imagine how good this song is, right?

And what about the album art, which perfectly matches its title, featuring of course the band’s traditional sun logo and a classic car emerging from the flames? Albeit quite simple, it’s totally effective, just as the whole album is. 1000hp might not be a masterpiece nor the most creative album in the world, but it’s a superb collection of kick-ass Hard Rock tunes that will surely please all Godsmack fans, from the most diehard to the new ones, and provide some very good moments to everyone attending their live concerts, enjoying a road trip, having a party or simply relaxing headbanging alone at home. I’m pretty sure that’s what everyone in the band wanted when they recorded 1000hp.

Best moments of the album: 1000hp, FML, Locked & Loaded and Turning to Stone.

Worst moments of the album: Something Different and Nothing Comes Easy.