A very professional and vigorous album of alternative heavy music enhanced by an amazing feminine touch. 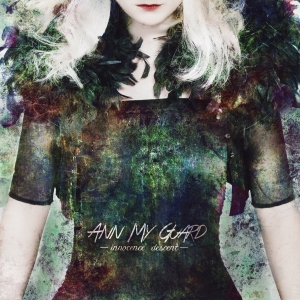 I’ll be honest with you and admit Alternative Metal has never been on my top picks whenever I want to listen to music. As I’ve said a couple of times here, I usually stick to the foundations of Heavy Metal. However, sometimes it’s interesting (and good for your brain) to listen to bands outside of this traditional world, especially when the band is as technical and pleasant as Hungarian “Doll Metal” band Ann My Guard, who have recently released their debut album, the energetic Innocence Descent.

This 4-piece band from the stunning city of Budapest, Hungary, took around six long years to thoroughly write the whole album, a process that might look too exhausting at first but that was definitely worth every second and penny spent in the end. Produced by the most renowned producer in their native Hungary, Gábor Vári, the album couldn’t sound more professional and ready for the absurdly competitive and demanding music market than that: Innocence Descent is a great mix of Alternative Metal and Rock with a huge focus on melody and harmony (something commonly done by most European bands), which will please fans of Evanescence, Hole, Kittie, H.I.M. and all other bands that are part of that more “delicate” side of heavy music.

As soon as the interesting intro Enchant begins, you can already notice all the band’s aforementioned influences, which becomes even clearer in Grey Witch, with its Alternative Metal riffs and the smooth vocals by Eszter. Moreover, its high-end production and the excellent chorus make it an excellent option for becoming a radio hit. Another important detail in Innocence Descent are the lyric themes, with pretty much every song talking about women, witches, sex and all other taboos present in the feminine world.

Getting back to the music, it seems the band loves deep key notes such as the ones found in Dark Sea Blue, a song that flirts with Pop Rock without losing that heavier approach from Alternative Metal, and the melancholic Ivory Ballad. Then we have the strong bass lines and nice drumming from Crush Honey, which sounds like some old songs from Hole, and the awesome rhythm from the powerful Morgana’s Song, another excellent example of how Ann My Guard took care of all details in their musicality to sound as professional as possible. Once again, I should say this song could easily be played in any Rock N’ Roll radio around the world. 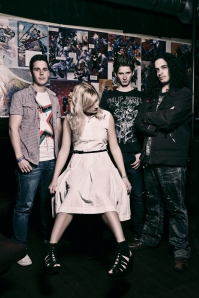 The next part of the album slows things down a little in a very introspective way, starting with the short acoustic ballad Hollow Red (which focus 100% on Eszter’s voice to enhance its atmosphere), followed by another ballad, My Lullaby, with beautiful lyrics and lots of harmony, and Easy, a melancholic tune with highlights to the good work done by guitarists István Tagcherer and Krisztián Varga both in the slow and the fast parts of the song. But it’s when the band accelerates their music that they hit the bull’s-eye in my opinion: H.K.A. Bitch has lots Punk Rock elements blended with Nu Metal, which together with its heavy riffs and acid lyrics turn it into a perfect choice for entertaining a more energetic audience during their live performances; while the vigorous Fallen follows a similar pattern as the previous track, boosted by some rhythmic variations and a delicate but strong chorus.

And lastly, Ann My Guard offer us the semi-acoustic ballad Gone, with highlights to the good guitar solo at the end of the song, and Circles, a unique Pop Rock track that gets heavier halfway through the song before fading into a melancholic rhythm to close the album.

You can take a good listen at the entire album HERE, and also support Ann My Guard by purchasing their official merchandise, or a digital copy of the album on iTunes or Amazon. As I said before, if you’re a fan of alternative heavy music with a feminine touch, Innocence Descent is indubitably one of the best new options in the market. I’m pretty sure all members of the band are proud of their “baby”, and you won’t be disappointed at all with the professionalism and vitality of their music.

Worst moments of the album: Dark Sea Blue and Gone.