“The Ministry of Rick and Daryl” warns: drinking and killing innocents will put you into a lot of trouble.

If you haven’t seen Indifference yet, I suggest you scroll down to the end of this post first and watch the entire episode before reading the rest of the text. 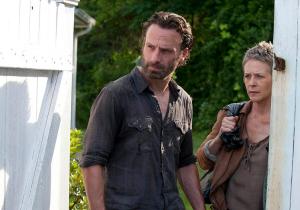 If we thought the previous episode didn’t have a lot of action, Indifference was even worse. Despite a couple of walkers being killed by Daryl’s crew and only one by Rick, the rest of the episode was based on conversations, decisions and some character development. It wasn’t a bad episode, but it wasn’t a good one either (especially for Carol).

The episode was pretty much divided between Rick and Carol searching for supplies, although that was not what Rick really had in mind when he invited (surprise!) Carol to go with him; and the team composed by a crazy Tyreese, a sociable Michonne, an alcoholic Bob and a badass Daryl also looking for antibiotics and other medication for the people at the prison infected by the deadly virus. And that was it, there was no Carl, no Maggie, Beth, Glenn or any other known character.

In my opinion, the opening dialogue between Rick and Carol was among the best of the entire show: it was just as if they were the top mic workers from professional wrestling “studying” their competitors, focusing on Carol’s decision of killing the infected Karen BEFORE she actually died. When they had that dialogue and I saw Rick’s famous “I’m gonna kill you” face and some knives, I thought that was the end of Carol. Those two extra characters, the guy and girl that were hiding in a bathroom for two days because of one single zombie in pajamas, were used by Rick just to corroborate his original plan: casting Carol out of the group for not being “human” anymore. We all know that might not have been the best decision, because cold-hearted Carol will come back for sure and might be screaming for vengeance, maybe with the Governor by her side. The only thing that’s certain is that Rick doesn’t want Carol close to his son and daughter or close to anyone else at the prison, and he will kill her for sure if she tries to get back.

Regarding the other group looking for medication, what we saw was an insane Tyreese trying to commit suicide by releasing some walkers over himself, and looking really desperate because his sister Sasha was going to be dead soon. Michonne tried to give him some advice on what to do and what not to do when you’re angry, about the horrible consequences of using anger as your only reason for anything, but she was caught by Tyreese when he asked her about her chase for the Governor. I might be wrong, but Michonne is probably just acting like a good girl until she finally puts her hands (and sword) on the Governor, and Tyreese kind of noticed that. He’s not going to be stupid to try stopping her, but the message he was trying to send to Michonne was “you got your business, I got mine.”

And finally, there’s that alcoholic idiot, Bob. He’s so sloppy and not focused that it’s hard to believe he has survived for so long. Daryl and Michonne know he’s trouble, we all saw he was the one responsible for the “zombie rain” on the 30 Days Without an Accident episode, he didn’t get any medication in his bag for the infected just to get a stupid bottle of whisky, so what else needs to happen for the group to get rid of that moron? He will do more shit, that’s for sure. Let’s just hope no one we like gets killed because of him, and also that next episode has more action and less talking.